THIS IS HOW YOU DO LAETARAE SUNDAY! EAT YOUR HEARTS OUT!

Did your parishioners wear rose to Mass this Laetarae Sunday? 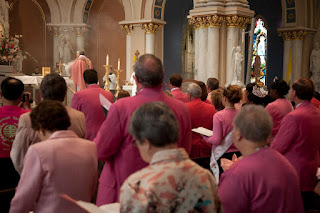 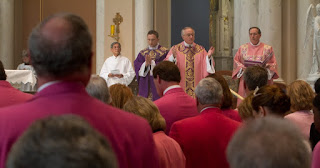 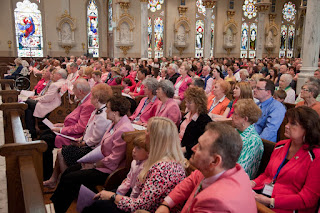 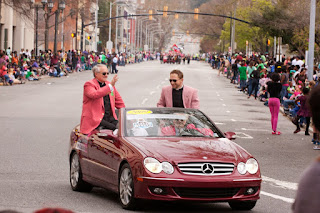 Not so bothered about the deacon as I am by the dolly-bird in clerical choir dress. Is it his girlfriend?

Tsk, tsk, John? He's wearing a wedding band, so she can only be Mrs. Deacon. The insufferably officious wives of some hen-pecked deacons I've known provide a strong argument against married clerics.

Glad others gave voice to that observation. I like the idea of the community celebrating, but the masthead is a little too ecumenical for my tastes. I apologise for sounding so ungrateful.

Father,
You are obviously doing wonderful things at your parish. However, if you must use female servers, please don’t have them dress in cossack and surplice. The cossack is a male cleric’a garment and its use should be restricted to males. Otherwise, keep up the good work.

If the cassock is a "male cleric's" garment, then non-cleric altar boys should not be wearing them, either.

Now, if the garment may be worn by a stand-up for the cleric, then a girl, as a stand-in is properly attired in one.

Since when have congregations taken to dressing in the liturgical colour of the day? (With the obvious exception of wearing black for funerals.) It sounds a bit naff to me.

Anonymous at 7:40 reeks of the Eau de Kavanaugh

In many years of attending TLM's, I've never ever seen even a single pink coat in an EF Gaudete or Laetare Sunday congregation. Evidently this is a strictly Novus Ordo phenomenon. Surely there's some deep underlying reason for this particular EF-OF bifurcation. But what is it?

Indeed. He is a master of the non-sequitur. A man or boy may stand in for a cleric according to long-standing custom, but 'ex temporanea deputatione'. He is not in the clerical state, but is technically not excluded from it, and his assumption of clerical choir dress (cassock and cotta) is appropriate. A woman or girl can never aspire to the clerical state, so the adoption of such vesture is not appropriate.

No way would I put on a pink sports jacket!!!

these photos are from sometime when the Macon Georgia Cherry Blossom Festival occurred during Lent. The parishioners are probably dressed to mark or attend the festival occurring that week.