I'VE ALWAYS HAD AN AFFINITY FOR THE BENEDICTINES 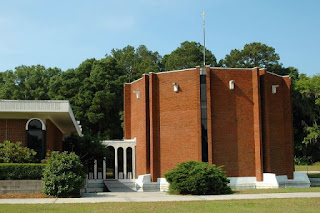 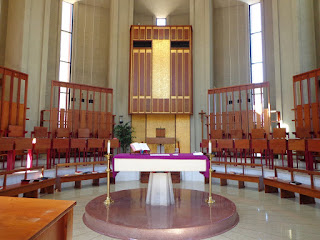 Savannah has a Benedictine Priory and an all boys Benedictine High School (BC) attached to it. There are about 7 priests and brothers in residence. It is a humongous priory. These Benedictines are out of Latrobe, Pennsylvania.

For the Benedictines, March 21 is one of their major Solemnities. It is the death of Saint Benedict.

Thus the priests of the Savannah Deanery along with our bishop and bishop emeritus were invited for Solemn Sung Vespers and dinner, with a happy hour after vespers. Be sure to mark this, Makers Mark is my favorite bourbon and they had it!

The meal was delicious.

But back to Solemn Sung Vespers. It was chanted in English and I had forgotten how much better it is the pray the Office in community rather than alone, with the temptation to rush through it in order to get it over with. And Chant in English is just lovely. Isn't it too bad that those in authority in the hierarchy don't insist that the Catholic laity have the ability to chant at Mass as the normal aspect of the Sung Mass?

The Superior General of the worldwide Benedictines (who is out of the Conception Benedictine Monastery in Missouri but now in Rome) will be visiting the Priory shortly.

He was named Superior General more than a year ago. And oddly enough when I was in Rome on my month long sabbatical, a group of us went out to have some gelato not far from St. Peter's and the new Superior General was there in full habit with some other Benedictine dignitaries. I had a nice chat with him.
Posted by Fr. Allan J. McDonald at Thursday, March 22, 2018

The office is always so well chanted in large groups! Sounds very nice. I didn't know you enjoyed bourbon, as a good Kentuckian I will bring a few treats the next time I am in Savannah! God Bless!

How OF vespers can be celebrated (in ordinary places like Georgia and Tennessee):

Actually, Benedictines don't have a "Superior General." Each Abbey is autonomous.

They have an Abbot Primate whose duty it is to be a liaison to the Holy See and to civil authorities, to promote unity among the various autonomous Benedictine monasteries and congregations, and to represent the order at religious gatherings around the globe.

it is pathetic that these Benedictines aren't chanting Vespers, in whole or in part, in the Church's liturgical language, Latin. It was never envisioned by Vatican Disaster II that the office would be celebrated in the vernacular, although maybe the evil Bugnini did

SACROSANCTUM CONCILIUM 101. 1.
In accordance with the centuries-old tradition of the Latin rite, the Latin language is to be retained by clerics in the divine office. But in individual cases the ordinary has the power of granting the use of a vernacular translation to those clerics for whom the use of Latin constitutes a grave obstacle to their praying the office properly.

I wonder whether every priest reciting his obliged divine office in the vernacular has been individually excused by his bishop on the basis of verified ignorance of the language of the Church.

LOL. I suspect this exception was intended to cover some religious sisters and brothers. Bishops, of course, are supposed to ensure that their seminarians learn Latin so the exception couldn't possibly be intended for priests.

And why hasn't the following paragraph of SC been obeyed either:

100. Pastors of souls should see to it that the chief hours, especially Vespers, are celebrated in common in church on Sundays and the more solemn feasts. And the laity, too, are encouraged to recite the divine office, either with the priests, or among themselves, or even individually.

If not Vespers on Sunday afternoon, why not Vespers on Saturday evening, instead of the falsely named Saturday vigil Mass (actually an anticipated Mass instead) that's contributed much to the demise of the Sunday Day of the Lord in the lives of many Catholics?

Didn't you know that portions of Sacrosanctum Concilium which are unpalatable to "progressives" are optional? I think it is in a hidden footnote