THIS SUNDAY, MARCH 18, 2018 IS PASSION SUNDAY! ONLY FOR THE EF THOUGH! YOURS TRULY THE CELEBRANT FOR THE CATHEDRAL'S EF MASS AT 1 PM IN DOWNTOWN SAVANNAH! BE THERE OR BE SQUARE, LAFAYETTE SQUARE THAT IS--AND THE DAY OF SAINT PATRICK'S DAY 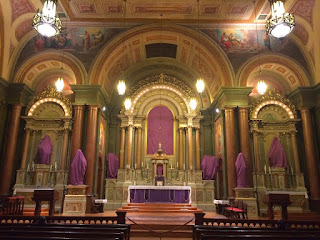 In Savannah, we are in what is called the "Season of Saint Patrick." The secular press is calling it that and it is true. Lent always takes a backseat to the drinking, gluttony and partying of the Season of  Saint Patrick. Sigh!

In my OF parish, our statues have been covered this week in anticipation of Passiontide which the OF Roman Missal gives a nod, but they aren't sure why. We are allowed to cover cruxifix and statues, but we don't have the EF's Gospel for the First Sunday of Passiontide to have a reason to do so.

The OF Roman Missal also has two proper prefaces for the Passiontide two weeks. But no reason it given and it isn't called passiontide. Sad and Sigh!

Do you know the reason? It is from St. John's Gospel for the First Sunday of Passiontide:

"They took up stones therefore to cast at Him: but Jesus hid Himself, and went out of the temple."

DOES YOUR OF PARISH AND LITURGY HAVE COVERED CROSSES AND STATUES?

Hasn't Kavanaugh volunteered to help you out? That's not nice

In this part of the USA, St. Patrick celebrating began on Monday and will likely conclude Saturday night. While it is nice that the holiday doesn’t occur on a Lenten Friday, it does land on a Lenten Saturday. I wonder if a dispensation will be given so that the seasonal violet vestments might be replaced with green for the vigil Mass on Saturday night?

Green vestments? You've got to be kidding but you just placed your finger on what is wrong with the Novus Ordo - unbridled customization to fit the tastes of the celebrant and the folks on the liturgy committee. Blech

Green vestments, yes I was kidding. Sadly someone on this planet will think it a grand idea.

Anonyous, true. I guess in the best 1960s parlance, they would deem that being "relevant."