RITA DOES IT AGAIN AND THIS IS QUITE EMBARASSING 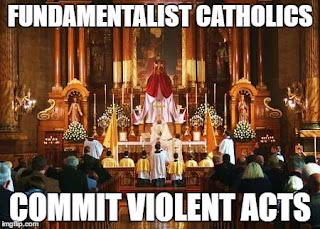 Here is another little ditty from Rita at Praytell concerning calling an African a fundamentalist:

Gerald Arbuckle’s recent book, Fundamentalism At Home and Abroad, may be helpful in sorting this out. He makes it clear that biblical fundamentalism is not the only kind, and that fundamentalism arises in response to what he calls “cultural trauma.” This is spot on, and a consistent refrain in Sarah’s published writing and speeches.

He further quotes Pope Francis in saying that fundamentalism is found in all religions. It is a widespread phenomenon, and certainly includes Catholics.

“Fundamentalists are people who are outraged when they see the world around them abandoning the religious values they hold dear” Arbuckle writes. “They are fighting back in the cause of what they consider truth. They are reacting to threats to their identity in militant ways, whether in the use of words and ideas or ballots or, in extreme cases, bullets and bombs. The responses to these threats are simplistic and those who question them are branded intolerantly as enemies of the truth.”

... Certainly many other African prelates are untouched by fundamentalism: Cardinals Turkson and Onaiyekan spring to mind, not to mention Zerbo, Kutwa, or Ouédraogo.


My comment: How ironic! If you read Rita's quote of Arbuckle I highlight in blue, isn't she doing exactly the same thing against Cardinal Sarah????????????  And while not using bombs and bullets, using character assassination in her diatribe against the good Cardinal to accomplish her goal of discrediting Cardinal Sarah since (She is) fighting back in the cause of what (she) considers the truth and intolerantly branding him an enemy of the truth?

Like so many racists in the south who say, well, there are some good blacks and name them, so does Rita in naming those African cardinals, unlike other African cardinals, who aren't fundamentalists. WOW! JUST WOW!
Posted by Fr. Allan J. McDonald at Friday, March 02, 2018

She's a sick woman. I suspect she votes for the Abortion Party every election.

Identify a group of your co-religionists you dislike. Invent a label for them which sounds suitably pejorative, and then define it to suit your prejudices. Better still, get a left-wing 'cultural anthropologist' who also happens to be a dissident priest to define it for you, and enthusiastically endorse the way he applies it, with a very broad brush, to those with whom he disagrees. Well done, Rita.

It goes without saying that for Arbuckle, all Catholics who do not align themselves with the 'progressive' faction are 'fundamentalists' with all that that implies (and like most self-opinionated left-wingers he can loftily disregard their arguments since they are clearly irrational). Twenty-five years ago he published a book 'Refounding the Church' in which he lamented the 'backward' direction the Church was taking.

Predictably (since this parvum opus only appeared last year) Trump supporters get the palm for fundamentalism, but so do Brits who are disenchanted with the EU, and not just the majority who voted to leave; also those in England, Scotland and Wales who don't want to see the dissolution of the UK.

Arbuckle is not only glib, condescending and superficial, he also throws in a lot of half-baked psychology and large dash of sanctimoniousness. Those who refuse to swallow his tendentious left-wing garbage are (needless to say) acting contrary to the Gospel.

Actually the term 'fundamentalist' was adopted in the late 19th/early 20th century by Protestant biblical scholars who opposed the excesses of the 'modernist' historical-critical school which questioned such things as the Virgin Birth, the miracles of Jesus and his physical resurrection. During the pontificate of S.Pius X (1903-1914) Modernism was condemned as the 'synthesis of all heresies'. All orthodox Catholics are ipso facto fundamentalist.

According to modernists like Arbuckle, those who actually believe in what the Church has always taught are suffering from 'cultural trauma' which leads to fundamentalism, characterized by a plethora of undesirable behaviours. No doubt Rita would object to being labelled a modernist, which would suggest heresy, but how else would you categorize her and her ilk?

Since the rise of Islamic terrorism, 'fundamentalist' has been used as a synonym for 'extremist'. Yet non-extremist Moslems would maintain that a fundamentalist approach to the Koran and Hadith is an antidote to extremism, and that the terrorists are perverting Islam (in much the same way that the modernists are perverting Catholicism). A nice irony.

A wonderful reminder of how the plain meaning of words can be surverted to serve ideological purpopes. They must teach composition very well in England. I have a British son-in-law who expresses himself like you do, with clarity, precision, and in a very engaging style

"The Fundamentals" was a series of 12 books published in the early 1900's. At least hereabouts, the term "fundamentalist" was applied to those who subscribed to the tenets of those works.

I think that the Fundamentalists are not opposed just to "excesses" of modern biblical scholarship, but to the whole enterprise.

Perhaps you might care to enlighten us as to why those who adhere to the teachings of the Church as set out in the Ordinary and Universal Magisterium (which Catholics hold to be free of error) should be stigmatized by a dissenting and modernist priest (whose speciality is social science) with the use of a deliberately loaded term which by his own definition can be applied to at least half of the human race - which makes them obviously wrong since it is an axiom of the political left that they are rational and right whereas their opponents are irrational and wrong.

In the meantime, read the book and then give us the benefit of your critical faculties.

John Nolan - I don't. You confuse the use of the term "fundamentalist."

It refers to those who are Biblical literalists.

The Catholic Church does not approach Biblical interpretation in that manner.

Read this and give us the benefit of your faculties: "Should Catholics take the Bible literally? If by literal we are referring to the intention of the author, then yes, Catholics do take the Bible literally. For such a literal reading respects the author's intention it reads poetry poetically, metaphors metaphorically, and history historically. The aim of interpreting the Bible is to discern what the author intended by the words he used. For example, when we read that Jesus says it is better to lose a member of one's body than to sin, we understand that Jesus is teaching about the gravity of sin through hyperbole. We do not take Him as literally commanding dismemberment. Some misreadings can be more costly than others, which is why Origen's literalistic reading of these words of Jesus (Origen supposedly castrated himself) is an example of the consequences of interpreting words without regard for their rhetorical genre.

Reading literally should mean reading for the author's intention. In our culture, however, there is much ambiguity in the use of the word "literal." Indeed, many will misunderstand our meaning if we claim to read the Bible for its literal meaning, taking that as a slavish bondage to the surface value of Scripture's words. A more winsome way to phrase one's response is to say that we do not take the Bible literally but rather literarily. In that way we avoid the pitfalls of literalism and still retain historical accuracy, such as the Resurrection. We must hold together the semantic range of the words used, the author's intention, and the larger context of both the words and the author. In doing so we will be poised to read Scripture in "3-D," open to all its potent literary meaning stemming from the author's words and their context."

Read this, also: "110 In order to discover the sacred authors' intention, the reader must take into account the conditions of their time and culture, the literary genres in use at that time, and the modes of feeling, speaking and narrating then current. "For the fact is that truth is differently presented and expressed in the various types of historical writing, in prophetical and poetical texts, and in other forms of literary expression."7

Whom are you quoting, and to what purpose? Arbuckle does not restrict the term 'fundamentalist' to those who insist on a literal interpretation of Scripture. This was the substance of my argument, but, true to form, you make no attempt to address it. You must be getting close to the bottom of your capacious barrel of red herrings.

John Nolan - neither you nor Arbuckle get to define terms to your liking or preference. "Fundamentalism is a plague and an inaccurate methodology for understanding the written word whether in Sacred Scripture or doctrinal statements about Catholic belief.

That's not how Catholics approach either.

Again, you do not attribute your quotations, so one does not know whose definition you choose to regard as definitive. Do you accept doctrinal statements of the Ordinary and Universal Magisterium or do you qualify them by applying a 'non-fundamentalist' methodology of your own choosing? (I don't expect you to answer this, since it is the sort of direct question you always avoid answering).

John Nolan - Since the Church and her Bishops do not read the statements of the Ordinary and Universal Magisterium in a "fundamentalist" way, neither do I.