THIS IS VERY SAD AND VERY FISHY NOT TO MENTION SO VERY PECULIAR!

UPDATE: It appears Vatican Radio has removed its original story on Pope Benedict's praise of Pope Francis from its webpage. Interesting, no?

I was the first in blogdom to state that the endorsement of Pope Benedict of the current papacy struck me as fishy. And fishy it is. It is also fake news!

Another Vatican scandal as reported by the Associated Press: 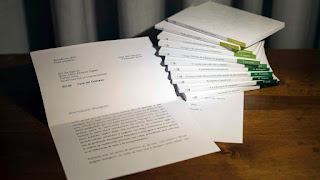 The Vatican's communications office released the photo of the letter on Monday on the eve of Francis' five-year anniversary. The letter was cited by Monsignor Dario Vigano, chief of communications, to rebut critics of Francis who question his theological and philosophical heft and say he represents a rupture from Benedict's doctrine-minded papacy.

In the part of the letter that is legible in the photo, Benedict praised a new volume of books on the theology of Francis as evidence of the "foolish prejudice" of his critics. The book project, Benedict wrote, "helps to see the interior continuity between the two pontificates, with all the differences in style and temperament."

The Vatican admitted to The Associated Press on Wednesday that it blurred the two final lines of the first page where Benedict begins to explain that he didn't actually read the books in question. He wrote that he cannot contribute a theological assessment of Francis as requested by Vigano because he has other projects to do.

A Vatican spokesman, speaking on condition of anonymity, didn't explain why the Holy See blurred the lines other than to say it never intended for the full letter to be released. In fact, the entire second page of the letter is covered in the photo by a stack of books, with just Benedict's tiny signature showing, to prove its authenticity.

The missing content significantly altered the meaning of the quotes the Vatican chose to highlight, which were widely picked up by the media. Those quotes suggested that Benedict had read the volume, agreed with it and given it his full endorsement and assessment. The doctoring of the photo is significant because news media rely on Vatican photographers for images of the pope at events that are otherwise closed to independent media.
Posted by Fr. Allan J. McDonald at Wednesday, March 14, 2018

I didn't know that Mark Thomas was working undercover in Rome for his hero!

The photograph is obviously a PR shot. I suspect it was always intended to be photo-illustration and not photo-journalism. It’s a photograph to illustrate a press release and nothing more. The people complaining are simply looking for any reason to complain. There disgruntled people, not investigative reporters.

With all the commotion about not being able to read that letter in that photograph , why didn't anyone provide a link to where one might purchase the books? I wonder, can they be read on an e-reader? One would think someone would encourage people to read the books !

TJM said..."I didn't know that Mark Thomas was working undercover in Rome for his hero!"

Who is my hero?

Also, what good can we expect to come from your comment in question?

Lighten up. When you find the texts and rubrics in the Mass Pius XII changed, please let me know. Funny I was attending Mass then and can't think of a one