NEW PROFESSIONAL PHOTO OF OUR BEAUTIFUL WANT-TO-BE BASILICA WITH ALTAR RAILING, JUST LIKE ICING ON THE CAKE!

This photo was taken on Monday and is the best professional photo yet. It is now the photo at the top of my blog.

The photographer is Mark Zbinden. The others I have posted have been from my little ole iPhone. Please note the color and clarity of the windows. Only a professional photographer can get that right with the interior darkness and the exterior light flooding through the windows and often causing them to look washed out in photos. Simply Magnificent! 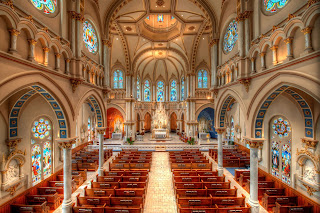 It's time to take away the table.

without the most ancient form of the altar, free standing, as in all the major basilicas, we would not qualify to become a minor basilica. Attached altars are a later modern novelty.

By the way, even the 1962 Roman Missal has two forms of incensing an altar, one for the attached altar and the other for the free standing altar that allows for the priest to circle the altar as he incenses it.

I agree with Fr McDonald. There can be no objections to free-standing altars provided they are fixed, of suitable materials, and allow celebration in either orientation. What was objectionable was the post-1964 imposition of wooden tables in front of existing altars ostensibly to enable versus populum celebration but giving the impression (deliberately in some quarters) that we had embraced the 16th century Protestant idea of the Communion table which even Anglicans had by then effectively abandoned.

Less objectionable but also deplorable is the Continental practice of the forward cuboid altar which might be ideal for pagan sacrifice but not for the Holy Sacrifice of the Mass. Its main aim seems to be to make it impossible to celebrate anything but the Novus Ordo.

Never mind - sanity will prevail, even if it takes a couple of centuries to do so.

Hoods of jeeps are "suitable," but not cuboid altars.... Hmmmmmm

Amazing what one can do with Photoshop....

Anonymous, you are a complete prat. No-one would suggest driving a jeep into a church so that one could celebrate Mass thereon. Stop trying to be clever - you need a brain to do that ... Hmmmmm

Doesn't look like a photograph...more like a rather garish painting....done with too many primary colors. You didn't pay somebody to do it, I hope.

Of course this is a matter of taste and what is one person's delight in colors is another's garish nightmare. However, in the classical sense, and it was researched by the consultant that our contractor, a life long member here, acquired was that this church building is a part of the French neo-Gothic/Romanesque revival of the 1800's in the USA. Our Cathedral in Savannah is the same and thus the colors are the colors of that revival and are historic. I like it as does the world who visits here yearly!

The pews are really darker. They aren't really that color.

The colors in the photo are considerably different from the actual colors. In the pic your pews are honey-brown while in actuality they are dark walnut. The photo has been substantially "enhanced."

Regarding your preference for a freestanding altar, what if we throw this bone into the discussion, Father? :)

"The more recent liturgical rites likewise deserve reverence and respect. They, too, owe their inspiration to the Holy Spirit, who assists the Church in every age even to the consummation of the world. They are equally the resources used by the majestic Spouse of Jesus Christ to promote and procure the sanctity of man. ... But it is neither wise nor laudable to reduce everything to antiquity by every possible device. Thus, to cite some instances, one would be straying from the straight path were he to wish the altar restored to its primitive table form..."
—Pope Pius XII, Mediator Dei, 1947

What is a cubold altar?

Up here in the Atlanta Archdiocese, I've noticed a variety of altars. At the Basilica of the Sacred Heart in downtown, they have a wooden altar (not table, but an altar) in front of the historic marble back altar. At Atlanta' Cathedral of Christ the King, a free-standing "see-through" altar, perhaps made of iron, which replaced the old free-standing wooden one that is now used for overflow Masses in the adjoining parish hall. St. Judes, in Sandy Springs, has a simple, tasteful wooden table for an altar with two candles, in a church created in the early 1960s made of rock. The Episcopalians up here have copied the Catholics and use free-standing altars for their Eucharists, though the older ones still retain the marble back altars at least for aesthetics.

Wish we had St. John the Baptist (Cathedral) relocated up here---much bigger than Atlanta's diocesan cathedral and more majestic---but I don't suppose I would get any takers on that in the state's mother diocese!!!!

A "cuboid" altar is one that John Nolan doesn't like.

'Cuboid' refers to shape. Check out Notre Dame de Paris, St Germain-des-Prés, and Chartres cathedral. They are usually plonked on a platform at the crossing and totally disrupt the sight-lines. Surround them with a gaggle of concelebrants in plain white polyester ponchos (sorry, chasubles) and you immediately think of druids. Two years ago I attended Vespers at ND de P and they had a brazier in front of the cube burning incense. Fr K will no doubt applaud this neo-paganism as 'ressourcement'. Reason no. 758 for preferring the classic Roman Rite.

This is the great weakness of your "cuboid" argument. You don't care for the design, so you opt to trash it, bad-mouth it, attempt to make those who don't share your preferences "Philistines."

Worse, you accuse those who do not share your preferences of being g pagan-like. Total for, and only a total prat would imagine e that everyone e has to 1) share his preferences or 2) agree with him. A prat or a certain flavor traditionalist...

No, no…a pagan is one who refuses to answer a direct question regarding whether he believes in the Real Presence or in the literal, bodily resurrection of Jesus of Nazareth from the dead…as Kavanaugh did when so asked by a blogger here. Kavanaugh said the question was a "trap." LOL!

Gensenist - I have answered those questions repeatedly. "I believe all that the Catholic Church teaches to be revealed by God.". Now, what's your next question.

It wasn't my question, remember? Although, you keep trying to say it was….more prevarication. And, you did not answer the direct question when it was asked. Anybody can parrot tongue-in-cheek, rote statements. The Pope does it all the time.