The natural wooden pedestals that the two angels holding the candles sit upon were recently crafted by or parishioner Mr. Jim Fontenot. He also crafted two larger pedestals for the two oldest statues we have of our Blessed Mother and Saint Joseph which predate this church building. Saint Joseph is the colored statue to the far left of the church in the masthead photo above. 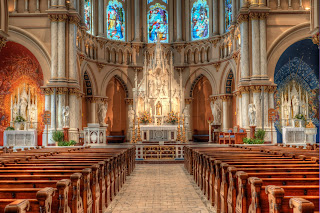 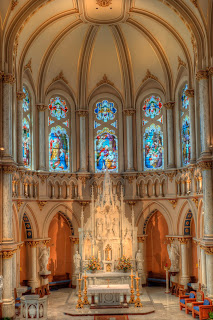 And now for Bishop  Thomas J. Tobin, Bishop of Providence, insulting letter (or it may have been a homily, I don't know) and I use insulting in a pejorative way or tongue in cheek.  What Bishop Tobin highlights is what is the experience of most Ordinary Form Masses on any given Sunday in Anywhere, USA!

The crisis of the lack of respect for the Sacred Mysteries not only from laity but also clergy is so disastrous that one wonders why there isn't more concern about this shown by bishops, clergy and laity everywhere. What does it take for these groups of Catholics to see the elephant in the room and that the root of the loss of Catholic identity begins with the slovenly celebration of the Ordinary Form of the Mass?

“Now that little blurb contains some very useful reminders,” I said to myself. It addresses a recurring problem in some our churches these days – an habitual lack of reverence for the sacred mysteries taking place in our midst, especially when the Holy Sacrifice of the Mass is being offered.

While all of the points in the bulletin article have merit and should be observed, the reminder to “dress proudly enough not to offend,” might be the most relevant, especially now as we enter the hot and humid, casual days of summer. The sloppy and even offensive way people dress while attending Mass is something I’ve witnessed personally and regularly receive complaints about.

You know what I’m talking about; you’ve seen it too. Hirsute flabmeisters spreading out in the pew, wearing wrinkled, very-short shorts and garish, unbuttoned shirts; mature women with skimpy clothes that reveal way too much, slogging up the aisle accompanied by the flap-flap-flap of their flip-flops; hyperactive gum-chewing kids with messy hair and dirty hands, checking their iPhones and annoying everyone within earshot or eyesight.

These displays reveal a gross misunderstanding of the sacred space we’ve entered in the church and the truly sacred drama taking place in our midst. C’mon – even in the summer, a church is a church, not a beach or a pool deck.

Every member of the worshipping community should dress appropriately for Mass, but the obligation is even greater for those who fulfill public ministries during the liturgy – ushers, lectors, servers, and Extraordinary Ministers of Holy Communion. Because they’ve assumed a public role in the sacred liturgy and are in the public eye, it’s important that they give good example to others in the way they dress, speak and present themselves during Mass.

And what about the trend I’ve seen increasingly in recent years, even in our cathedral, of people coming to Mass carrying their water bottles and coffee mugs? Do they really need to be hydrated or caffeinated during that hour they’re in church? Is it a sacred space or an airport terminal? And I wonder how many people even think about the Eucharistic fast (one hour before receiving Holy Communion) when they prepare for Mass? I’m old enough to remember when you couldn’t have any food or beverage, except water, from midnight before receiving Holy Communion. It was a sacrifice, to be sure, but also a clear reminder of how special it was to receive Holy Communion.

And while I’m venting, I still find it inappropriate and disrespectful to have a church full of people talking and creating a boisterous atmosphere before Mass, completely ignorant of the presence of the Blessed Sacrament and the spiritual needs of their fellow parishioners who wish to spend a few moments of quiet prayer with the Lord. The Church should always provide a sanctuary of quiet, peace and prayer for anyone who wants to escape the barrage of noise and technological intrusions of our daily routine and enter into the presence of the Living God.

I am frequently amazed, however, over how many of the faithful, young and old, simply don’t know how to receive Holy Communion properly. This ignorance reached its pinnacle a couple of years ago when one lady, a Confirmation sponsor in fact, dropped the sacred host I had placed in her hand and then looked at me, giggling, saying, “I guess I’ll need another one of those,” like she had just lost her favorite snack cracker.

It’s easy folks, really. As you approach the minister of Holy Communion you bow reverently and when you hear the words, “the Body of Christ,” you simply respond “Amen” as you extend both hands carefully or put out your tongue. And note, you’re required to consume the host then and there and not take it with you down the aisle or back to your pew.

The title of this column was taken from a letter of St. Francis of Assisi to his friars, in which he reveals his profound respect for the Holy Eucharist. He writes: “Let the entire man be seized with fear; let the whole world tremble; let heaven exult when Christ, the Son of the Living God, is on the altar in the hands of the priest. O humble sublimity! O sublime humility! That the Lord of the universe, God and Son of God, so humbles himself that for our salvation he hides himself under a morsel of bread.”

Would that we might display even a fraction of that reverence when we go to church, attend Mass and receive the Holy Eucharist, the Body and Blood of Christ!

Many of us have been pointing this out for years. Hey, we live in a slob culture and the Church is doing nothing to educate the laity about appropriate behavior and dress.

Father the church looks beautiful. However the seats for the priest and servers, although nice, do not fit with the interior. They stick out and not in a good way. Something from the time period of the church would work better.

I like the way Pius XI put it in 1928: "...among the faithful there is a greatly increasing carelessness of ecclesiastical discipline, and of those ancient institutions on which all Christian life rests, by which domestic society is governed, and the sanctity of marriage is safeguarded; the education of children is altogether neglected, or else it is depraved by too indulgent blandishments, and the Church is even robbed of the power of giving the young a Christian education; there is a sad forgetfulness of Christian modesty especially in the life and the dress of women..."

I agree about the chairs, however, the big, big problem is that these were designed by the liturgical consultant that assisted in the restoration of the Church and on paper looked different than in reality. These were also given by a parishioner in memory of a loved one and these chairs aren't cheap and I won't scandalize you by telling you how much these cost 10 years ago. I was not please with them from day one, especially their size and these are heavy and difficult to move when needed.

But they are confortable and have grown on me.

Priests don't need a comfortable chair since they should be standing at the altar.

Father, if you want a comfy chair, become a bishop. Then you can even sit for you sermons!

I sit at my solemn sung Masses with deacon and subdeacon, though, must comfi.

Are you familiar with the Roman Mass in its Extraordinary Form? The celebrant sits during the Gloria and Credo, after he recites these but while the schola sings them.

When my second oldest daughter received her first Holy Communion, she was not prepared for how thick the Host would be. We were at a church in a different diocese where they use thick, heavy Hosts, and her mouth was dry and she began to gag on the Host. After that, she had a fear of going to Communion that I feared would never go away. So, for the next year or so, every time I took her to Mass, I brought a small water bottle so she could drink it right after Communion to make sure she got the Host down. I didn't need hydration--I was just trying to stop a problem before it became a bigger problem.

Dialogue, I was joking (or attempting to, anyway) with Fr. McDonald about his need for a "cathedra" -- and apparently a comfy one -- something about which he has joked rather often.

I should've used a smiley face to indicate that I wasn't trying to start an argument about priestly standing in the Roman Rite. I forgot that the Internet's default mode is argument and polemics. Sorry about that.

I'm afraid I object both to typographical "smiley faces" and to the use of the word "comfy", for reasons unknown even to me. But I was never what could be called "hip and happening", "down with it" or a "cool cat".

Dialogue, I am not apt to use the word "comfy" in real life in any manner other than the sarcastic.

And I never smile in reality.

We Lefebvrites aren't a jolly bunch like the jansenists are.

You seem cool enough to me, and we have met in real life. So I speak with some authority.

With all this talk about comfy chairs we should expect the unexpected.

I agree with most of the article except about the water bottles. I bring mine in with me so it doesn't boil in the car during mass!

Carol, Buy a cooler down to the Wal Mart.

Lefebvrian, I have personally seen you smile, but it was only at some sardonic comment or dark humor.

I think some people are testing to see what they can get away with. If no one says anything, they will keep testing. However, I don't think neighbor in the pew would ever say anything, but they may be thinking something. That could be the ushers job. It would be interesting to do anonymous polls to ask people's opinion, then reveal those opinions so people can be heard. I think Survey Monkey does something like this.