A SIGN OF THE TIMES, CHURCH'S DEMISE AND THE RICH RISE FROM ITS RUINS: SECULAR DECADENCE AND CATHOLIC CAPITULATION 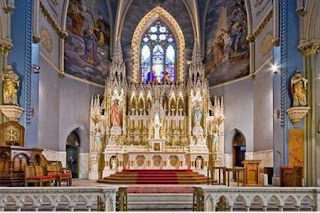 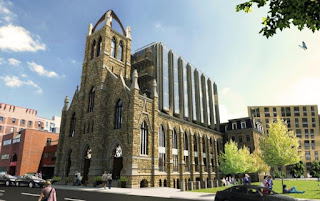 From the Boston Globe:

Three years ago, Cardinal Sean O’Malley designated the Holy Trinity Church in the South End of Boston for secular purposes — in official Church language, “for profane but not sordid use.”

That decree triggered a $7 million sale of the building to developers and a plan — just approved by the city — to turn it into luxury condos. The design features a glass-and-steel structure rising from the base of puddingstone and granite that was created by 19th-century architect Patrick Keely. Aesthetics aside — if you can put them there — this project dramatically showcases a new and changing Boston, where nothing is sacred.

A church that served as base of operations for a day program for homeless adults and at-risk youth will now be marketed as housing for the wealthy.

The $47 million project at 136 Shawmut Ave., developed by New Boston Ventures, will include 33 condos and a basement garage for 28 cars. Because no zoning variances were necessary, there are no requirements for affordable units, according to Nicholas Martin, a spokesman for the Boston Redevelopment Authority.

In a city once known for reverence to historic detail and raucous battles over projects that challenged it, the transition to “eye-popping” happened quietly. Limited dissent came from a small group of parishioners who tried to fight the May 2004 closure decision by the Archdiocese of Boston. The inevitable was delayed until 2008, mostly because of the need to find new locations for the Cardinal Medeiros Center for the homeless and the Bridge Over Troubled Waters program for at-risk youth.

Christine M. Quagan, who was part of a Committee to Preserve Holy Trinity Parish, described the church closure as “a stab in the heart.” According to Quagan, she was the only person who spoke out against the condo plan at a BRA meeting on the grounds that it was too great a contrast to tradition and history at that site. Holy Trinity, she said, represented a time “when the church was proud of its long service to the poor.”

The condos will bring property tax money into city coffers, acknowleged Quagan. But at the same time, she said, “they kind of ripped the soul out of the city of Boston.”

Holy Trinity was established in 1844 to serve German immigrants. It was closed because of low Mass attendance and millions in estimated capital needs, according to Terrence Donilon, a spokesman for the archdiocese.

At the time of its closing, it offered the only approved Latin Mass in the Boston Archdiocese. A Latin Mass is now held at the Cathedral of the Holy Cross. Mindful of a South End community that still includes immigrants, the poor, and the homeless, Donilon said that Catholic Charities operates a food pantry from the cathedral, and medical care is also provided regularly to the needy. Money from Holy Trinity’s sale goes to the cathedral’s overall mission, he noted.

Holy Trinity’s baptismal font, along with statues and vestments, has been relocated to the cathedral. Its bells and railings are on their way there, too. The altars were moved to St. Joseph Cathedral in Manchester, N.H. So the physical church lives on, if only in pieces.

What the development future holds for Holy Trinity says a lot about the current state of Boston. There’s no apology for this in-your-face melding of old and new, no old Boston handwringing over the crassness of a glass palace for the rich rising out of a church that served the poor.

This is what today’s progress looks like. Profane, but not sordid, and blessed by the Archdiocese of Boston
Posted by Fr. Allan J. McDonald at Wednesday, June 17, 2015

Well the Church herself succeeded in doing what the Caesars, Napolean, Stalin, Hitler, the Black Death, communist China, the French Revolution, the Enlightenment etc. couldn't do. Sinful, weak, spineless shepherds have allowed 2000 years of Faith and Tradition to be thrown in the gutter........with glee. The shepherds not only didn't protect the sheep from the wolves they lead them right into their midst. In this life it's clear modernism always wins. And the culmination of this complete and total wreck is the prize, you have won the papacy. We live in a church where shameless, blatantly inadequate men like Dolan and Francis and Kasper are raised up and men like Burke and Morlino, Cordelione are insulted, derided and publicly humiliated. But they treated Our Lord the same way. In the end the Cross triumphs but this present Calvary is almost too much to bear. But Our Lady will help us and she always wins.

It had been the happy home of a traditional Latin Mass community.

What's an "approved" Latin Mass? Mass in the Extraordinary Form needs no approval. Only an OF Mass in Latin could require approval.

You all should check out the recent post over at Rorate. The one about Cardinal Caffara and Sister Lucia of Fatima. I think it's pretty telling about the current situation in the Church, and maybe a sign of hope?