A photo to drive some in the Church to crazed distraction: 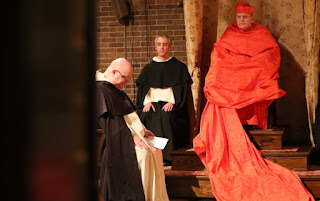 
Out with strums and drums, in with bells and smells:

Amidst what they see as the degradation of US culture, a vocal and especially young segment of the Catholic Church believes a return to traditional worship holds the answer (You can access the entire article by clicking HERE.)

For the purposes of my commentary, though, I want to focus on the following that I quote from the article above:

"Liturgical battles in the Catholic Church have been roaring for decades.

Those who prefer the old style believe modern worship focuses too much on the congregation or the priest, what they call “horizontal worship,” and not enough on Christ, or “vertical worship.”

Fans of the Vatican II style, however, say worship should include the full people of God, and see in the Extraordinary Form a return to the clericalism — emphasizing the supremacy of priests and bishops over the laity — that Vatican II sought to eliminate.

Both camps can be equally strident in its insistence that God is on their side."

My Comments:  It is a known fact that many priests formed in the pre-Vatican II seminary and model of priesthood decried by "fans" of the Vatican II style of the Mass, loss their priestly identity and thus their vocation to the priesthood in the aftermath of Vatican II many of them leaving to marry and many of them who left the Church altogether. There are several former priests (not all) in Macon who fall into this category.

Clericalism is when a cleric does his own thing, which is so, so common at the Ordinary Form of the Mass. This clericalist thinks he is the final authority in the liturgy and thus does not follow the ultimate authority of the Magisterium or of the rubrics of the Mass, since he thinks he knows better.  The clericalism of this type of priest stems from the sad mentality that he can and should get away with whatever he wants to do.

When a priest in the EF Mass follows the rubrics of the Mass and scrupulously so, this is not clericalism as he is simply being obedient to what is required of him. He hasn't substituted his own clericalism over even style for the legitimate authority of the Church over the liturgy.

What the "spirit of Vatican II" corrupt catholics  sought to do with the liturgy was to eliminate the categories of clergy and laity and they worked hard to do it with how the Mass is celebrated in rank and file parishes and radically so in some parts of Europe, Holland being a sad example.

This has led to a loss of identity of both of the clergy and the laity in so many parts of the Catholic Church and thus one big chunk of the reason for the decline and fall of Catholicism in so many parts of Europe, Ireland being the recent most stunningly noteworthy, but also in other sporadic places.

Continuing the military analogy, the liturgy "wars" or "battles" are really nothing more than disputes among an army's strategists. The reality is that the lay faithful of the Latin Church are almost universally ambivalent about everything liturgical other than keeping Sunday Mass to an hour or less in length. When disputes do arise, the argument is not about which manner of celebrating the OF--or which form of the Roman Rite--God prefers, but which of these options best facilitates congregational participation.

Is not the term clericalisation normally used to mean not clergy doing their own thing, but an excessive emphasis on the clerical state almost as something apart from the rest of the Church? In this sense rediscovering the general priesthood of the laity as baptised persons could be a good thing, acting as a necessary corrective to the false sense of clericalisation and enabling us to reconnect with the true role of Christian priesthood, which is not to offer sacrifice as a pagan or Judaic priest does, but to preside at the offering by the whole Church of the one sacrifice of Christ in which all share.
I feel only bemused at the sight of clerics today decking themselves out in the archaic splendour of the cappa magna, lace nightshirts and all that ridiculous paraphernalia. This obsolete triumphalism is a prime example of clericalisation gone badly awry.

I do not think it is a matter of style or of having God on either side. It is in trying to get on the side of God who should be approached respectfully and with a certain degree of loss of self. This, Savonarola, is the use of Clericalism typical to this blog and seems to fit into the one you offer. I am ambivalent about the garb of the priest as long as it is an attempt at respectful approach to God and not a play to the sensibilities of the congregation or his peers. I am only off put by a priest who dresses down to the occasion signaling less than respect for God and a stereotype of the congregation.

A priest can offer the Mass even without participation of the laity, while the laity, even when gathered in large numbers, cannot participate in the Mass without a priest. The priest, then, is more than just the president of an assemblage of sacrificial Christians. Only when a priest is present is the sacramental person of "Christ the Head" present, so that the priest acts "in persona Christi capitis".

Clericalism refers, at least historically, to the Nineteenth and early Twentieth century fear of bishops over-extending their ministry into secular affairs, the rightful domain of the laity.

Savonarola, I would be interested to know what doctrines and dogma you consider "ridiculous paraphernalia" or "obsolete triumphalism." Now, I have the strangest urge to go and fire up my grill for BBQ...

Good point. Some of the laity forget or overlook that since the priest, because of his office, serves a wholly different function, and that the ministry he exercises occupies a different domain of spiritual reality, that in this regard he is separate to them in how they are allowed to function in the Church. I know there are some who unfortunately would say this is clericalism, and these (to me) have a wrongful perspective.I don't think that some of the things that happened during the priest abuse scandals can be attributed solely, or even all that much to
clercalism. There are differences of opinion on what constitutes clericalism;so there are those for instance, for whom a priest or bishop,speaking out against same-sex marriage or abortion, is guilty of clericalism. There are those to me who use the term as a cudgel to force their own agenda.

"Fans of the Vatican II style"

Nice little sleight of hand there.

Vatican II didn't call for the stuff that so many people do in its name.

Jolly...Savon didn't say a thing about doctrines and dogma...only commented about "paraphernalia"...."decking themselves out"...cappa magna..."lace nightshirts". Get out your Webster's and look up "paraphernalia". You'll not find it defined as doctrine or dogma.

The purpose of VCII is to propose to the Modern world the truths defined at Trent. The VCII style is evangelization.

The problem with proposing truth to the "modern world" is that, by definition, each new moment presents a new "modernity." The end result of accepting the error that man is always "progressing" is the necessary correlation that man cannot be connected to something objectively true that does not change correspondingly over time.

Anonymous, I am well aware of that…but, I was just curious. Usually, those who complain about such things are also cafeteria Catholics…unbelief often hides under such rhetoric.

Clericalism is strictly speaking the undue influence of the clergy in the secular sphere. Think of Southern Ireland in the 1950s and present-day Iran. It shouldn't be used in a purely ecclesiastical context and, as George points out, it is an epithet used by one side to cudgel the other. Like most of the other '-isms' (racism, sexism, ageism, speciesism, the list goes on and on) it's an expression best avoided by anyone with a brain.

Unlike Savonarola, the sight of ceremonial dress on ceremonial occasions does not bemuse me, whether it be a prelate in full pontificals, a High Court judge in robes and wig, a general in scarlet and cocked hat, a university Vice-Chancellor in full academic dress, or for that matter Barack Obama in white tie and tails. Men's formal attire is archaic in that it has changed little in a century and a half, for the simple reason that it is not everyday wear.

I would have been somewhat bemused, however, had Cardinal Burke turned up at the Oxford Oratory wearing a boiler suit.

Everyone go on youtube.com & listen to "concilliar or catholic" Fr.Gommar DePauw 1967".If you are the least bit catholic this lecture is mandatory!!!!

When I read V2 documents I always get a sense of how almost cock-sure the council fathers were of the solidity of the Church, of how one negotiates with erstwhile hostiles (the world) from a position of strength and so can afford a bit of tactical retreat in some areas (inasmuch as one enjoys strategic depth) so as to make further strategic gains..... only no sooner was the council over, the world proved far more adept at penetrating, infiltrating and undermining the Church top to bottom than the Church proved capable of actually changing the world.

When was the last time you heard a priest (or bishop) seriously chart out a plan for actually converting the hostile non-Catholic world? We are always on defense. What's our plan to overturn Roe vs. Wade or even more radically, overthrowing the sexual revolution?

Some friends and frenemies call me 'conservative'. Hell, I want to overthrow the sexual revolution. If that's not radically, audaciously revolutionary then what could the words mean? Unless we are about the Kingdom of God, we're just re-arranging deck chairs.

The point must always be keeping in mind the means and the end. The end is that all men come to know, love, and serve Jesus the King..... the means are liturgy, choir, homily, catechism, parish ministries within the parish community and parish ministries that re-activate fallen away or lukewarm Catholics...and ministries directed at non-Catholics (by name or category).

What's the plan for converting the top 1% of Macon society? Have you one? Who are the 1% of Macon society (start there and start a dossier on each family, each individual if only to pray for them). If you don't have a plan.... you won't know the means from the end.

What's the plan to actually set the stage to drive towards a massive conversion of the Baptists? No one has one? How about again first actually get to know who's who and the trend lines....

In short, we, the laity were called to evangelize the world and then immediately set about to de-construct ourselves and bicker over who gets to play priest( or priestess) and who gets to focus on social work in the absence of raising up the next generation as Catholic leaders.

If our clergy won't see the big picture then we the laity will fill in the blanks.

The other side has a plan and they're working it and they're just laity.... there's nothing magical about it, except that you sit down and chart out the vision and then the logical steps to take and then take them.

Jus, Re: massive conversion of the Baptists…tell them that the Catholic Church has discovered the secret truth that Jesus actually served fried-chicken to the five thousand and appeal to Rome to beatify Billy Graham. That should do it...