IT DOESN'T TAKE LONG FOR EVERYTHING TO CHANGE

Evans, Georgia is a suburb of Augusta, Georgia. In January a five star retirement community opened for those 55 and older. It took years of planning and building. 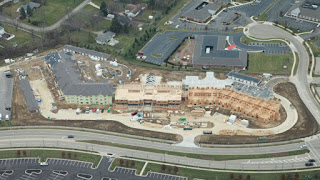 Here are some shots of portions of the completed project just opened in January:

And here is what it looked like yesterday (Tuesday) morning!

The apartments are one, two or three bedrooms. 85 residents had moved in. All but two where evacuated before the fire was completely out of control destroying the entire building!

One 91 year old resident died in the fire.

Another was found 8 hours after the fire began hunkering down in her bathroom and apart from some smoke inhalation was doing fine. Her daughter presumed she had died in the fire and had begun to make funeral arrangements!

You just never know how life will change in an instant.
Posted by Fr. Allan J. McDonald at Wednesday, June 03, 2015

Man, where was the sprinkler system?

Wow! Horrific and frightening. And the roof system -I can hear the developers now: It seemed like a good idea at the time.

And re: the woman who began arranging her mom's funeral just 8 hours later without even a confirmation her mom was dead. Well, maybe that's normal for some people, but if I were the mom, I'd be reviewing the will. :-)

It was unfortunate that there was even one fatality, but thanks be to God there was only that one. The lady that was found in her bathroom was extremely fortunate.

I'd be interested in what they discover was the cause. Sounds like some pretty poor planning and construction.