It sounds like Pope Francis is reigning in his arrogant cabal! It appears to be a course correction! 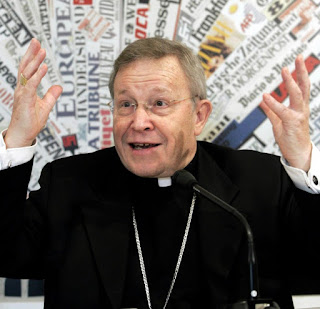 
Cardinal Walter Kasper has admitted that Pope Francis never endorsed his proposal to allow divorced and remarried Catholics to receive Communion.
The German cardinal, who offered his proposal in February 2014 at a meeting of the College of Cardinals, said that the Pope had invited him to speak, but it was a “misunderstanding” to think that the Holy Father had given his approval to the proposal.
In an interview with Raymond Arroyo of ETWN, Cardinal Kasper denied having said that the Pope backed his proposal. “Well, this I did not say,” he said. When Arroyo quoted Cardinal Kasper’s claim of papal approval (“Clearly, this is what he wants”), the cardinal answered: “No… he did not approve my proposal.”
Cardinal Kasper went on to explain that Pope Francis wanted the question raised, and wanted discussion of the idea, but “I wouldn’t say he approved the proposal; no, no, no.”
Last October, in an interview with Catholic News Service, Cardinal Kasper had clearly implied papal approval for his plan, but said that the Pope would not take action without the approval of the Synod of Bishops. “I have the impression the Pope is ready to reaffirm such a thing, but now it depends also on the voices of the bishops in the Synod,” he said.
In his interview with Arroyo, Cardinal Kasper stressed that he was presenting a question for debate at the Synod of Bishops, not making a plea for change. “It’s not a proposal,” he said.

I thought Raymond Arroyo did a masterful job of drawing out the Cardinal's errors. As for the Cardinal, anything I would say would be uncharitable so I will be good and not say it.

This is not the first time the Cardinal has been found stating a baldfaced, uh, contradiction. Remember how he tried to give Edward Pentin the shaft at the last Synod by stating a defamatory falsehood, when the latter fortunately had the tape to clear his slandered name.

I'll say it, it's damage control, the damage has already been done.

How in god's name did that man become a priest let alone a cardinal? Kasper said that he will accept the decision of the pope and the synod re. Communion for divorced Catholics. What's to accept? The teaching of the Church is clear, settled and definitive......someone in objective mortal sin cannot receive communion without first receiving sacramental confession and absolution. And he put forth his "question" to the synod back in 1994 and SAINT John Paul II said NO. The cardinal didn't accept that dedision of that pope. And this nonsence that we can't call a spade a spade because it is uncharitable is nuts and is a modernist tool to stop debate. Christ called Herod "that fox". And the cardinal didn't mind being uncharitable to Cardinal Burke and those cardinls who wrote that book upholding the teaching of tye Church, who it should be stated are under no obligation whatsoever to get his approval or discuss with him in any way their plans to uphold the teaching of the Church. And the cardinal didn't have a problem stating out right that Cardinal Sarah was wrong in his opinion on the Kasper proposal.......did he discuss that with Cardinal Sarah, it sounded polemical, which he accussed other orthodox cardinals who disagreed with him, as being. The cardinal didn't even have the courage to accept the responsibility for the scandal he has created. What did Chriat say about those in authority who lead even one astray........how big is that mill stone going to be around his neck if he doesn't repent. And the pope share some responsibility on this matter for letting this confusion last for so long and remain silent. That interview was eye opening as to what we are dealing with. It is obvious that our hope is in Christ and his cross because it is just as obvious that many of the shepherds are really wolves in sheeps clothing.

He really needs to stop giving interviews and instead spend time in therapy to overcome his Afrophobia.

It is remarkable that a Prince of the Church should appear to be be so ignorant about basic doctrines of the Church.

The Council of Trent taught that if you have committed a mortal sin, you must go to confession before you can receive Holy Communion again.

“Those whose conscience is burdened with mortal sin, no matter how contrite they may think they are, first must necessarily make a sacramental confession…If anyone presumes to teach, or preach, or obstinately maintain, or defend in public disputation the opposite of this, he shall by the very fact be excommunicated.”

Yes - you read that right:

"If anyone presumes to teach, or preach, or obstinately maintain, or defend in public disputation the opposite of this, he shall by the very fact be excommunicated."