THE BOMBARDMENT OF LIVORNO, ITALIA IN 1943 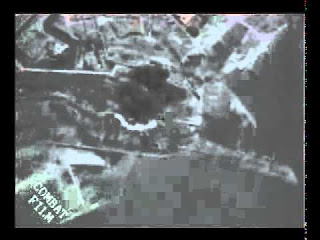 This could very well be my mother, no proof of it, just found it on the internet! If this isn't her, I'm sure it could have very well been what she would have done in the face of such death and destruction! 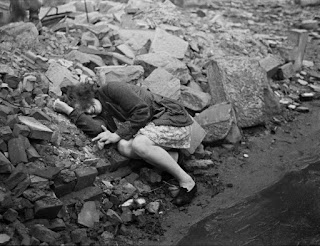 I have discovered on the internet and purely by chance, almost as though I was directed to find it, a treasure trove of films and commentary on the bombardment of Livorno, Italy (Leghorn in English).

As I mentioned on another post where I showed Winston Churchill touring the war damaged city and at a time that my father was certainly nearby and my mother as well, my mother would have been about 21 years old when the war came to her city and her city was carpet bombed. Livorno was the most heavily bombed city in Italy during the war which began around 1941 and lasted until 1944. 1943 was particularly devastating. 500 civilians were killed and 600 injured and many were displaced including my mother and her family.

At the beginning of the video below, actual film footage taken from the bomb compartment of an American bomber with bombs filmed being dropped and the devastation below with explosions. I would wager a bet that it was at this particular bombing that my mother's apartment building (where she still lived with her parents and several siblings) took a direct hit causing the building to implode into its basement where the residents of the building had taken refuge during the air raid killing them all. My mother and her family were elsewhere at the time and escaped certain death. Everything they had was gone in an instant!

My mother talked a great deal about her war experiences and that her city was destroyed but I never really comprehended what she was saying to me until now. She also spoke of the air raid sirens and the fear these struck in their hearts. My first cousin who now lives in Chicago and is my mother's niece was a very young child during the war and was with my mother and her mother during the war years as her father had died of TB. She would hear the planes approaching Livorno prior to the air raids sounding and would start crying in agitation.

This video has some of the most dramatic images of the destruction of Livorno in the bombing aftermath and the sound track is appropriate and the sounds of air raid sirens and explosions is exactly what my mother experienced. She told me and now I know what she went through in a way I never knew before.

The last scene in the video is my father and the USA liberating Livorno. It is dramatic too!

Livorno - is that Leghorn by any chance? The English language in common with most others has exonyms, and so we refer to Rome, Florence, Turin, Naples and so on. Italians call London 'Londra' and Munich 'Monaco'. No English speaker pronounces Paris as the French do, so even if the spelling coincides, it's still an exonym. Mockba is still Moscow, as far as I am aware.

The video clip linked on my computer seems to be different – a movie in German with lots of church-related scenes and no bombs. But I don’t need to see the video; I have seen many such film clips and also grew up hearing much about the devastation and horror caused by Allied carpet bombing (aka terror bombing). My German mother’s (and her family’s) experiences during the Second World War have been a major factor in forming my strong views about the insanity and evils of war, and violence more generally. As the saying goes, “we are all creatures of our experience” – even when that experience is only vicarious.

A 2 that is weird. This morning when I first posted this I post the German movie one first by accident, but then changed it immediately after I reviewed the post. Is you computer stuck in this morning?

My cell phone is 11 years old so, yes, I imagine my computer was stuck in this morning.

I believe carpet bombing was introduced by the German Nazi Condor Legion in the Spanish Civil War against the Republicans. So Italy can blame the fascists, again, for instigating the horrors -- which the Italians so dutifully imitated under Mussolini's 10th Army in Egypt, Libya, and Morocco (1940-1943). And what the Italians did in Ethiopia, I dare not describe. Were the most-victimized victims of the Fascists the Fascists? The Auzies call it the boomerang affect; it certainly was effective! 4 million Germans dead; >100,000 Italians dead in Sicily alone. Wait a sec! What were the Italians doing in the 1st Italo-Ethiopian War (1895-1896), let alone the 2nd! Vacationing? And the 2nd Italo-Ethiopian War, protecting the Italo-etiopi? Ah well, it's always somebody else's fault, isn't it? When the bombs start falling, our minds tend to go forget the past; we shut our eyes, block our ears, and concentrate on the present -- and wonder if there's going to be any future. As Adm. Dick Boner once put it, "Our enemies aren't innocent just because they get killed." The dead don't cry.

My mother was there too. I am Danish but she lived with her family in Livorno at the time, Danish parents. She was six years old. The first day they fled into the mountains. The next day they slept in a bunker and in the morning they went to Garfagnana (countryside) and stayed for two years. I also stepped over this video and couldn't help getting angry at those planes. Why hit the civilians, why crush the city like that. The wanted to hit the harbor and the ships, but they didn't need to kill so many. It's a strange anger, because the defeated the Germans and that was good. But this video....I think of my mother...down there in the city, the bombs falling, a little girl...

WOW! Thanks for that. My mother would have been in her 20's at the time. They happened to be out or away from their apartment at the time of the bombing, in fact, she and her family had good friends south of Livorno in Ardenza which would not have been bombed, so I suspect they may have been there. The residents of her apartment building, which I think is what we see being hit had taken refuge in the basement, but the building imploded into the basement killing all there. My mother and her family might well have gone there too if they have been home!

My mother and her family went to the hills of Siena not too far off and lived in a cave. She said that the Germans were at the bottom of the hill and the Allies at the top and were shooting at each other past the opening of the cave!

My first cousin who lives in Chicago now and is about 76 years old was a small child at the time but remembers things vividly. I think she still suffers Post traumatic stress from it.

My father was part of the Special Forces teams that went in, friended the partisans, cleared out who ever they could then called in the coordinates for the bombings. July - Sept 1943. It haunted him till the day he died.

Lets not forget Germany started the war..the Italian citizens have a habit of supporting whomever is in power at a given moment and jumped onboard with the Germans. Along with the Port...Livorno had a large refinery that supplied all sorts of things for the Germans. The only way to destroy it was with bombs.

Livorno has through the ages been destroyed to rubble multiple times and it always rebuilds. I just visited Livorno last week....it is a beautiful city.