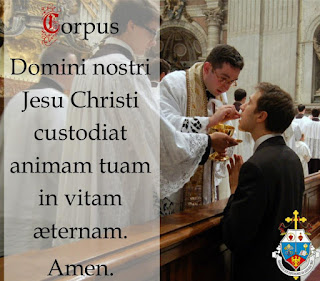 Clairvoyant that I am, I predict that soon there will be an appendix for the Ordinary Form of the Mass to make it more like the Extraordinary Form in style and order, although maintaining the OF Roman Missal completely.

I have thought for some time now that at least in the USA there should be similar postures for the EF and OF and that the EF should not have different postures for the High or Low versions, but the same (I think that prescribing postures is a USA novelty and goes back to the pre-Vatican II times. Others can correct me if I am wrong).

Apart from silly, outdated and worst of pre-Vatican II  arguments to the contrary,  the laity, if they so desire and according the capabilities, should indeed say, sing and chant those parts of the EF Mass that pertain to the choir and/or altar boy, and that there be no difference between a high or low Mass in this regard (this is a no-brainer in 2015!), there should be common postures for the following:

1. In the OF, the laity should kneel for the Penitential Act, no matter the choice. If PATFOTA becomes an option, the laity kneel as in the EF, when the priest begins them, otherwise the laity kneel after the invitation to acknowledge one's sinfulness in the modern options for the penitential act.

2. The laity stand for the Gloria and Collect.

3. The laity sit for the Liturgy of the Word/ Mass of Catechumens, except for the Gospel where they stand.

4. The laity both in the EF and OF stand for the Orate Fratres after having stood and sit down for the Credo.

5. The laity stand for the Secret/Prayer over the Offerings and Preface and kneel AFTER the Sanctus and remain kneeling through the Great Amen.

6. I would recommend that the Per Ipsum be chanted or spoken loudly in the EF with more emphasis on the saying and chanting of the Great Amen.

7. Stand for the Pater Noster through Agnus Dei, kneel after Agnus Dei.

9. Kneel or bow for the Final Blessing

10. Stand for the Last Gospel and Recessional.

Oh ok, basically that means another option will be inserted into the missal that will never be used. Just like the Roman Canon which is never ever used, not on Christmas, Easter, Pentecost etc. The present missal has the GIRM printed in the front of the missal, that to is ignored and not followed. The rubrics for the priest are printed in the missal in red and are ignored. The priest is supposed to wear the proper vestments when celebrating Mass, ignored. The new translation of the Mass is supposed to be used in totality, ignored.

So what exactly is the point. Everything in the Church has been destroyed, nobody cares any more about anything. Priests or laity.

It is very evident that until all the destruction of the past 50 years is declared a failure the Church has no hope of survival. Look at the state of the Church. Nothing needs to be said about this disaster of a pope. The bishops are spineless, effeminate, miserable excuses for shedphards. Priests are no better. Just attend any Sunday Mass. Silly priests who play up to the people, say impious Masses, lazy and have no Catholicity at all. And the laity. Can we even call the laity Catholic anymore. Ask the average lay Catholic if they believe in the Real Precense. They won't even know what you are talking about. They all believe every religion is just as good as another, they believe contraception is wonderful, abortion is permissible, divorce is fine. Ask them about the sacrament of confession, they will think you are crazy. Things are so bad that a Catholic could go into a Catholic Church on Sunday, hear a rotten secular sound "sung" listen to a reading by MLK jr read by a lay person and then told to go home. They wouldn't even realize that they didn't go to Mass. And they wouldn't care. It's silly to think that offertory prayers will correct anything. Everything that was changed and distorted has to go. We need to stop being new Protestants and return to the Faith of our Fathers.

In my experience, the problem for celebrants is neither a lack nor a surplus of options, but protestations from congregations, and reprimands from chanceries, whenever celebrants choose the more traditional options. In the USA, and in much of Central and South America, those souls (especially the young) seeking a transcendent experience of God have largely left the Church, leaving behind the Accommodationists. What does one do with a congregation of Accommodationists?

Anonymous, you make a sound point. My comment the other day on a previous post here about the "options" is that these are just two more. I would trust priests like Father here and many I know to use these. Of course, they already use the Confiteor and Roman Canon. The problem is, most will ignore it as you have written and just use "Lord, you were sent" and EPII.

Here is the problem though for them with this Appendix and I would like Father to comment on it.

My understanding is that there was an attempt to put the traditional Offertory in the Third Edition under St. John Paul II but it was resisted. Why? Because, if it is there, it would mean that the Talmudic table blessing which is dressed up to be a sacrificial offering actually means the same as the former. If EPII means the same thing as EPI, the Roman Canon, then that means the new Prayers over the Gifts must mean the same as the old Offertory. This will be dynamite.

I think though there is something else here; Pope Francis cares little about the liturgy wards (and he does celebrate Mass with great dignity as Father has noted) and he figures, this is another future popes problem, he has his own agenda, so I can see why he would let this go.

I think this is a de facto admission on the part of the CDWDS that the reformed liturgy is irreformable and that is a failure. It has lead to a disbelief in the faith and the real presence and the propitiatory sacrifice. This is, to me, an admission that the Missal of Paul VI's future is eventual abrogation. It is also an admission that that task is for another generation.

Father, I said the other day, this is the return to the 1965 Missal, maybe you are not alone in your sixth sense.

Somehow, I don't feel like these EF options would be any different. I think, to see use, they'd have to be required.


Dialogue, Vox Cantoris is right there was a missal published in 1965 - it is referred to here:

Vox, if the appendix does come about as it has already for the Anglican Ordinariate Roman Missal, it will be like the 1965 missal but that missal was simply a minor adaption of the 1962 Missal using the Maryknoll English hand missal for the English parts that were allowed to be in the vernacular almost as soon as Sacrosanctum Concilium came out.

Most people didn't realize that a complete reform of the 1962 Missal was on the horizon. And fortunately the worst of what could have happened officially did not happen.

Let's say that the appendix is simply laying the groundwork for a more similar resemblance between the two missals apart from an all Latin Liturgy but each Missal respected for what it strives to accomplish. Again, I am not speaking aobut the deformations of the celebration of the modern Missal, but actually celebrating as it is meant to be similar to Pope Francis way of celebrating it.

Most of the postures of the OF are derived from the Solemn High Mass...so there's actually not much to be done. A friend of mine has ran his parish exactly like this for the EF. It works rather well.

Wow, won't all of those things you listed be nice, Father.

Part of the problem is that so many Catholics don't understand that Mass isn't something we just "go to." We enter into the Sacred Mysteries. While I'm always hopeful, and hopefully joyfully so, I share the frustration of those who note that the Roman Canon is very rarely used-- it's almost always EPII, because the latter is "shorter."

Perhaps just as bad, or even worse, is the overall neglect of the Confiteor, whose absence actually makes the Church seem only this-worldly, to some extent. We have saints in Heaven and holy souls in Purgatory, but almost none but the well-catechized have ever heard of the Church Triumphant and the Church Suffering, let alone the Church Militant.

Plus, the Gregorian-chant ordinaries and responses aren't "hymns," and the music of the Mass is not "hymns," but the Mass: most people don't even know how much Gregorian chant gives to those who chant it. This music is part of prayer and spiritual formation. It is not, as so many priests and laypeople in so many of our suburban parishes especially treat it, "one mere musical option/genre/taste among many."

The 1965 Missal was what we referred to as the "New Mass." It was the Mass in English except for the Canon which was still in Latin until 1967 when all of it was in English. The POTFOTA were stripped of the psalm and as in the Requiem and were optional; they could be replaced by the sprinkling rite. The Propers were read or sung until 1967 (Musicam Sacram) when they could be replaced by hymns (the single worst thing next to Mass facing the people) and the Epistle could be read by a LayMAN. There were a few less crosses by the priest and genuflections and the Last Gospel was suppressed. We had St. Joseph's Pew Missals and the art for them and the Altar Missal was ugly and of the age. We had no idea another Missal was coming. By 1968 it was chaos they introduced the Sign of Peace by us Altar Boys coming down and passing it to the first person in the pew which was quickly scrapped to a handshake and I stopped going to Mass.

Rearranging deckchairs again. The reason most people kneel throughout a Sung Mass is that they are adopting Low Mass practice when people made their own private devotions. Standardizing lay postures for the EF and OF (the OF ones are actually more correct liturgically) is not going to disguise the fact that we have two distinct rites made even more distinct in that the manner of celebration of the so-called Ordinary Form is usually radically different.

I don't despise the OF although I don't attend it as much as I used to. I am long familiar with its sung Latin responses and find the 2011 English chants quite acceptable - would that they were used more often! A chanted NO with simple English Propers would be so much better than the 4-hymn sandwich that I would support it wholeheartedly; congregations need to be reconnected to authentic Catholic worship, and simply waiting a couple of centuries until the Roman Rite is restored (as it surely will be) is laudatory but not practical. Pope Benedict in his wisdom grasped this.

Dialogue, yes, you are correct but, nevertheless, what Vox Cantoris said was "Father, I said the other day, this is the return to the 1965 Missal, maybe you are not alone in your sixth sense". So, regardless of whether or not Rome published it, the fact is there was a 1965 missal that was published by other countries as well as the US that was found wanting and people don't want a return to what was offered in that "missal".