BOMBSHELL: WHEN IT COMES TO THE LITURGY EVEN I'M BEGINNING TO BELIEVE I AM CLAIRVOYANT! 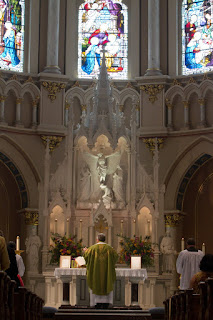 In my bulletin letter for my parish for Trinity Sunday and again for the upcoming Corpus Christi bulletin letter, I am emphasizing the need for Catholics to rediscover the Biblical attitude and disposition before Almighty God. This entails a sense of awe and reverence, a deep piety of the gift of the Holy Spirit called "Fear of the Lord" not only in the sense of the "fear of the pains of hell" but most of all because we should love God above all things.

I give in the Corpus Christi letter pointers to help recover a truly Catholic spirituality and piety, the proper disposition before God.

But as you know, I have been writing all along that the Sacraments, especially the manner in which the Holy Sacrifice of the Mass is celebrated, needs to recover the pre-Vatican II sense of piety, reverence and wonder and awe before the great Mystery that we celebrate and in which we are redeemed when properly disposed to the graces that are available.

There are three simple things that the Ordinary Form of the Mass could recover and is recovering in some places, that could be implemented without changing that missal at all. They are:

1. Ad Orientem for the Liturgy of the Eucharist
2. Kneeling for Holy Communion (and intinction as the norm for receiving under both Forms)
3. Rediscovery of sober, timeless chants for the Mass and mandating the Propers be chanted or spoken in a low Mass

Then in an organic way the Ordinary Form of the Mass's Roman Missal will be revised slightly, not dramatically to reflect a better continuity between it and the 1962 Roman Missal. In other words a third Roman Missal will evolve in a couple of decades if not well before.

This is what Cardinal Robert Sarah recently said to the liturgical conference "Sacra Liturgia as reported by Rorate Caeil and I have to admit, it sounds like Cardinal Sarah has been reading my blog! Cue the Twilight Zone music:


His Eminence, Robert Cardinal Sarah's Message to the Conference (link), in which argues strongly for the importance of liturgy sanity to any renewal in the Church:

2. Because the Sacred Liturgy is truly the font from which all the Church's power flows, as the Second Vatican Council insists (cf. Sacrosanctum Concilium, 10), we must do everything we can to put the Sacred Liturgy back at the very heart of the relationship between God and man, recognising the primacy of Almighty God in this privileged and unique forum in which we, individually and ecclesially, encounter God at work in our world. One cannot encounter God, my brothers and sisters, without trembling, without awe, without profound respect and holy fear. This is why we must rank what Cardinal Ratzinger called "the right way of celebrating the Liturgy, inwardly and outwardly" first amongst our concerns (Joseph Cardinal Ratzinger, The Spirit of the Liturgy, Ignatius Press, San Francisco 2000, p. 9).

3. When the Holy Father, Pope Francis, asked me to accept the ministry of Prefect of the Congregation for Divine Worship and Discipline of the Sacraments, I asked: "Your Holiness, how do you want me to exercise this ministry? What do you want me to do as Prefect of this Congregation?" The Holy Father's reply was clear. "I want you to continue to implement the liturgical reform of the Second Vatican Council," he said, "and I want you to continue the good work in the liturgy begun by Pope Benedict XVI."

My friends, I want you to help me in this task. I ask you to continue to work towards achieving the liturgical aims of the Second Vatican Council (cf. Sacrosanctum Concilium, I) and to work to continue the liturgical renewal promoted by Pope Benedict XVI, especially through the Post-Synodal Apostolic Exhortation Sacramentum Caritatis of 22 February 2007 and the Motu Proprio Summorum Pontificum of 7 July 2007. I ask you to be wise, like the householder in St Matthew's Gospel, who knows when to bring out of his treasure things both new and old (cf. Mtt: 13: 52), so that the Sacred Liturgy as it is celebrated and lived today may lose nothing of the estimable riches of the Church's liturgical tradition, whilst always being open to legitimate development (cf. Sacrosanctum Concilium, 23).

At the end of his message, Cardinal Sarah expresses the hope that he will be able to join the next Sacra Liturgia meeting, to be held on July 2016 in London. He also asks for prayers that he may faithfully exercise the service to which he has been called.
Posted by Fr. Allan J. McDonald at Tuesday, June 02, 2015

Nice to hear some good Church news for a change! Catholicism has been so depressing lately with the impending Synod and the German innovators and the push to change the Church's moral teaching. I go to mass and still try to read/sing the LOTH, but my enthusiasm has been less under this new Pope because of my worry about the direction of the Church back to the 1970's permanent revolution mentality. I was beginning to wonder if my conversion to the Church many years ago was a mistake, and if the Church was about to ditch everything and turn into something horrible like so many of the mainstream Protestant churches have become. This note from Cardinal Sarah is a bright note that just perhaps the Church is not going to simply throw out everything that the previous two Popes worked so hard to establish in the wake of the Vatican II Council.

I know what you men Charles.

I too converted to Catholicism a few years ago while I was in college. I felt stability in the Church under Benedict, at a time when the U.S was tumultuous. Now under Francis, I am not confident in the leadership of the Church, nor of the country. It's been difficult bc I no longer feel like I have something constant to rely on.

Anonymous 6.59. Yes, you do have something constant to rely on because the Church's teachings are unchanging. Although it seems a little bit unnerving at the moment we have to ignore it and just look to the constant teachings of the Church and, if possible, find a good reliable priest who says Mass according to the rubrics. That is how I and others have coped for many, many years. No matter what is being said by Kasper or the German bishops, or anyone else for that matter, the teachings of the Church are unchangeable - as Cardinal Burke and Bishop Schneider keep reiterating. Whoever attempts to change those teachings will go automatically into schism. If you are in the US you will be in a much better position than, say, if you were a Catholic in Germany or Holland where the bishops are leading the church there into schism. The Church in the US is in a much better state than most other countries as far as the bishops are concerned and I am sure they will give the leadership - just like the Polish Bishops - that they will not give communion to the divorced and remarried or to practising homosexuals. There may be individual bishops who dissent from that but that is all they are - dissenters. Hold tight - the barque will never sink!

In light of the comments by Charles G and Anonymous at 6:59 am, I would like to say that, as Catholics, it's important to integrate the teachings of the Church into our belief to such a degree that our Faith does not depend on the actions of men (women), including Popes, cardinals, bishops, priests or religious. Our Faith should stand on it's own, and as a soldier in Christ, we remain committed to Him even if every leader from the Pope on down should apostatize.

Of course it is much easier and a happier circumstance when we have others who believe as we do from whom we draw support for our beliefs and leaders who guide us to the Truth. And of course if our leaders turn away, this would wound us badly, but it should not be a cause for us to turn from the Faith. It would be a difficult trial, but as Peter said to Our Lord, when He asked if they too would leave Him - "Where would we go? You have the words of Eternal Life."

Learn and hold firm to the teachings of the Church. That you can indeed rely on. Hold to Christ. Him you can rely on. Man is fickle, and fails. God never fails.

Forget about Extraordinary Form and Ordinary Form. These appellations served their purpose in 2007 but in reality we have the Roman Rite in its 1962 incarnation and the new rite with all its options, babel of tongues, and endemic tendency to self-destruct under a wave of bad music and over-zealous creativity.

There will not be a compromise between the two in the form of yet another Roman Missal. No-one wants it. My hunch is that in a hundred years time the Roman Rite will be once again normative (and not the 1962 version - I expect the pre-Bugnini Ordo for Holy Week will be used in the next twenty years). Even if it takes 200 or 300 years to prevail over the Novus Ordo that is of little consequence.

Those who actually like the vernacular Mass are of 'a certain age' and their children and grandchildren don't practise anyway. There will be attempts to resacralize the Novus Ordo, in fact they have been going on since its inception. I am all for them. But the whole new Missal project was flawed, was pushed forward with indecent haste, and was undermined by defective scholarship and differing agendas on the part of its fabricators. This is becoming more and more evident as time passes.

To quote St Edmund Campion, in words that certainly apply to the Mass that he knew and celebrated: 'It is of God. It cannot be withstood.'

I agree with Jan and Bee.

I hope John is right. What I cannot foresee is how the NO parishes will make it through this.

As you know, while I love the 1962 Roman Missal, I know too that it will not become the Ordinary Form of the Mass ever again.

With all due respect, I beg to differ. In the coming restoration, the New Mass will be a thing of the past.

We are on the verge of great upheaval in the Church and in the world. The Church will go through a crucible of suffering and a schism, after which She will return to her ancient practices.

Rhoda Wise was a Catholic mystic who lived in NE Ohio and died in the late 1940s. Mother Angelica was cured at her home when she was a young girl.

She once made a statement that is quite haunting. She said, "The United States will go through a revolution so great that priests will be hung from telephone poles."

Our godless society is approaching, with great strides, the fulfillment of her prophecy. The persecution of the Church has begun in earnest and will intensify. The signs of this are everywhere.

It is through persecution that the Church will recover Her former glory, including the old Mass. The saints and mystics have said so.