I HAVE JUST MADE THE MOST STUNNING DISCOVERY IN FILM THAT SHOWCASES A BIT OF MY FAMILY HISTORY THAT I HAVE NEVER SEEN UNTIL NOW BUT WHICH MY MOTHER SPOKE OF OFTEN! 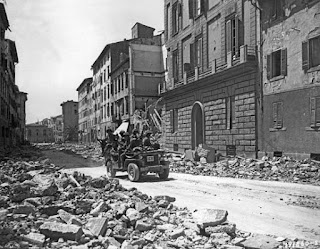 (UPDATE: Below video is a history I found, too, of the bombing of Livorno from Italian Wikipedia which I had never read before! Below the video I link even more film footage and some of it directly in front of where my mother lived, but now destroyed!)

I don't know what possessed me this evening. But I wanted to Google Livorno, 1945 and found the following video completely by chance, accident or some mystical design!  It is a visit by Winston Churchill to Livorno, Italy, my mother's hometown and birthplace (my sister and brother's birthplace too, I was born in Naples later) in August of 1944. My mother would have been in Livorno at this time, age 25. My father would have been in Livorno at this time too with the USA Army MP's some of whom are shown in the video. I don't see my father, but he had to be there. I don't recall my father talking about this visit but he may have. My mother and father married, December 1, 1945 in Livorno.

But what is absolutely stunning to me and has brought me to tears is to see the bombing destruction of Livorno by its port (a strategic port in Italy and subject to French, British and American  bombing from 1940 to 1944 with carpet bombing beginning in 1943! The final bombings in 1944 were by the Germans). My mother's apartment building is in this film, it has to be, as it was in what is called "Old Livorno" and by the port. My mother and her family avoided the worst of the bombing in early 1944 as the Germans evacuated the majority of civilians from the city not so much for their safety but because the Germans knew the civilians would help the Americans and English if they landed! They went to the hills of Siena and lived in a cave!

Her apartment building where she lived with her parents and siblings took a direct bomb hit and imploded into its basement killing all the residents who had fled to the basement for shelter when the air raid sirens sounded. My mother and her family happened to be away at the time visiting elsewhere in Livorno and escaped certain death!

I simply can't believe what I am seeing for the first time in my life, but I've seen it before through my mother's story telling! I can't tell you how moving this is!

See more footage of Livorno's destruction by pressing here and filmed directly in front of my mother's neighborhood (by canal with soldier walking toward canal by pressing here!)

Bombing of Livorno, in the course of the second world war, constitute one of the episodes more significant for the history of the city. During the second world war Livorno has suffered, in fact, more than 1000 alarms bombing and about one hundred aerial bombardments. The bombings were carried out by the American aviation with the bombers B-17, by the French aviation with aircraft Amirot, aviation English with the envisaged Avro Lancaster and the German aviation. Livorno was one of the Italian cities more disastrously affected by the war. The bombings were started in 1940 by the French aviation with modest results. Continued from 9 to July 13, 1944 with daytime raids by the Americans and night by the British. Only from 1943 began the systematic destruction of the city with the carpet-bombing.

In May 28, 1943  destroyed was the maritime station and the district of Venice (where my mother lived). Seriously Affected were the square of the Voltone, piazza Magenta, via Maggi, via Baciocchi, via Marradi, via Montebello, viale Regina Margherita, via grass, the port, the industrial area and other points.

With the bombardment of May 28, 1943 beginning a tragic series of bombings that in thirteen months caused enormous damage and many casualties in civilian population, 300 victims and about a thousand injured.  170 buildings were destroyed, 300 seriously damaged and 1300 damaged in a mild form. [ 4]

The June 28, 1943 bombing seriously struck the central station and adjacent area, the Voltone, the via de Lardarel, via Grande Turret district, industrial area and other points.

On July 25, 1943 were affected the Voltone district, turret, via grass and other points.

The April 14 and 15, 1943 there were considerable damage to the Central Station and adjacencies.

On 19 May and June 7, 1944 these two bombings, especially the last, were of a violence than the previous ones, completing the destruction of the city enclosed within the so-called black region, fortunately evacuated avoiding tens of thousands of victims.

July 29, 1944 bombardment by the German aviation, with little equipment and slight damage in the area around via Grass.

The Germans declared the city a Black zone. For black zone is indicated the city to be evacuated with the order of prohibition of transit of any risky movement, offenders were shot on sight. The decision of the German authorities forced displacement of a large part of the city was the proof of their exclusive power over Livorno. The military command airspeeds the ordinance for the evacuation of the population stating with the inability to protect in another way the security of Leghorn in the face of the evolution of war but thereby prevent acts of hostility on the part of the population in the case of a landing of England and the United States. THE livornesi had only eight days to abandon their homes and given the scarcity of means of transport were forced to abandon most of their possessions.

During the period of black area of the city, there was no respect for the inhabitants of the town and their homes were looted by the Germans. The municipal offices remained until the Germans  declared the city black zone. This remoteness prevented anyone to return to the city for which the town hall was displaced in Montenero (above Livorno where the Shrine of Montenero is).

In the subsequent carpet-bombing the city even the City Hall was hit by three bombs, one of them destroyed the left-hand corner of the building in which it was placed in the hall of the mayor, the representation of the junta and the premises underlying. [ 6] [ 9]

Father, I can see why you are moved, to now see the devastation and imagine the suffering of your mother and your family that words can't often convey. We are the lucky generation to have escaped world wars of the magnitude our parents went through. It is only with hindsight that we are able to see the Divine plan. In your case, His keeping your family safe has resulted in a holy priest who is helping to rebuild the Faith. God is good!

Wow, that is extraordinary! What an incredible "find" for you (although you must give the Holy Spirit His due here--not simple chance that you happened to google and find this pearl!). The clarity of the film is astonishing even given that it was assuredly professionally done. You will surely treasure this into eternity...

Interestingly, when US troops were camped in a town near Livorno, there was an 11 or 12 year old girl that always came into the camp bringing fruit or pastries for the soldiers. They teased her about how skinny she was and nick named her "Sticks." This girl grew up to be Sophia Loren.

I looked at the film video. Truly amazing footage. And your mother escaping certain death. God,through her Guardian angel was looking after her.