ON THE 25TH ANNIVERSARY OF THE DEATH OF SAINT MOTHER TERESA OF CALCUTTA, I REPRINT A POST I WROTE ABOUT SIX YESRS AGO…

This was the front page story in the Augusta Chronicle on Tuesday, September 9, 1997, the day after a memorial Mass for Mother Teresa of Calcutta had taken place at the Church of the Most Holy Trinity in Augusta at our normal Monday 12:15 PM daily Mass time. The church was packed with over 900 souls!

By Staff Writer/September 9, 1997
About 900 people packed Augusta's Catholic Church of the Most Holy Trinity on Monday, September 8, 1997 at 12:15 PM to show their devotion to Mother Teresa of Calcutta who died on Friday, September 5, 1997. 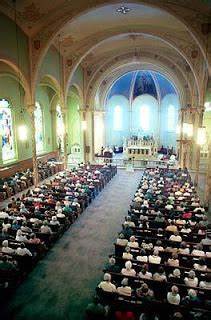 During communion, worshippers filed past a photograph of the nun, mounted on a stand draped in white. A simple bouquet of white baby's breath lay before it on the floor.In the picture, Pope John Paul II assists a smiling Mother Teresa as she walks down steep but shallow steps. She wears a dark sweater over her sari. And except for sandals, her feet are bare.In her photographs she always looked frail and hunched over, said Elizabeth Funsch, who saw Mother Teresa in June in New York. But in person, she didn't look frail, she had big bones, Ms. Funsch said."She was not what I expected, she looked very strong, even in a wheelchair. She looked like she could deal with a lot of stuff," Ms. Funsch said.Her ministry was not just to Roman Catholics but to all people in need, regardless of their creed or race, said the Rev. Allan McDonald, pastor, in his homily."Mother Teresa saw the good and sacredness of each and every person no matter where or who they were." he said."Many would say that she is a saint because of her great works," he said. They would point out the Congregation of the Missionaries of Charity that she founded, which numbers today more than 5,000, or that she gave the sick poor of Calcutta a place to die with dignity, he said.Some would say that she was a saint because she stood before President and Mrs. Clinton, who are pro-choice, and said that abortion is the greatest violence against humanity that the world has even known, he said.Some might point to the hospices she started for AIDS patients when this disease was most misunderstood."Many of its victims were abandoned by family and friends out of fear of contagion or ignorance or prejudice," he said.She knew, however, that salvation and becoming a saint rests with God alone and is a gift, said the Rev. McDonald. Nothing anyone could ever do in this life would ever be enough to gain salvation, he said."Mother Teresa gave her life for Jesus and for the church, not for earning her sainthood or salvation, but as a powerful testimony to her gratitude, to her thankfulness for the great things that Jesus accomplished for her and all humanity," he said.Those who came left the church quietly.Pamela Sherlock of North Augusta had never read Mother Teresa's books but came to show her devotion to her, she said.Fran Sloan of Augusta also came to pay her respects."I think she is a good example of how all us Christians should act," said Ms. Sloan, a Catholic. "I just wanted to show my respects. It is really a joyful occasion, I know she is in Heaven," she said.
Posted by Fr. Allan J. McDonald at Monday, September 05, 2022