ANNIVERSARY OF SUMMORUM PONTIFICUM, THE FEAST OF THE EXALTATION OF THE HOLY CROSS, SEPTEMBER 14, 2007 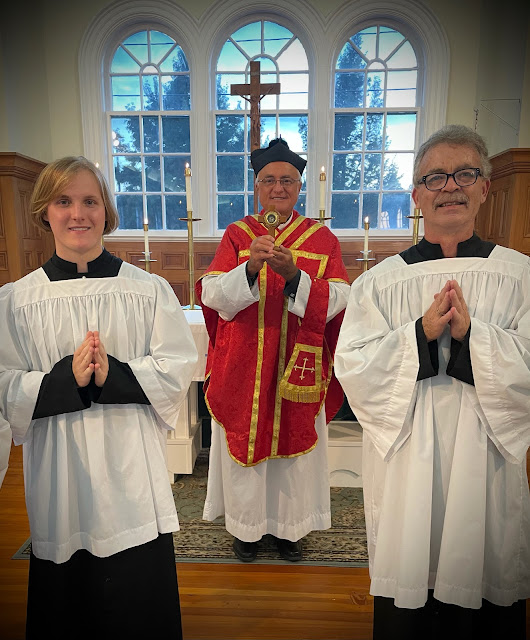 Under Pope Benedict, the stale air of the liturgical spirit of Vatican II was replaced by a rush of fresh, pure oxygen as Pope Benedict, in the most liberal and flexible way, allowed for authentic traditional diversity, not uniformity, in the Church’s liturgy by allowing the ancient Traditional Mass to have a near equal footing with the Modern, Contrived Order of the Mass.

The humility, openness, flexibility and liberality of humble Pope Benedict would all be canceled by the current more rigid, backward looking to the 1960’s, narrow in vision papacy.

I celebrated my first EF Mass in Macon on this day, 2007, at 7 pm, a Friday, with a Tornado watch and serious thunder storms! We had 500 in attendance!

Fr. McDonald, I saw a post from JuventutumDC that one of the parishes in Arlington that had their traditional Latin Mass relegated to the gym had renovated that space to provide a sacred setting for the Mass. Just crazy times.

Exposure to pure oygen can have toxic effects. As a former SCUBA diver, you should have been aware of this.

Fr K, instead of trying in a painfully obvious way to be “clever,” you should be congratulating your brother priest on his liberality for offering the TLM. You come across as an Ebenezer Scrooge type before his awakening to see the good in people. Bad form!

Things WILL normalize again. The only question is when.

I once heard a quote--possibly from St. Thomas A, that "evil militates towards absurdity." Since 1969, we have been creeping closer and closer to that absurdity, but I fear we are going to have to watch this nonsense play out to its inevitable end before we experience anything like normal again.

By the way, Jerome is my middle name.

At this point in the Church’s history we have a lot of “empty cassocks” who are unworthy of their office and in normal times would be dealt with properly. They aren’t interested in a Church. They are worldly men who are happy to get along with the sick zeitgeist. I have never been ashamed of my Church until this papacy, run by a nasty man lacking in charity. A pastor he is not but an enabler of evil. He talks big about the evil of abortion yet attacks politicians who were willing to do something about it while providing photo ops for truly evil “Catholics” who support it. Basta!

Father McDonald said..."...by allowing the ancient Traditional Mass to have a near equal footing with the Modern, Contrived Order of the Mass.'

Peter Kwasniewski: "After its Prologue and Article 1, the remainder of Summorum Pontificum subtly holds the traditional liturgy hostage, or gives it, as it were, second-class citizenship."

Peter Kwasniewski: "This, then, is the fundamental problem with Summorum Pontificum: it is internally incoherent, founded on a monumental contradiction caused by the worst abuse of papal power in the history of the Church."

Beginning with Mr. John Nolan, many folks here have insisted that Peter Kwasniewski is a first-rate scholar/liturgical expert who declarations are to be take seriously.

Peter Kwasniewski enjoys a solid following among "traditional" Catholics. In line with that, are we to take seriously Peter Kwasniewski's above trashing of Summorum Pontificum?

Father McDonald, I am on board with the great love, respect, and enthusiasm that you have for Pope (Emeritus) Benedict XVI. I appreciate greatly that Emeritus attempted, via Summorum Pontificum, to achieve liturgical peace within the Latin Church.

Father McDonald, I disagree with your declaration that the "humility, openness, flexibility and liberality of humble Pope Benedict would all be canceled by the current more rigid, backward looking to the 1960’s, narrow in vision papacy."

As time marched on, it had become clear that Pope Benedict XVI's liturgical peace plan had failed.

Bishops, as well as priests, who had resisted Summorum Pontificum, contributed to said plan's failure.

One thing is certain: Pope Francis is not responsible for the collapse of either liturgical peace plan in question.

I see a supporter of the failed papacy has showed up. Question:
Do you have a statue in your home of PF that you worship?

Hyperbaric pure oxygen is used to treat necrotic and gangrenous tissue, especially in the extremities.

There are two symptoms of necrosis in the Ordinary Form. First was the disrespectful execution of which the Clown Mass is the poster child. Second is the weak liturgy that constricted the flow of the Holy Spirit and caused the Clown necrosis.

RCG! Great! It is great for those who dove into the OF Mass and came up too fast escaping it, causing the bends.

And you could also add, the water and bycyce necrosis. Well said!

"Exposure to pure oygen can have toxic effects." The statement is true and stands.

"Oxygen toxicity, caused by excessive or inappropriate supplemental oxygen, can cause severe damage to the lungs and other organ systems. High concentrations of oxygen, over a long period of time, can increase free radical formation, leading to damaged membranes, proteins, and cell structures in the lungs. It can cause a spectrum of lung injuries ranging from mild tracheobronchitis to diffuse alveolar damage."

Fr K is more concerned with “tit for tat” than that only a minority of Catholics who bother to go to Mass believe in the Real Presence. Sound priorities if you are a failed liturgical reform denier!