THIS IS AN EXCELLENT COMMENTARY AND AT ITS CORE, FR. MARTIN SHOWS US HOW THE ABUSE SCANDAL ESCALATED IN THE 1970’S AS REVEALED IN 2002; BUT OF COURSE THE TRADITIONAL LATIN MASS IS THE PROBLEM IN THE CHURCH, NOT FR. MARTIN’S GLOWING PRAISE OF REMBERT WEAKLANDS PECCADILLOES 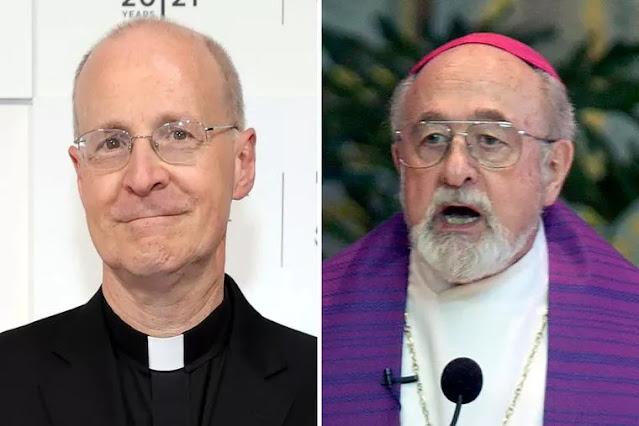 Disgraced (and hopefully repentant and reconciled prior to his death) Rembert Weakland OSB, is a case study in the scandal that has marred the priesthood and alienated untold number of Catholics. Fr. Martin is part of the problem not the solution. Press the title for the National Catholic Register commentary:

Father James Martin’s Tweets About Weakland Should Offend All

The priest’s downplaying of Archbishop Rembert Weakland’s grave offenses is a painful reminder of the steep hill that the Church in the U.S. still must climb in order to regain its moral authority.

If anyone who has lived prior to the Council until today looks around even to their own families and circle of friends, they will see the carnage the last 60 years has wrought. I was just at a visitation of an old friend. He was trained exclusively in Catholic schools, was married in the Church, and raised his children as Catholics. He is not receiving a Catholic burial because he drifted away from the Faith. I asked him once, why, and he responded. It all started when they began changing the Mass. So his wife no longer bothers, his children no longer bother, and his grandchildren no longer both with the Church. There is a massive demographic sinkhole and we are standing on the abyss. The only way out of this problem is a return to Tradition and repudiating priests like Martin. I will say what many think. There is no "there, there" in the modern Catholic Church. Just a bunch of meaningless buzzwords like synodality, accompaniement, etc.

TJM, what you relate to us is one of the core reasons for the decline in Catholic Mass attendance, and worse, leaving the Church altogether where there isn't even a Catholic funeral and this from a man who was formed in the Faith with all the tools of the Church at the time. What so many fail to recognize is the trickle down effect to subsequent generations. It isn't just a cultural thing, it is a Church thing.

The other aspect I have highlighted in the past is that when Vatican II opened the door to changes in the Church, the most notable for the laity, the change in the Mass and how religious life was decorated and lived, many thought any and everything could change, to include sexual morality and contraception--that group too was disappointed and left the church especially over Humanae Vitae and there was and is a trickle down effect to subsequent generations.

But it all goes back to Vatican II and how it was implemented, make no mistake about it!

Very good points but I think the problem with the implementation of Vatican II was that changes to the Mass were not asked for by the vast majority of Catholics but only a handful of “reformers.” My friend was one of those who gradually drifted away initiated by changes in the Mass. In my family two of my uncles were outraged by the changes and left. The hierarchy could have offered a 2 track system: a Sunday Mass with the changes and another without. But that would have required judgment and prudence. Sometimes in my more cynical moments I think of V II as a “clergy liberation” movement: no more Latin, no more cassocks! I think if the people had been consulted with options like, would you like us to change the Mass or would you prefer we relax our position on artificial birth control, which option do you think would have been selected?


Sometimes people have names that just suit them.