THIS POPE AND HIS TRUSTED ADVISORS TO WHOM HE LISTENS, ARE OPPOSED TO CLARITY OF DOCTRINE AND MORALS BECAUSE THIS STUNTS DEVELOPMENT; THUS THE TRADITIONAL LATIN MASS WHICH FORMS THOSE WHO ATTEND ARE TO BE BANNED BECAUSE OF THE CLARITY THIS MASS PRESENTS AND THE CLEAR FORMATION OF CATHOLICS IN THE DOCTRINE OF THE FAITH, WHAT THIS HOLY FATHER DECRIES AS WRONG HEADED TRADITIONALISM 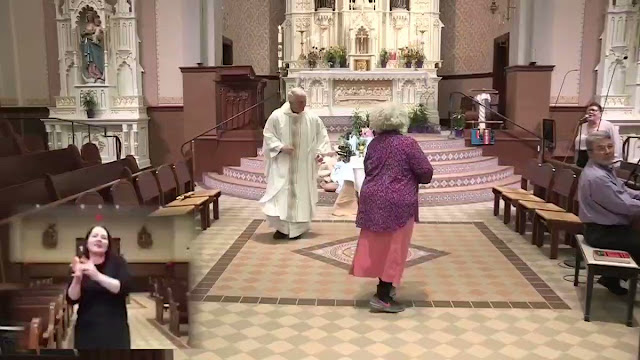 You can watch the twitter video of this monstrous deformation of the Modern Roman Missal and its adherents on Twitter here!

The pope had another informal conversation with Jesuits in Canada and you can read the transcript here.

But two points he makes shows us why the Traditional Latin Mass is such a threat to his papacy and that threat is clarity of doctrine which His Holiness believes is fundamentalism:

Speaking of abuse, I am a canon lawyer. You have made a lot of changes. Some call you the pope of changes. You have also made changes at the penal level, with regard to abuse, and this has been beneficial for the Church. I would like to know how you see things evolving to date and whether you foresee further changes in the future. (My comment: Pope Francis' answer is not the to the question that is asked but goes to the heart of His Holiness methodology of incoherence, ambiguity and confusion, which His Holiness sees as a good thing):

Yes, that is true. Changes needed to be made, and they were made. Law cannot be kept in a refrigerator. Law accompanies life and life goes on. Like morals, it is being perfected. Before, slavery was lawful, now it is no longer. Today the Church has said that even the possession of the atomic weapon is immoral, not only its use. This was not said before. The moral life is progressing along the same line. It is the teaching of Saint Vincent of Lérins: ita étiam christiánae religiónis dogma sequátur has decet proféctuum leges, ut annis scílicet consolidétur, dilatétur témpore, sublimétur aetáte (“The dogma of the Christian religion must follow these laws. It progresses, consolidating over the years, developing with time, deepening with age”). Saint Vincent of Lérins compares the biological development of humans with the transmission from one age to another of the depositum fidei, which grows and consolidates with the passage of time. Human understanding changes with time, and human consciousness deepens.

The vision of the doctrine of the Church as monolithic, to be defended without nuance is wrong. That is why it is important to have respect for tradition, the authentic one. Someone once said that tradition is the living memory of believers. Traditionalism instead is the dead life of our believers. Tradition is the life of those who have gone before us and who go on. Traditionalism is their dead memory. From root to fruit, in short, that is the way. We must take the origin as a reference, not a particular historical experience taken as a perpetual model, as if we had to stop there. “Yesterday it was done like this” becomes “it always has been done like this.” But this is a paganism of thought! What I have said also applies to legal matters, to law.

Jesuit asked the pope regarding the debates surrounding the liturgy and its importance in formation.

The pope noted that when "there is conflict, the liturgy is always mistreated."

"In Latin America 30 years ago, there were monstrous liturgical deformations. Then they moved to the opposite side with a backward-looking intoxication with the old. A division was established in the church," he explained.

The pope said his actions, including his recent apostolic letter "Traditionis Custodes" ("Guardians of the Tradition"), "aimed to follow the line taken by St. John Paul II and Pope Benedict XVI, who had allowed the ancient rite and had asked for subsequent verification."

"Traditionis Custodes," Francis said, "made it clear that there was a need to regulate the practice, and above all to avoid it becoming a matter, let us say, of 'fashion' and remaining instead a pastoral question."

My comments: As I mention, the Holy Father's disdain and phobia of the Traditional Latin Mass and those who desire it comes from his fear that they want to undermine the "development of morals and doctrine" which His Holiness papal magisterium is engineering.

The clarity of doctrine and moral certitude which accompanied the organic development of the Traditional Latin Mass is no longer deemed to be a good but a pariah and thus the need to ruthlessly suppress it.

In terms of what is implied in the Holy Father's off-the-cuff answers is the following:

1. The TLM communities want clarity about canon law and morality. Thus they want to exclude from Holy Communion those who publicly manifest a life in opposition to the morals of the Church and her other teachings, such as the support of legal abortion by public servants, the support of same sex or the variety of sexes promoted by the LGBTQ++++ communities and their dogmatic ideologies.

Thus President Biden and Speaker of the House Pelosi are warmly greeted by this pope and confirmed in their political stances regarding abortion on demand and welcomed to the Eucharistic sharing at Mass.

(Keep in mind, that those who attend the TLM or conservative Catholics exclude no one from attending Mass (unless they are a real threat) but simply exclude them from receiving Holy Communion if they are in public manifest sinfulness, such as a public marital contract while a Sacramental Marriage still exists.

2. Traditional Catholics thus are ridiculed, called names, considered mentally disordered and are forbidden to have the Mass and way of Catholicism permitted to them by a sainted pope and a still living emeritus Bishop of Rome.

3. The pope acknowledges that in Latin America (and elsewhere, like Chicago and Italy) there were (and still are) " monstrous liturgical deformations." Yet the Holy Father cracks down on Traditional Catholics and the form of the Mass allowed to them but skirts the greater trouble which the Modern Form of the Mass and those who celebrate it experience, not just in the past 30 to 60 years, but today, today, today!!!

I think I have tried to address that, no?

Rome simply does not care. The Church is a rump of what it was in 1960. The only group that is growing is the group devoted to the TLM and most of them are young with families. That group actually believes what the Church teaches, so they need to be suppressed. TC is evil and will not stand. Fortunately most bishops have quietly ignored it. The careerist crowd have embraced it. They may end up like Bugnini if the direction in Rome changes after this disastrous papacy ends

I have to wonder, at the risk of Mark Thomas heckler’s veto, is this really the leader the College of Cardinals thought they were electing? Against my own prayers he sounds like some late night television fakir. Are his handlers asleep or are they idiots?

Honestly, Fr. has some decent moves. The others aren't bad either.

I suspect a bit of both.

One only hopes this was before, and not after, they got the Super Slam and milkshake at Denny’s.

If you offer Mass while wearing swim trunks and nothing else, using a blow-up raft as an altar, you get a "tut-tut."

If you offer the same Mass offered or attended by Padre Pio and a thousand other saints, you are the enemy of the unity of the Church and you are smacked down as hard as possible.