EUCHARISTIC REVIVAL: WHAT IS THE GOAL AND WILL IT WORK? OF COURSE, MY RECOMMENDATIONS WOULD WORK AND WITHOUT HAVING TO BUY INTO ALL THE STUFF THE BISHOPS WANT US TO BUY INTO!

Both of these photos are of the same priest celebrating the same Modern Roman Missal in the same church! Can you tell a difference? 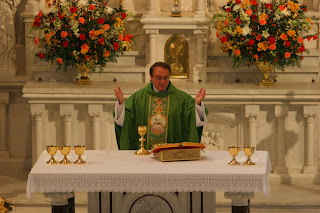 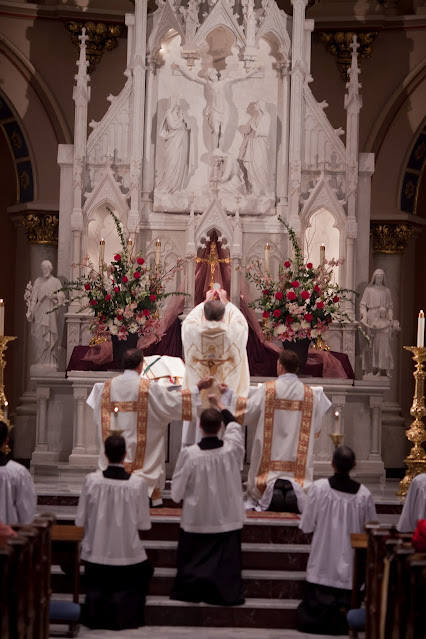 If I do say so myself, in my more than 42 years of priesthood, I think I have given excellent catechesis as it concerns what the Mass is, the presence of Christ in its celebration and the faith of the Church that every Mass enters into the One Sacrifice of Christ and His glorious resurrection in a timeless, eternal way. That means that the One Sacrifice of Christ and His real Presence is a "now event", not a past event only or a future one to expect only. It is eternal, like God is eternal. He is "I Am", not "I was" or "I will be."

The Mass is the experience of the presence of Christ in two general ways: in those who gather to celebrate the Mass including the priest-celebrant. I combine priest and laity into one group whereas Vatican II indicates it as two realities.

Finally, Jesus Christ, crucified and risen, is present in a mysterious/mystical/transubstantial way under the elements or species of bread and wine. His Real Presence in this manner is for us to adore and savor prior to "eating and drinking" and the eating and drinking is made palatable as the Bread and Wine masks or veils the real presence of the Risen Lord which is the foundation of what we actually see with our physical eyes and through the other senses with have.

Thus, the real presence of Christ under the form or species of bread and wine is unique compared to the other two which are more general and demand a different form of devotional and physical acceptance.

I think many today, including bishops, have come to realize that the modern Mass in its manner of celebration isn't contributing to the building of the true Faith of the Catholic Church in the Divine Person of Jesus Christ and the two other Divine Persons of the Most Holy Trinity. There isn't orthodoxy in this regard and thus when we are dismissed from Mass there isn't ortho-praxis, meaning the proper practice of our Catholic Faith through the good works of Catholic morality.

Without changing the Modern Roman Missal one iota but, yes, changing its rubrics, we could recover what was good about the 1962 Roman Missal as it concerns enabling orthodox belief in the Real Presence of Christ and His One Sacrifice at the Mass.

Rubrically, there needs to be three major changes to the Modern Roman Missal:

1. Ad orientem for the Mass with the same style of choreography as the 1962 Roman Missal mandates

2. The "low voice" Roman Canon with the same rubrics as the 1962 Roman Canon (for daily Mass I would recommend only allowing the Second Eucharistic Prayer and suppressing all others)

3. Kneeling and at the altar railing for the reception of Holy Communion with only the clergy and officially installed acolytes distributing Holy Communion

My final remarks about the silent Eucharistic Prayer:

This will take a goodly amount of catechesis to help those who attend Mass to know that this promotes the mystical and contemplative  spiritual experience of not only the priest, but the laity, entering into the Holy of Holies at this point in the Mass regardless of the language used.

Recently I was speaking to a life long Catholic who watches the daily Mass on EWTN and complained that they are praying out loud in Latin the Eucharistic Prayer. She likes the vernacular and remembers well that the Canon was prayed in Latin prior to Vatican II and how much she liked the vernacular better.

Her memory is faulty though. She might have known that the Canon was in Latin but she did not hear a Latin Canon. IT WAS SILENTLY PRAYED BY THE PRIEST! If he wanted to be illicit, He could well have prayed it in his vernacular, whatever that might have been!

We don't need a wordy out loud Latin Canon! We need a silent canon in whatever language as the means to assist all of us in the mystical experience of entering the Holy of Holies!

My three mandates would create an outstanding Eucharistic Revival with the current Modern Roman Missal!

The second one is much more tradition because it is versus tonsure.

100% agree on Point 1. To me, this remains the most destructive change ever to have occurred.

Point 2, I'm not completely sold. How can people pray along if they cannot hear / do not know at what point in the mass the priest is at (sanctus bells only help one along to a point)? I understand the reasoning behind sotto voce, I just don't completely care for it. I pray most of Divine Liturgy along with the priest. It's just in my head. There are options to pray certain parts inaudibly, I'm glad we mostly do not do this. I think the Roman Cannon for Sundays is definitely preferable. Perhaps it should reclaim pride-of-place.

Point 3, its the tradition of the Roman Church, bring it back. Those who can, do; those who can't, stand.

Agreed. Add in a return to the earlier lectionary/propers, Communion only on the tongue, a limitation on the types/styles of hymns sung, and the ordinary chanted at least partially in Latin and even many traditionalists would be satisfied. Of course abrogation of TC and reinstatement of SP would be necessary as well.

If any of the Eucharistic Prayers needs dropping it is surely EP II, given its dodgy genesis. At the very least it should never be separated from its proper Preface. EP IV, loosely based on the anaphora of St Basil the Great, is particularly suitable for weekday Masses where the Credo is not said. Since we are talking about the Novus Ordo, I would not wish to lose EP III which in many ways typifies the rite.

The Roman Canon (EP I) had long been a target for the more progressive liturgical reformers and its inclusion in the NO was due to the intervention of Paul VI. I agree that it should be the preferred option for the principal Sunday Mass and I would suggest it be said quietly up until the Qui pridie (allowing for a polyphonic Sanctus), then recited or sung by the celebrant until he intones Mysterium Fidei, with the Benedictus standing in for one of the 'acclamations'. While this is being sung, he continues quietly until the Per ipsum.

In 2009 the solemnity of Pentecost marked the bicentenary of Joseph Haydn's death. Pope Benedict used as the Mass setting the composer's 'Harmoniemesse' with choir, soloists and full orchestra. In the NO the Sanctus and Benedictus cannot be split, so the Pontiff had to stand at the altar for twelve minutes or so before he could begin the Canon. I shouldn't think he minded in the least, but it did highlight one of the weaknesses of the new Mass, viz. its excessively linear nature.

Also praying of the Canon soto voce was fine when the Sanctus went on and on. The history of the Mass makes clear that this was a late tradition. Besides, does the priest praying soto voce encourage the faithful to know and understand the Eucharistic theology of the Church?

One might say that the faithful don't listen to the Anaphora but that is a slight to those that do and are nourished by these prayers.

The idea that the function of the Canon is to 'encourage the faithful to know and understand the Eucharistic theology of the Church' dates from the second half of the 20th century, whereas the recitation of the Canon 'submissa voce' can be traced back at least as far as the ninth century - hardly a 'late tradition'.

I remarked on the 'excessively linear nature' of the new Mass. Your comment highlights another feature, its all-too-obvious didacticism.