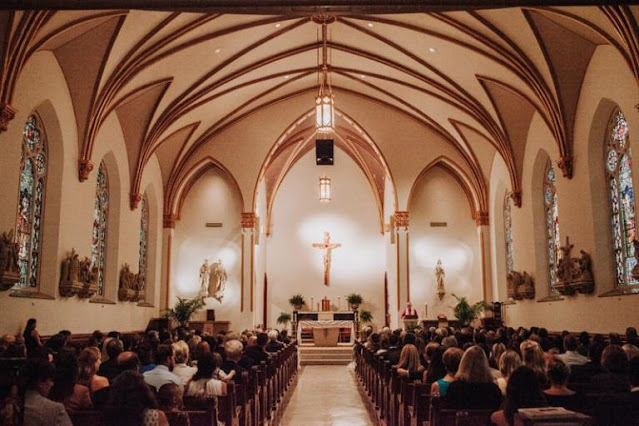 Savannah’s Sacred Heart Church after its high altar is re-enchanted (as an aside, the tall candlesticks on the high altar somehow in the early 1970’s made their way from the Church of the Most Holy Trinity in Augusta to Sacred heart. These historic candlesticks were on Most Holy Trinity’s altar in 1863 when that church was consecrated! Don’t get me started on how that happened!): 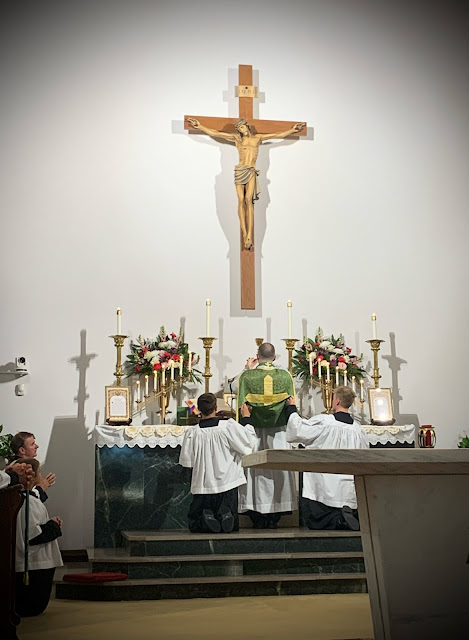 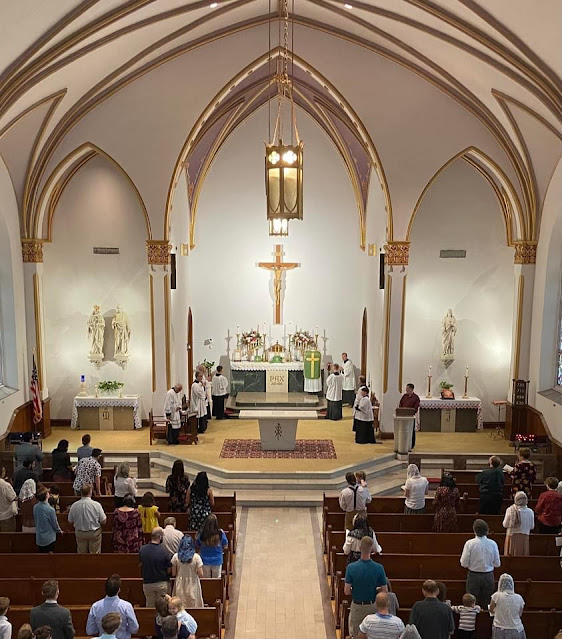 Those historic candlesticks on the altar from which they came: 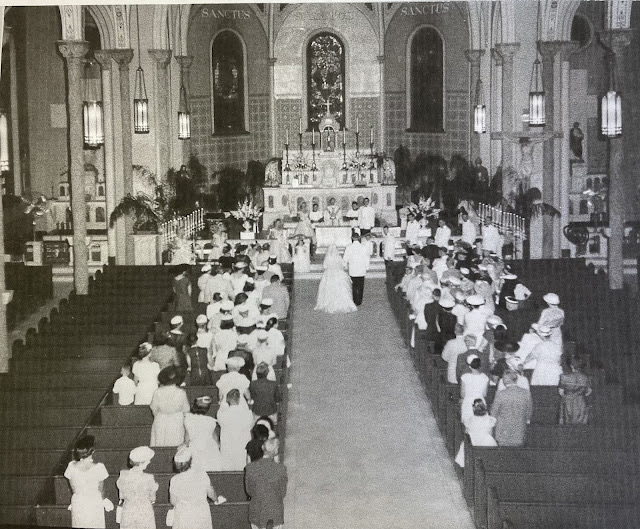 Sometime in the late 1960’s and without warning and from one Sunday to the next, my home parish of St. Joseph Church in Augusta underwent a metamorphosis which wasn’t a worm turning into a butterfly but a butterfly turning into a worm.

St. Joseph’s original church, now their social hall, was a very simple, low flung a-frame building. But the pre-Vatican II sanctuary was beautiful in my childhood eyes. There were the three typical altars, the main one with the tabernacle, six tall candlesticks (more for major feasts) and two flower arrangements for each Sunday flowers were allowed. If the priest sat, it was to the side of the altar and three steps down.

But then, from one Sunday to the next and without any catechesis as I recall, the high altar was pulled away from the wall to become the main altar, which was fine, but the tabernacle was placed on the side altar under Our Blessed Mother’s statue.

The priest’s chair was placed behind the altar against the wall, dead center, and high than the altar. And two “rinky-dink” candlesticks were placed on the altar.

When I walked into that church that first Sunday and saw it, my heart sank. The sanctuary looked so Protestant and the altar stripped down like on Good Friday. And the priest’s chair dead center towering over the altar and us lowly lay people. I was in about the 8th or 9th grade and didn’t have the word to describe my feelings about the priest’s chair dead center and the tabernacle shunted to the side, but that word is clericalism.

And that new arrangement in my mind indicated symbolically, that Jesus was less important that Sunday and moving forward and all the things I associated with the divinity of Christ, the Second Person of the Most Holy Trinity were being stripped away, such as touching the Host by receiving in the hand, standing and on the run and not from a priest but a lay person.

Jesus and Holy Communion weren’t as sacred as They once were was symbolically taught to me and without words by what I saw in those early years after Vatican II.

The temptation to become a “none” by these symbolic moves was a great temptation that by the grace of God I avoided.

Tragically, today about 80% to 95% of Catholics have given into the temptation to abandon the Catholic Church, her Mass and become something else or nones.

For what it's worth, the current high altar is noble, simple, pleasing to the eye and creates a sense of verticality and holiness. This could well be a model for ad orientem should that posture ever be readopted as normative. It doesn't look overly complicated to implement. Separately, a current verses populem altar could be repurposed in this way simply placing the tabernacle upon the mensa. In the Byzantine East, this is how our altars are constructed and setup. They are freestanding, the tabernacle is placed on top and the priest circles the altar for the multiple incensations. Candles/candelabra ideally aren't placed upon the mensa itself but, behind. In our instance, theres an intentionally constructed and matching platform if you will, affixed to the back of our holy table for this purpose. For us, only the antemension (akin to the corporal with an image of the reposed Christ, the bishops signature and relic sewn within), book of gospels, hand cross, lance/spear/communion cloth (akin to a purificator) are on the holy table outside of liturgy, chalice, paten/diskos and star with the holy elements during divine liturgy (something much similar, yet modified for Divine Liturgy of the Presanctified Gifts). Many of our parishes, mine included, have a stand, apart from but close to the holy table, upon which the service books rest.