TAKEN TODAY, THE TWIGHT ZONE OF TWO POPES, BOTH INCAPACITATED IN ONE WAY OR ANOTHER

#PapaFrancesco and the new cardinals from Pope Emeritus, #BenedettoXVI, for a brief greeting.  After his blessing, that of the Pope, and having prayed the Salve Regina together, the new cardinals went to the Apostolic Palace or Paul VI Hall for courtesy visits #Concistoro 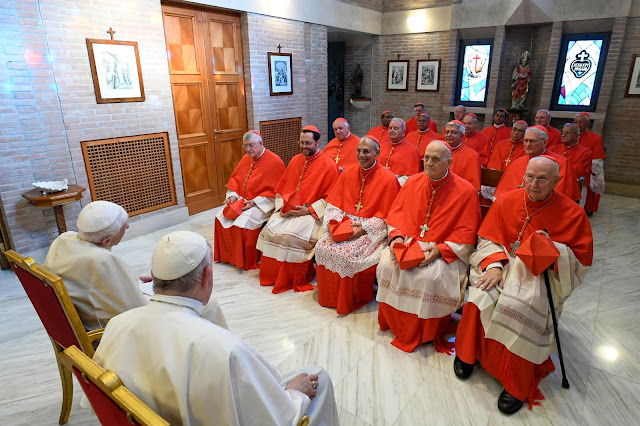 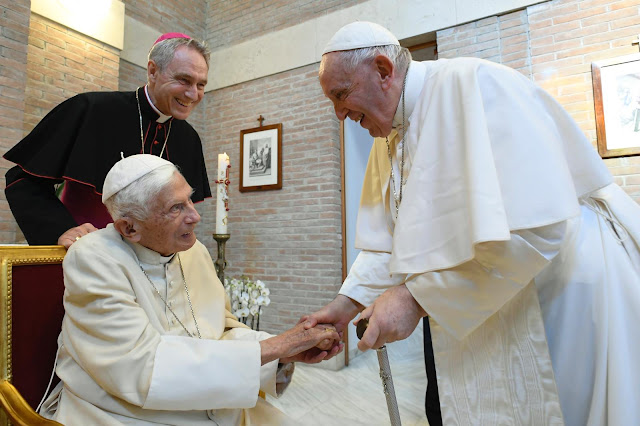 Vatican City (AsiaNews) - Pope Francis has called upon the 20 new cardinals solemnly created this afternoon at St. Peter's Basilica in the eighth consistory of his pontificate to bring to today's world the fire of missionary zeal, but also that of the meekness of Jesus. With them, the Sacred College now comprises 226 cardinals of whom there are currently 132 electors in the event of a future conclave.

Commenting on the passage in Luke's gospel in which Jesus says he came "to bring fire to the earth," the pontiff invited us to look at two faces of this fire: "the powerful flame of the Spirit of God, passionate Love that purifies, regenerates and transfigures everything," but also the "meek and hidden" embers beside which he waits for the disciples after the miraculous fishing on the Lake of Galilee recounted in John's gospel.

"The powerful fire," he explained, "is the one that animated the apostle Paul in his tireless service to the Gospel, in his guided missionary 'race,' always pushed forward by the Spirit and the Word. It is also the fire of so many missionaries and missionaries who experienced the tiring and sweet joy of evangelizing, and whose very lives became gospel because they were first and foremost witnesses."

But it is inseparable from the other face of witness, that of magnanimity and meekness: in this regard, the pontiff cited the example of St. Charles de Foucauld, his "remaining for a long time in a non-Christian environment, in the solitude of the desert, focusing everything on presence: the presence of the living Jesus, in the Word and in the Eucharist, and his own fraternal, friendly, charitable presence."

Two faces to cultivate both and on which the pope pointed the new cardinals to two of their predecessors as examples. "A cardinal," Francis said, "loves the Church, always with the same spiritual fire, whether dealing with big issues or dealing with small ones; whether meeting the great of this world or the small ones, who are great before God. I am thinking, for example, of Cardinal Casaroli justly famous for his open gaze to assist, with wise and patient dialogue, the new horizons of Europe after the Cold War. And God forbid that human shortsightedness should again close those horizons that He opened."

Pope Francis continued: "Rather in God's eyes, the visits he regularly made to young inmates in a juvenile prison in Rome, where he was called 'Don Agostino,' are equally valuable."

But in addition to the Vatican secretary of state from the years of dialogue with Eastern Europe, the pontiff also wanted to point to the Vietnamese Cardinal François-Xavier Nguyễn Van Thuân, "called to shepherd the People of God in another crucial scenario of the 20th century, and at the same time animated by the fire of Christ's love to care for the soul of the jailer who stood guard at the door of his cell," as an example.

"Jesus," the pope concluded, addressing the new cardinals, "wants to cast this fire on earth today as well; he wants to light it again on the shores of our daily stories. He calls us by name, looks us in the eyes and asks us: can I count on you?"

Francis then presented the cradinal's red hato or biretta, ring and title to 19 of the 20 new cardinals: one of the cardinals, in fact, Ghanaian Richard Kuuia Baawobr, bishop of Wa, was unable to be present at the ceremony because he was hospitalized due to a health problem that arose after his arrival in Rome.

As many as six Asians are among the new cardinals, all on the electoral roster: they are Korean Lazarus You Heung-sik, prefect of the dicastery for the Clergy and former archbishop of Daejeon, Archbishop Virgilio do Carmo da Silva of Dili in East Timor, the two Indian prelates Filipe Neri António Sebastião do Rosário Ferrão, Archbishop of Goa and Anthony Poola Archbishop of Hyderabad, Singapore Archbishop William Goh Seng Chye, and Italian Giorgio Marengo, Consolata missionary and apostolic prefect of Ulanbaatar in Mongolia.

The latter revealed today that Pope Francis has received an official invitation to visit Mongolia. It was advanced by the official delegation that came from Ulan Batar for the Concistory led by former President Enkhbayar, who delivered a formal message from current President Khürelsükh. "The Pope," recounted newly appointed Cardinal Marengo, "expressed great interest in the proposal and said he intends to make this trip, compatible with his health condition and previous commitments.

Finally, during the Consistory, Pope Francis also approved the proclamation of two new saints - Msgr. Giovanni Battista Scalabrini, bishop of Piacenza, founder of the Congregation of the Missionaries of St. Charles and the Congregation of the Missionary Sisters of St. Charles Borromeo, and Artemide Zatti, an Argentine Salesian layman - setting their canonization for Sunday, Oct. 9, 2022.

The photo of the congregation in this relatively large sanctuary shows that almost every one present is over 40+ years old. Not a young face anywhere! Is this a special Mass for retired people from the city nursing homes?

I presume you are speaking about the masthead photos and not this post. Bluffton, SC is a huge retirement community similar to places in Florida. It is a parish of almost 5,000 households. There are young families here but not at the Vigil Mass. they also have an elementary and high school.