YES, LET’S MAKE SURE THE LAITY RECIEVE BOTH THE CONSECRATED MOST PRECIOUS BODY AND BLOOD OF JESUS UNDER BOTH FORMS, BUT LET’S FOLLOW THE SCIENCE!

Pope Francis offers Holy Communion to a child making her First Holy Communion by doing so in a way that is both hygienic and in no way a cause of spreading deadly epidemics and pandemics. It also places the Latin Rite in continuity with our Eastern Rite brothers and sisters at the time of Holy Communion, it is Holy Communion by intinction with the Consecrated Host and Wine mixed together: 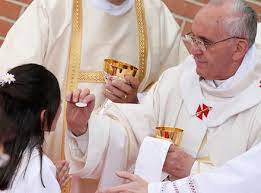 The Jesuit Magazine, America, has an on-line article about the laity returning to receiving both Species of the Most Precious Body and Blood, Soul and Divinity of the Risen Lord, Jesus. You can read it by pressing the title:

It’s time to bring back receiving Communion from the chalice

My scientific comments that are also theologically sound: I have promoted this for years, but not the common chalice. Scientists, but only since Covid-19, have finally caught up to my dire warnings about the common chalice and its potential to spread an epidemic or even a pandemic and thus be deadly to unsuspecting communicants.

The common chalice can be deadly, especially for those with co-morbidities! We learned that during the pandemic too.

So, while the lay person who wrote the America article pleading that parishes return to the epidemic/pandemic spreading common chalice, I way, no, hell no! But intinction, yes!

Intinction would put the Latin Rite Church in line with the Eastern Rites of the Church. When they offer Holy Communion, they offer our Lord under both Forms (Species) but co-mingled, like the water that is placed into the wine prior to its consecration.

Intinction is the way to go. Do I hear an “AMEN?!

"Saying things that don't make sense but pretending they do."

Now you have proven my point for the 5th time.

You prove time and again what John Nolan said about you is true - you are a berk. You never stop taking swipes at your priestly brethren. Why not start your own blog, you mighr get a couple of people to post comments, including yourself

Isn't it cute that TJM thinks he's not a "berk," whatever that may be?

And isn't it cute that TJM thinks that, because he agrees with a post from Fr. ALLAN McDonald, the post, no matter how untrue or contrary to fact it may be, is unassailable?

"Have a potential to..." = has not been shown to do so
The idea that the laity should receive the precious blood is another wacky 70s fad that has no basis in Church teaching or discipline.

But, but, but, the laity receiving the Precious Blood has a 2000 year tradition in the East and 1000 in the west! The East is the most faithful to this tradition and the manner in which it is offered.

You’re a sick excuse for a priest. You definitely belong in NY City

Please, please calm down and be careful.

Most of us here have dealt with disappointing clergy for years. It's a reflection of our age. But it's just NOT worth it to allow it to upset you so. I know you love the Church and hate to see Her assaulted from within, but keep in mind: Insulting, mocking and physically assaulting ordained priests are all forms of sacrilege. Is it unfair that so many ordained clergy hide behind such rules? Maybe, but the rules are rules. Insulting a priest you have problems with might make you feel good for a few minutes, but in the end, it's just not worth it.

"Is it unfair that so many ordained clergy hide behind such rules?"

Jerome, who is hiding? I'm not.

"Most of us here have dealt with disappointing clergy for years."

Jerome, where do you get the idea that clergy are not supposed to "disappoint" you or others? If, by that, you mean we should do and say what you want so that you are not "disappointed," then your expectation, not the behavior of the clergy, is your problem.

Disappointment is a part of everyone's life. The lesson you might learn comes from the Rolling Stones:

I understand your point. But I am fed up to here with an old leftist cleric who comes here to trash our genial host. He rarely contributes anything of value. He should start his own blog

Jerome, allow me to offer a translation of TJM's comment, "He rarely contributes anything of value."

What TJM is saying is "He posts things with which I disagree, often without any basis for doing so."

And when TJM says, "He should start his own blog" what he is saying is, "I don't want to hear anyone who disagrees with me or the people I agree with."

Oh, and when he says, "But I am fed up to here with an old leftist cleric.." he means "I call people old thinking that it is an insult, which is ageism pure and simple." He forgets, it seems, that I am youger than our "genial" blog host...

I hope this helps.

Unfortunately for the churlish Father K, people like Jerome Merwick get you

When we say East, we need to distinguish between the Byzantine Churches, the Syriac Churches and the Thomasine Churches. The latter two use leavened bread (I'm not 100% certain if there's an exception somewhere) and given this, I don't know the prevalence of intinction, or lack thereof. Would need to research.

In the Byzantine Churches, predominantly, the laity receive the body and blood together on a spoon. Since COVID, individual spoons that can be sterilized, or wooden spoons that are then burnt has been the approach to distribution within the Catholic Churches. I believe some/many of the Orthodox Jurisdictions retain the single gold spoon.

Exception: The rubrics for the Divine Liturgy of St. James separates reception to individual species in some of the churches in which it is celebrated. Mostly the Byzantine Orthodox Churches on the Saint's Feast Day in October.

By the way, a subtlety that you may wish to check:

Intinction is the action of dipping the bread in the wine at a Eucharist so that a communicant receives both together.

The method by which the Byzantine Churches, both Catholic and Orthodox, prepare communion for distribution from the chalice has been called mixing. As the precious body has been soaking in the precious blood, this would be beyond intinction which would be a quick introduction by immersion and removal. In other words, we don't have intinction the way it is discussed here, or in any other way that I'm aware of. For purposes of this posting, the chalice being involved is really the only commonality.

Intinction in the Latin Church was reprobated on several occasions during the Middle Ages, since it fails to separate the actions of eating and drinking, explicit in the words of consecration and the rubrics for the priest's communion.

It effectively prevents the laity from receiving in one kind only. The common chalice is at least optional.

On the plus side, it risks making redundant the vast army of (mostly female) extraordinary monsters, which is why most bishops disapprove of intinction. However, the same result is achieved by retaining the traditional practice. Vatican II did not envisage the faithful being offered the chalice at every Mass, but rather on particular occasions, for example the bride and groom at a nuptial Mass.

Anglicans have been receiving from the chalice for over 450 years with no apparent ill effects, and Catholics like me who don't take the chalice are usually motivated by things other than health concerns.