UGH! AT ONE POINT I THOUGHT THAT CARDINAL CUPICH MIGHT BE NAMED THE HEAD OF THE DICASTERY FOR DIVINE WORSHIP--BUT NOW HE IS A PART OF IT; I WONDER IF WE'LL BE GOING BACK TO THE 1980'S STYLE OF MASS AND ARCHITECTURE? 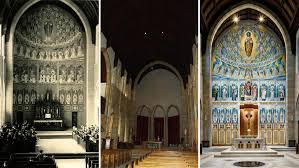 Cardinal Cupich is a 1970/80's trained liturgist. He's not horrible at celebrating the post-antecedent Mass but he certainly was into the deconstruction of the antecedent Mass as symbolized by the 1980's.

His Eminence destroyed the chapel of the Josephinum which has happily been restored.

The seminarians there did not kneel for the Eucharistic Prayer and there was clearly a de-emphasis on the adoration of the Blessed Sacrament and of a central tabernacle, both of which corrupt the true meaning of the Eucharist.

Now that there is a strong desire that the antecedent Mass be suppressed and the laity who love it led to the 1980's again, early 80's at that, will we see more wreckovations, the tabernacle hidden, perpetual and partial perpetual adoration of the Blessed Sacrament suppressed.

Who knows, stranger things have happened and are happening.

Other churchmen named as members of the congregation include the Irish-American Cardinal Kevin Farrell, prefect of the Dicastery for the Laity, the Family, and Life, and the Bronx-born Archbishop Augustine Di Noia, adjunct secretary of the Congregation for the Doctrine of the Faith.

Cupich is hardly a liturgist and his style is banal. He allows liturgical abuses but is Mr. Tough Guy when it comes to faithful EF Catholics

Bank of America names Bonnie and Clyde as President and Vice President of U.S. Operations.

Taking a breath after my initial nausea and disgust with the pope's latest round of promotions, I cannot help but reach these conclusions about the leaders of our Church:

1) THEY HATE REVERENCE
You can rub their noses in the silliness of Novus Ordoism's relentless liturgical abuses. They are incapable of feeling shame and embarrassment and will tolerate ANYTHING except a reverent Mass. May God have mercy on them.

2) THEY LOVE SACRILEGE, ESPECIALLY SACRILEGIOUS COMMUNION
A. How easy is it to get Confession in YOUR parish? How often do you hear the likes of Cupich, McElroy, Farrell, Gregory and the rest of these...ahmem..."prelates" talking about the need for sacramental Confession? How often do they even mention REPENTANCE? We've had poll after poll demonstrating that most Catholics no longer believe in the Real Presence. I think equally chilling would be a poll determining how many Catholics UNDERSTAND that one MUST NEVER RECEIVE COMMUNION UNLESS HE/SHE IS IN A STATE OF GRACE. My money says the majority of Catholics don't even know it, because it is no longer taught.
B. They pal around with pro-abort politicians and Planned Parenthood supporters grinning defiantly, welcoming these kind of people to Communion and feigning hurt and outrage when a real Catholic suggests that they should be denied Communion. THEY ENJOY AND PROMOTE SACRILEGE. May God have mercy on them.

3) THEY HATE CHILDREN
Aside from their sideways support of abortion and pro-aborts, if these people cared one iota about children, they would have enough integrity to resign. Instead, they miseducate the youth. They groom the youth. They abuse and tolerate the abuse of youth. And they feed us this "VIRTUS" B.S., which is just more window-dressing to satisfy the PR demands of their offices, keep the donations coming and ward off lawsuits. May God have mercy on them.

4) THEY HATE THE CHURCH
If it was anything less, they would simply leave it. But no, that's not good enough. They have the colossal effrontery to try to change Jesus Christ's Holy Church into something it has never been and will not rest until they think they have done so. They are ashamed of its past, its heritage, its traditions and everything they say and do betrays that hatred and shame. And very likely one of the main reasons they hate it all so much is because if they confronted the reality of what the Church really is and always has been, it would be too convicting for them to tolerate, given their personal lifestyles. May God have mercy on them.

And may God have mercy on me and all of us. I do not take these assertions lightly. Detraction and calumny are serious sins. But how much longer must we, the laity remain silent while perverts and careerists destroy what generations through prayer, hard work and patience have built? I don't know what form it should take, but we have a responsibility to hold these "men" accountable and stop tolerating their evil.

As I look at this laughable group of "men" who purport to want to lead us on the path to Heaven, I keep thinking of the words of St. Jerome: "It is rare to find a heretic who loves chastity."

It's time for us to stop pretending we don't see the obvious.

And I would also add that they LOVE to see sacrilege mixed with irreverence. The idea of ANYONE receiving Communion on the tongue is offensive to them. They want to see all of the laity casually handling those Consecrated Hosts in their grubby, unconsecrated hands.

They've succeeded, for the most part.