SHOCKING EVIDENCE THAT CARDINAL DESIGNATE, ARCHBISHOP MATTEO ZUPPI IS OPPOSED TO VATICAN II AND DOES NOT FOLLOW ITS TEACHING ON THE BANNING OF LACE ALBS

As everyone knows, especially those who actually have read what Vatican II taught, the documents make specific reference to the banning of lace albs. To wear a lace alb is to oppose Vatican II. Vatican II taught that lace albs are your grandmother’s lace and not to be used in the Mass.

We appreciate all that Vatican II taught. Not only did the documents of Vatican II ban lace albs, along with that specific, Vatican II clearly and directly banned fiddleback vestments, black vestments, stained glass windows, altar railings, attached altars, ad orientem and Latin, especially Latin and Gregorian chant, as well as the traditional sanctuary and altar arrangement.

But the ban on lace and grandmother’s lace in particular, was quite dogmatically and infallibly stated. That anyone some 60 years after Vatican II banned these things, still wear lace is, how shall I say this, so pre-Vatican II. Of course that means that the one doing it is to be mocked, despised, marginalized and bullied. Thank you Vatican II for showing Catholics the proper mentality toward all those pre-Vatican II Catholics with their stupid, stunted and in unenlightened customs.

And Cardinal-designate Zuppi, what would the pope say to him? What slurs can be hurled at him? How can we mock him because as one can see in his grandmother’s lace and nice grandmotherly lace at that? Suffice it to say and this is quite enough, it is quite visibly evident that the good designate is “so pre-Vatican II! That’s enough of an insult, no? (Interesting that the FSSP priests’ albs aren’t as grandmotherly as the soon-to-be cardinal, no? 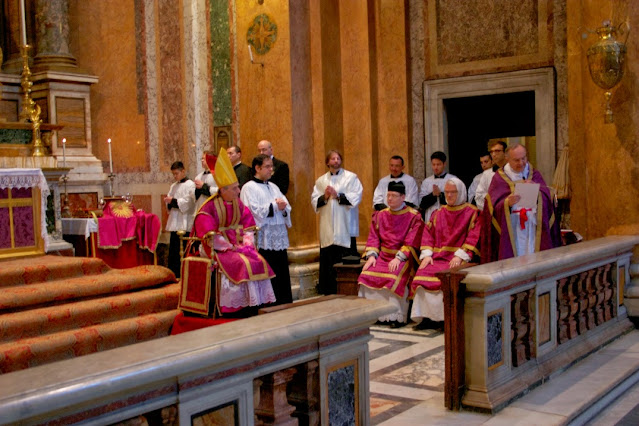 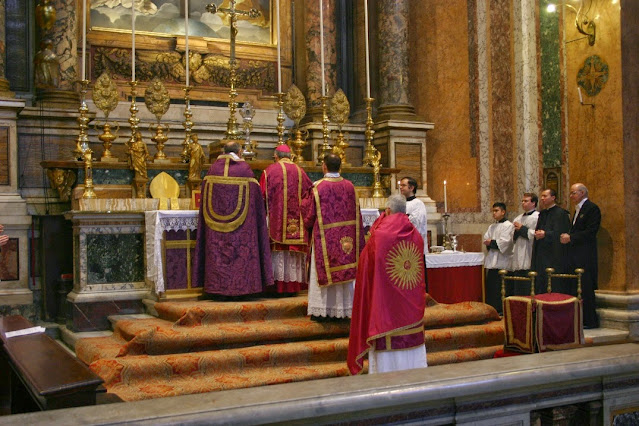 Also, I like this article by a Church of England priest posted on Praytell. But Allen Griffith’s comment is particularly insightful. Yes, this from Praytell:

Pope Francis to Sicilian clerics: Take off your grandmother’s lace.
1

-- New Archbishop of Bologna a friend of the Traditional Mass

"Pope Francis named today as new Archbishop of Bologna Matteo Zuppi, up to now Auxiliary Bishop of Rome. He has been mentioned here in Rorate for his visits to Santissima Trinita dei Pellegrini, the Personal Parish of the Traditional Mass in Rome (run by the Fraternity of St. Peter) - for instance, in 2014 - and his discreet attempts to help the Franciscans of the Immaculate."

-- Rorate Caeli Is In For A Big (And Distressing) Surprise

"Most of the Katholik Krazy blogs are run by white post-menopausal matrons with too much time and too little understanding of our authentic Tradition and consequently are a bit down at the heels when it comes to any theological élan.

"...I got a particular kick out of a Rorate posting by “New Catholic” entitled New Archbishop of Bologna a friend of the Traditional Mass."

“New Catholic” is no different but this time unfamiliarity with Catholicism left egg all over New Catholic’s face and spattered onto the rest of Rorate.

"Despite his having celebrated, as an auxiliary bishop of Rome, the Traditional Latin Mass for the FSSP parish at Santissima Trinita, Archbishop Matteo Zuppi is no friend of neo-traditionalism.

"Quite to the contrary. Don Matteo is a protégé Archbishop Vincenzo Paglia, the President of the Holy See’s Pontifical Council For the Family and a leading architect of the recent Synod and pusher of the “Kasper Agenda.”

"Moreover Archbishop Zuppi has been life-long member of the left-wing Catholic Movement, the Community of Sant’Egidio.

"Sant’Egidio was the main agency behind the Assisi Interfaith meetings which drew Christians, Jews, Buddhists, Muslims, Hindus and others to Assisi in1986 and again in 2002.

"Both theologically and politically it sits on the far left side of the Catholic spectrum.

"So while Archbishop Zuppi may know how to say the TLM he comes from a Church that is thoroughly in the Pope Francis model.

"Good Luck, Rorate with men like Zuppi in key sees, the Church is getting tied in closer and closer to Pope Francis’ vision. Let’s hope he gets to fill a few more sees and leave his stamp on the Church."

As the other blogger identified in 2015 A.D., the problem with "traditionalists" (at least many of them) is that they possess "too little understanding of our authentic Tradition..."

Speaking generally, "traditionalists" believe that their version of "Catholicism" that flows from the TLM will form a person into a rigid, right-wing, religious, political, and economic extremist.

That is the result of the "incomplete and contradictory notion of Tradition" that one encounters often within "traditionalist" circles.

Therefore, it was a given that New Catholic/Rorate Caeli, LifeSite News, as well as additional trads/right-wingers, would explode against Archbishop Zuppi.

Speaking humanly, peace, liturgically, or otherwise, with said folks is all but impossible.

That blogger, in 2015 A.D., had New Catholic/Rorate Caeli, and that ilk, pegged.