CARDINAL DESIGNATE ROCHE LAYS IT OUT, EASTERN RITE CATHOLICS ARE NOT PRACTICING UNITY WITH A DIFFERENT MISSAL USING HIS FLAWED LOGIC…. 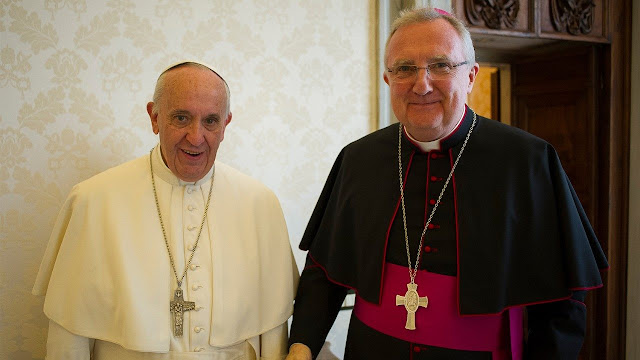 Q: Turning to liturgy and reform. There have been many debates recently about liturgy, particularly the Eucharist. Why, in your view, does something that should unite us continue to be so contentious?

There have been opinions expressed about particular concerns. For example, very shortly after the chalice was withdrawn from Holy Communion for everybody who attended Mass, there was a controversy over that, but there's never been a controversy about the liturgy in the way that we're experiencing it today, partly because there has never before been two versions of the Roman Missal –the Roman Missal from 1962, and then the Roman Missal from 1970, which was produced with the full force of the Second Vatican Council behind it and promulgated by Pope Saint Paul VI.

It's a tragedy that there is this controversy today, the so-called ‘battles’ over liturgy, because the Eucharist is, by its nature, the sacrament that unites the entire church.

And as the Holy Father has pointed out in his Traditionis custodes, there is one liturgical law which assists us in our belief in transmitting the Church's doctrine. So, the reform of the liturgy is really a very important matter today and also not something to be taken as an option.

The But one of the problems, challenges, of our age is the growth in individualism and in relativism, that ‘I prefer this.’ Well, the celebration of the Mass is not something to be a matter of personal choice. We celebrate as a community, as the entire Church and the Church throughout the centuries, as always regulated the form of liturgy that it has come to believe is more pertinent for a particular age.

Father [Jozef Andreas] Jungmann, an Austrian Jesuit who only died at the beginning of this century, was someone who, in his studies, showed how over the centuries the Mass has been changed in this way in order to fit the needs of the day. And the resistance to this is quite a serious matter, which the Pope has pointed out in his document on the liturgy, Traditionis custodes.

So, all that is taking place is the regulation of the former liturgy of 1962 Missal by stopping the promotion of that, because it was clear that the Council, the Bishops of the Council, under the inspiration of the Holy Spirit, were putting forward a new liturgy for the vital life of the Church, for its vitality. And that's really very important. And to resist that is, is something that is really quite serious, too.

Roche is a joke, a cruel joke and a rank opportunist. He was certainly singing a different tune when Pope Benedict was in charge. The OF by its structure promotes disunity. It has chased millions away but “vitality” is just around the corner according to the geriatrics in the hierarchy! I remain Catholic and pray for more tolerant days.

Eastern Catholic Churches, of which the Ruthenian Church is one, are not obligated to practice the so-called unity referenced in the posting title (particularly where self-governing). Churches are distinct from rites, which references liturgical practice. I belong to the Ruthenian Greek Catholic Church, known in the United States as the Byzantine Catholic Church. Here in the United States, were are a metropolitanate Church, are self-governing and we follow the Eastern liturgical tradition/rite (here, the Byzantine tradition as opposed to Assyrian etc.). In other words, "Rite" does not describe the legal structure of an entity.

Please note: The Second Vatican Council encouraged the Eastern Churches which are part of the aggregate Catholic Communion to rediscover and reimplement traditions and practices specific to that particular church. The Byzantine Catholic Church (Ruthenian) has done this such that its practices, today, are mostly indistinguishable from the Orthodox Church from which it originated.

Where does Roche say anything about Eastern Catholic Churches? If he did he should "stay in his own lane" and mind his Latin business.