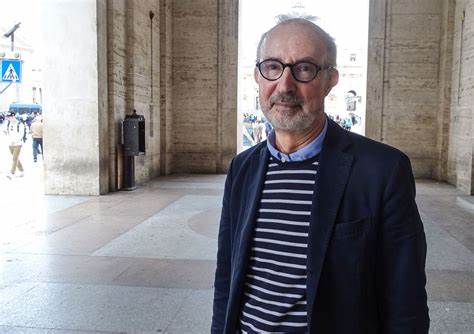 > All the articles of Settimo Cielo in English

If you want to receive (or go back to receiving) a notification for every new article, click HERE and subscribe to the Newsletter from Settimo Cielo!

Among the recent sociological surveys on religions in the world, two are of particular interest. The first registers the sharp setback for Catholicism in Argentina. The second measures the views of Catholics in the United States regarding abortion, just as the supreme court is preparing to overturn the 1973 Roe v. Wade decision that legalized abortion in all states, with the consequence that it will be the individual states that will legislate on the matter.

In Argentina, those “without religion” have come to be 22 percent of the population, when half a century ago they were practically absent. While over the same timespan Catholics have dropped from 90 to 52 percent.

Argentines who say they trust the Catholic Church are also in freefall: from 52 percent in 2017 to 31 percent today. The same goes for Pope Francis’s approval rating, which fell from 62 to 52 percent over the same period.

Conversely, among those who still call themselves Christian there are rising numbers of “evangelicals,” charismatics, and Pentecostals, who in Argentina today make up 12 percent of the population.

In all this Argentina reflects a trend at work for years in the whole of Latin America, where already in 2018 there were at least seven states in which Catholics had fallen below half the population, led by Uruguay, historically the most irreligious, followed by other Central American states.

But today, even in a giant like Brazil Catholics have fallen to less than half. In the state of Rio de Janeiro they are 46 percent, with the lowest troughs, below one third, in the favelas.

Pope Francis dedicated an entire synod to the Amazon in 2019, and a few days ago he appointed as cardinal the bishop of the largest city in the region, Manaus. But while the Church is fighting for the preservation of nature, the number of Catholics is in continual decline. Today they are only 46 percent of the 34 million inhabitants of the Amazon basin.

In Chile as well Catholics have recently dropped below the threshold of half the population. And Argentina, as has been seen, is very close to this, and in addition has been orphaned by its countryman pope, who has never set foot there again since he was elected, nor intends to do so in the future.

IN THE UNITED STATES

As for the views of Catholics in the United States on the subject of abortion, this is set out in a recent survey by the Pew Research Center in Washington:

> Like Americans overall, Catholics vary in their abortion views, with regular Mass attenders most opposed

At the two opposite extremes are those Catholics, 13 percent, who want abortion to be legal in all circumstances, without exception, and those others, 10 percent, who instead want an outright ban, while in between there are those who want it to be either legal or illegal “in most cases.”

Those saying they agree with the statement that “human life begins at conception, so a fetus is a person with rights,” are 44% of Catholics in general but 70% of those who go to Mass every Sunday.

In the United States, the opposition of practicing Catholics to the legalization of abortion, always or in most cases, is very close to the record figure, 77 percent, of white “evangelical” Protestants.

While instead views differ quite a bit among Catholics according to political affiliation, regardless of Mass attendance.

60 percent of Catholics who lean Republican are for making abortion illegal always or in most cases, and 59 percent for the statement that “life begins at conception.”

While 73 percent of Catholics who lean Democrat are for keeping abortion legal, always or in most cases, and just 30 percent for the statement that “life begins at conception.”

The views on abortion of Catholics who lean Republican are very similar to those of non-Catholic Republicans.

In reporting these data, the Pew Research Center leaves out the comparison with previous surveys. But one fact is certain: still today in the United States, Catholics are much more sensitive and responsive to the seriousness of the abortion issue than are the Catholics of Europe.

This news story shows how low and sick the modern Democratic Party has become. A women at a Mass in Michigan stripped and interrupted the priest's sermon to support Roe. If this kind of stuff does not turn Catholics away from the Democratic Party, nothing will:

And another "measured" response from pro abortion protestors:

A neighbor of Supreme Court Justice Brett Kavanaugh says the pro-choice protesters who have marched multiple times a week down their street in the evening have shaken up residents' homes and disrupted their lives – as they detailed the alleged abuse received by neighbors from protesters, while saying authorities have done little to help them.

And Pelosi continues to show her true self - evil!

“For the 3rd time in a week, I’m calling for a vote for stronger security for Supreme Court Justices—ALL of them,” McCarthy said on Twitter. “This isn’t partisan. The threat is real. Why is Speaker Pelosi blocking something that the Senate has already passed unanimously?”

Why are the bishops and priests not condemning her actions?

The linked article is pretty much a retread of the last 30+ years. We are failing because we try to be hip and cool like a tasty cheeseburger. We want to compete with showy Protestant services, or contemplative Buddhist meditation, new age (sic) crystal gazing, or political social programs. That is why we are failing.

Well the House regained its sanity (after checking the polls I am sure) and voted to provide the SC Justices with protection against the Democratic Party’s thugs. On an interesting note, Marie Newman of the Archdiocese of Chicago voted against it. She replaced one of the few remaining pro-life Dems, Congressman Lipinski, whom Pelosi targeted for defeat in the Dem primary a few years back. Although it won’t make a difference I plan to point this out to “Cardinal” Cupich, who was likely thrilled that Newman defeated Lipinski. And they wonder why Catholics are walking away.

Democrats use their position in the House to get what they want (Jan 6th Committee) and they are the devil incarnate.

Republicans use their position in the Senate to get what they wany (blocking Garland's SCOTUS nomination) and they are the cat's meow.

You need to stick with your day job. Jonathan Turley has already pointed out the utter sham that is the Jan 6 Committee. What McConnell did is not an abuse of the process unlike the scurrilous attacks on Justice Kavanaugh launched by your Party. He would have been another pro Roe vote which does not seem to bother you. It tells me all I need to know about your Catholic bona fides. You should find a “Church” that fits your political views.

"Theologian" Nancy Pelosi weighs in on violent threats and actions by her Party's goons "mostly peacefully protesting" the potential reversal of Roe v Wade. Will Cardinal McElroy shrug this off?:

Fire officials say the firebombing caused at least $150,000 worth of damage to the structure, Buffalo News reported.


Pelosi refused to condemn the left-wing terrorism and droned on about how she’s a “very Catholic person” who believes in a woman’s right to choose.

“I’m a very Catholic person and I believe in every woman’s right to make her own decisions,” Pelosi said."

Very "Catholic" indeed. If she begging Archbishop Cordileone to excommunicate her? Is Pope Francis going to condemn these actions?