THIS IS AS IMMORAL AS A FAKE DOCTOR IMPERSONATING A REAL ONE—IT IS IMMORAL AND ALSO A CRIME!

Of course she will be excommunicated for simulating that which isn’t a sacrament, in this case, Holy Orders. But even worse she will be impersonating a priestess which the Catholic Church does not have as Christ did not institute the Order of Priestesses.

But if a person impersonating a cop pulls you over and gives you a ticket, that fake cop commits a crime. This woman gloats over her crime and blasphemes the Holy Spirit by blaming Him.

However, if there were priestesses in the Catholic Church and I was vocation director, I would weed her out with a weed wacker  before you could say lawn mower! How would you like that as your pastoress??? 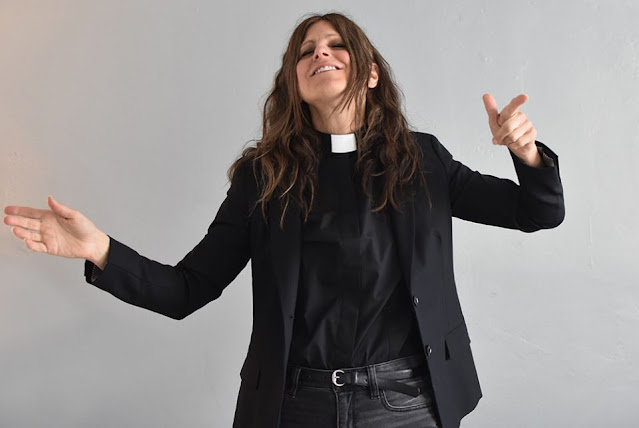 Anne Tropeano has chosen to be ordained as a Roman Catholic priest, thus breaking the Catholic Church's ban on the ordination of women and crossing the threshold of formal excommunication. "God is asking me to do this," she says.

"The prospect of excommunication is painful to Tropeano."

Then, serve in a valid and productive way, perhaps away from the Jesuits.

Let her know that Lithium doesn’t break her fast.

She looks like she's turned up for a 'vicars and tarts' party, combining both roles. However, she's forgotten one item of dress which is de rigueur for wymminpriests in the Anglican communion - the large chunky earrings.

I note the 'ordination' is being hosted by the Episcopal cathedral in Albuquerque and the 'first Mass' will be in a Lutheran church. It's not very ecumenical of 'our separated brethren' to connive in an illegal perversion of Catholic rites, don't you think?

It just goes to show how effective “tea and crumpets” ecumenism has been over the last 50 years. The only thing that has changed is that anti-Catholic sentiments are more sophisticated today in our “separated brethren”.

On a more positive note, the most recent convert to the Ordinariate, Dr Michael Nazir Ali, a former Bishop of Rochester (the see once held by St John Fisher) is from the evangelical wing of the Church of England. His disillusionment with the Church he served stems from its downplaying the Christian message in favour of embracing the latest secular fad, and has nothing to do with the CofE's decision to ordain women, which he supported at the time.

Having been brought up in Pakistan (he and his family gained refuge in England in 1986) he has experienced militant Islam first-hand yet believes in dialogue. His opposition to the modern notion of 'multiculturalism' echoes the teaching of John Paul II and Benedict XVI.

Dr Nazir Ali will be ordained later this month, the highest-profile Anglican prelate to be so since the former Bishop of London, the late Graham Leonard.

She has not been ordained. Stop playing along with the delusional. Love requires an anchor in truth. One cannot love a person and simultaneously support the delusion.

Mark Thomas (whatever happened to him?) had a quasi-Manichaean vision of the Church, with demonically-inspired 'right wingers' and 'left wingers' in opposition to a true Church, presumably with a centrist position.

I have come to the conclusion that the main threat to the Church and to Christianity in general does not come from 'traditionalists' or 'progressives' (however you choose to define these terms) but from what might be called the 'moderate majority'. They represent the triumph of mediocrity. It's manifested in banal and deracinated liturgy, easily understood on a literal level by 'modern man' but utterly devoid of transcendental impact; in a predilection for platitudinous expressions which on closer inspection do not yield much in the way of meaning - 'justice and peace', 'discernment', 'listening Church', 'synodality' - the list keeps on growing; and in a fuzzy relativism (not that its proponents would actually admit to it).

The mediocrats (to coin a word) talk about reaching out to those 'on the margins of society' which includes LGBT people who are not marginalized but aggressively and insolently centre stage. What they choose to ignore is that Christianity itself is on the margins, and as Dr Nazir Ali has pointed out, the gap could well be filled by radical Islam.

This pope has created the papacy of sound bytes and cliches and all vapid and often meaningless but also judgmental of previous papacies and eras in the Church: smell of the sheep; spiritual Alzheimer’s; listening church; the periphery and on and on….

The “moderate majority” continues to shrink. If I live another 20 years probably a majority of Catholic parishes that are open today in the US will be closed. Other than the EF, there are less and less young people engaged in the life of the Church. The banal liturgies and lack of training in the Faith has done their job