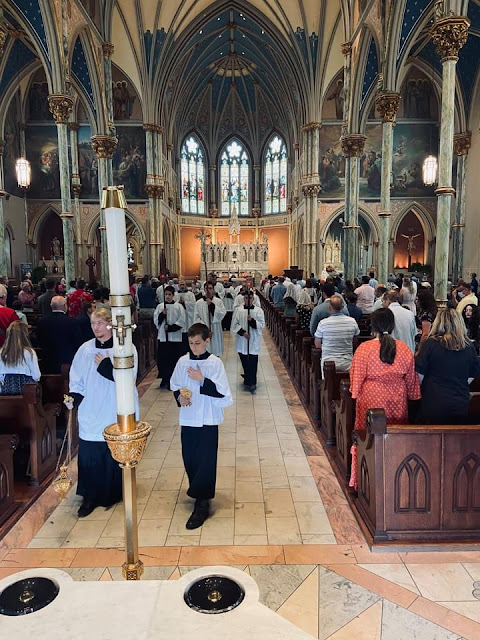 Every parish I have experienced in my nearly 68 years of life had/has active ministries, be it the choir, ushers, women and men’s groups as well as social outreach to the poor. There are also educational ministries, such as schools and religious education.

When the Ancient Order of the Latin Mass was THE Mass, people were integrated into parish life. There were various movements to help those who wanted these such a 3rd Order religious groups, the Legion of Mary and Catholic Action.

There were what were called apostolates (not ministries) that laity could be a part of.

Most parishes today have equivalent ministries but no longer tend to use the word apostolates, which is too bad as apostolate is a more apt name than ministry which implies a certain “clericalization”. I think one could even call those who bring Holy Communion to the home bound or visit hospitals apostolates rather than a ministry, the same with joining choirs, ushers, greeters, lectors and the like.

But what connection do those who attend the Ancient Order of the Latin Mass have today with their parish?

If that had been the case, the majority in attendance would have been parishioners and integrated into parish life as anyone else in the parish, some more, some less.

But when only one parish offers this Mass, the danger is that the many who attend come from other parishes and dioceses who don’t celebrate the older form. They don’t register in the parish where they attend the Ancient TLM.

This past Sunday, I asked those at the Cathedral’s weekly Sunday Ancient TLM to raise their hands if they were tourists or visitors. Of the 200 or so there, about 30 or less raised their hands. The majority there attend the Latin Mass each Sunday.

Of those, since I am not a full time Cathedral priest, I am not sure how many are registered at the Cathedral. But if they are attending each Sunday and live in the Savannah deanery, I think they should be engaged somehow in the parish where they are registered.

That’s the question, how do we keep Catholics who are now marginalized by the pope himself, engaged in the parish life of the Church if the Latin Mass is marginalized to just a few locations.

It is obvious that the Holy Father wasn’t thinking when he issued his nefarious document marginalizing a significant group of Catholics who need to be integrated into the Church and parish life as well as the older order of the Latin Mass.

In this regard, Pope Emeritus Benedict XVI knew what His Holiness was doing.

I continue to be involved in my home parish (St. Joseph, Waycross) where I attend the English NO Mass each Sunday except once a month when I travel to St. Anthony in Ray City to set up the altar and serve Mass in the old Latin form. I serve as a Confirmation I teacher (‘been teaching in PRE for twenty years) and I also continue as a lector and usher in my home parish. I would expect you would hear the same or similar from most who attend the Latin Mass at Ray City. We are extremely grateful to our bishop for continuing to allow us the monthly TLM. On the remaining weekends (which is most of the time) most of us are attending at our home parishes.

"That’s the question, how do we keep Catholics who are now marginalized by the pope himself, engaged in the parish life of the Church if the Latin Mass is marginalized to just a few locations."

By doing that which many have, and will continue being resistant towards: "say the black, do the red".

I think the TLM is a treasure - "Save your people, O Lord, and bless your inheritance". The aforementioned is a reference to the eucharist, "holy things for holy people". I think, however, we can hijack it to more broadly reference our Catholic cultural and spiritual inheritance within the Roman Church. The NO should have been without exception contiguous with the older books. It should not have become radicalized such that the average, innocent lay person cannot recognize it as authentic and feel, therefore, compelled to seek that authenticity elsewhere.

The Vatican in the late 60's and 70's until Pope St. John Paul II allowed for and encouraged experimentation with the Roman Missal especially as it concerns inculturation and the selection of music.

It went very quickly to being celebrated casually, without proper vestments and in a variety of places other than a church that allowed for more "flexibility" rather than rigidity.

By the late 70's in my seminary, there continued to be all kinds of experimentation to include daily Mass in priest's apartments in the seminary which meant Mass was on a coffee table and the priest wore no vestments not even an alb. One such Mass I attended was celebrated on the floor with a blanket as an altar cloth and we sat "Native American" style and the priest gave us the bread and wine as he was consecrating it, meaning he passed it to each of us. There was no consecrated elements after this "Holy Communion" to conclude his made-up Eucharistic Prayer.

If you opposed this kind of stuff, the seminary staff thought you to be too rigid for the priesthood. Guess who is still stuck in this 1970's expression of rigidity?

I get it, Fr. I'm old enough that I experienced some of the nuttiness of the '70s and the aftershocks that reverberated probably well into the '90s. It's engrained and generational at this point. Habits are modified, rarely broken. All that aside, if something isn't done, the whole thing will end up circling the drain at some point. Many bishops are ineffective, or quasi-pawns of the local government, seminaries are somewhat empty. Ireland has 4 seminarians, total, I saw somewhere in the last few days. Protestantism is exploding in Central/S. America home of HH, of all places! Orthodoxy, to a lesser extent, is making impressive inroads in that region as well. Thank goodness, at least their valid. My point? Is "say the red, do the black" so unreasonable to try to hold things together? It's like a badge of honor to thumb your nose at it while wearing ugly vestments, dancing to kitschy muzak down the aisle to your totally off center sanctuary then making the words of institution more "meaningful" by adding your own spin. Any other institution would fall apart/collapse if they did the same. Amazing that it has taken this one 50+ years to see the beginnings of this collapse.

Yet PF is on a mission to punish the most faithful of Catholics - the EF attendees. He should be embracing them.

For the last fifty years I have not identified with a particular parish and it is liberating. Territorial parishes were set up in the 19th century and demographic changes, plus the invention of the motor car, have made the whole idea more or less redundant.

Excessive parochialism militates against the idea of a universal Church, and too many parishes are effectively run by an elitist clique of middle-class busybodies, usually of a liberal persuasion. The idea of a parish priest having to defer to a 'liturgy committee' whose main qualification would appear to consist in knowing next to nothing about liturgy, is ludicrous.