ON SYNODS, CONSULTATION AND LISTENING—IS IT THERAPEUTIC AND BENEFICIAL? 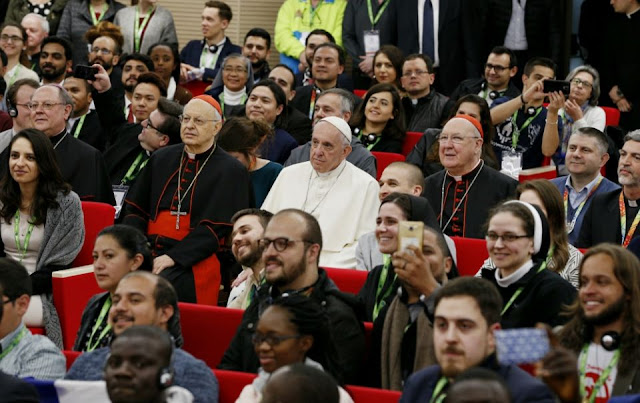 When I was in college contemplating a priestly vocation, Bishop Raymond Lessard had a listening session with my home parish in Augusta, St. Joseph Church, about the qualities of the next pastor he would appoint as our pastor, Fr. Andrew Doris, was about to retire.

I went to that meeting and there were a goodly number of parishioners there. Bishop Lessard seem to listen to all the advise that was given him. Back then, though, the laity who like consultation and pastoral councils wanted these to be more like a parliament rather than a consultative body which these are.

I can’t remember the specifics of the meeting but of course the qualities that people wanted in their new pastor was Superman. Someone who could play football with the kids, loved art and the liturgy and could inspire the parishioners with his preaching ability, down to earth and able to visit each parishioner everyday. Or something like that.

The next pastor had none of that but he was a good man although somewhat eccentric. God rest his soul.

I like listening and I don’t recall ever rejecting a decision of the pastoral council.

I have taken surveys of parishioners over the years. I have not found these to be very helpful and sometimes the answers collected were mean-spirited.

The most contentious issue I faced over the years concern the liturgy and more specifically the type of music. Some want a folk Mass or what today would be called “worship and praise” music, that vapid, emotional sentimentality that gets your hormones moving. They think this will help us to compete with the non-denoninationals which have attracted so many disaffected Catholics.

The older crowd formed by the heady days of the 60’s and 70’s want a return to that time and want nothing to do with Latin, chant, bells and smells. They want casual liturgies that are horizontal with holding hands during the Our Father.

With a pope who decries rigidity, which really means holding steadfast to doctrine, what will the listening of the synod accomplish?

Will all the listening lead to a vacuum of leadership and more confusion which this papacy has produced since the first synod?

Yes, history will repeat itself and at the end the pope will be mad because he’ll have to have another synod on how to prepare for synods and how to think about synods.

As an observation, listening sessions can backfire by making the group believe they are psrt of the decision process. In the case of the pastor of your memory who was nothing like the inputted list of characteristics given to Bishop Lessard, it is likely he was either already chosen or on a very short list. The good Bishop may have collected the information to share with the new pastor so as to prepare him.

Likewise, the hierarchy seem to be playing a passive aggressive game with Catholics by insinuating changes can be made democratically. Furthermore, I think Pope Francis allows people to posit ideas contrary to Church teaching for broader argument with, perhaps, the belief that if we think through the question that we will end up concluding God is right. That is, in my opinion, a seriously naive and dangerous method.

The Pope listens to those who already agree with him and ridicules those who don't. How he dresses that up really makes no difference.

It is not the way Jesus Christ taught. He did not invite the High Priest of Israel to debate the "issues". No thesis, anti-thesis. No synthesis either. Just the Truth. The evangelists and the Church Fathers left us a record.

Later synods and councils tried to pass on this inheritance. Sometimes successfully but mostly not without making things less clear even controversial. The German synod we see today is just an unmitigated disaster.

At V-1 the Pope was given a special mandate to teach the Truth, imitate Christ. Synods, as currently conceived, are not designed to do that, quite the opposite actually. The instigators of this affair may not all have heretical intentions yet the process is likely to leave us not better but worse off at the end.