THE NEARLY 1,500 YEARS OF ANTIQUITY OF THE ANCIENT ORDER OF THE LATIN MASS 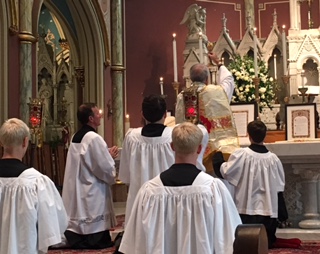 They are as dogmatic about this as liturgical historians were dogmatic about Mass facing the congregation from the earliest centuries which has since then been debunked. Mass ad orientem occurred very early in Church history both in the East and the West.

They also make silly comparisons between vocal responses of the laity, and early on in the west, certainly, like the east, chanted in some places but not in other places. They make inane statements about Holy Communion in the hand, which had a brief history to it and not anything like the recent tradition of receiving in the hand, which the Episcopalians actually have right.

I was clairvoyant about the pandemic producing common chalice as the west now promotes Communion under both forms. But in the East, there is no receiving Holy Communion in the hand and no extraordinary ministers of Holy Communion and the laity do receive both forms and normally by the priest with the use of a spoon and careful not to touch the mouth of the communicant who holds a kind of purificator under his chin as not to spill the Sacred Species.

However, the academics at Praytell miss the point entirely about the antiquity of the Ancient Order of the Latin Mass.

It has nothing to do with the various prayers associated with it which certainly developed and changed over the years prior to Trent standardizing the Roman Missal of the Latin Rite. It has nothing to do with the laity either chanting or not chanting some of their parts or the manner in which the Precious Blood is given or not given to the laity and the means by which this does or does not occur.

It has to do with the spiritual and liturgical ethos of the Ancient Order of the Latin Mass which is very much in continuity with the Divine Liturgy of the Eastern Churches (and the East with multiple traditions that developed). And that ethos is vertical, transcendent and mystical. It is a foretaste on earth of the heavenly vision as the cultures of the east and west understood it and captured it within their own cultural milieu.

The Mass created after Vatican II and within the ideology of rupture, eradicated its inherited traditions and culture. It eradicated the ancient tradition of reverence and piety as well. The East did not do this even though I am sure prayers changed as did other things over the centuries, but the Eastern Rite and the Orthodox have maintained their ancient ethos and order. The west has not.

John, you posted this on the wrong post I think, so I post it for you here:

John commented on "I AM UNCOMFORTABLE WITH ELIZABETH'S SCALIA'S RECOMMENDATION"
8 mins ago
The direction of the preternatural debates at PrayTell and other similar forums has the purpose of making faith in Jesus Christ and men's relation to the Creator a small matter in the big scheme of things. It is a chance for the devil and his sypathizers to gloat over their fleeting success to mislead countless souls.