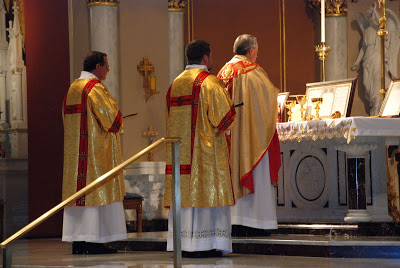 If a future pope rolled back the 20th century liturgical reforms, would they allow pluralism for the reformed rites?
Since I have been banned from posting comments at Praytell, because I make so much good sense that offends their open mindedness except you, you know, when they aren't, I'll have to answer Jonathan Day's thought provoking post at Praytell, here.
I have consistently held that both forms of the Mass should coexist and where there are multiple Masses in a parish at least one should be offered in the "unreformed" Rite and the other saraments if requested.
No future pope will abrogate the latest incarnation of the 1970's Roman Missal. He might reform it to be more like the unreformed Mass and then abbrogate the 1970's and 1962 Roman Missals, who knows?
But if the 1962 Missal were to return as the Ordinary, normal rite of the Church, certainly the 1970's Roman Missal should be allowed in an "extraordinary" way and in parishes with multiple Masses, at least one 1970's Roman Missal should be allowed and the other sacraments for those who request it.
Of course, if the priest himself doesn't want to celebrate the 1970's Roman Missal, he should find someone who will assist him in providing it even if only once a month and at an odd hour.
Certainly, though, those orders that specialize in the 1970's Roman Missal should be allowed to establish parishes or mission that cater exclusively to it, perhaps buy old closed 1970's churches and reopening them or purchasing a beautiful closed gothic or Romanesque church and Wreckovating it for their new mission. But it should be allowed as some dioceses allow FSSP and other like them to run parishes.
s
Posted by Fr. Allan J. McDonald at Saturday, October 23, 2021

What does it mean to "reform" something?

The first definition in an online dictionary tell us this:

"make changes in (something, typically a social, political, or economic institution or practice) in order to improve it."

If that is true, then just WHAT was reformed by the Novus Ordo? More specifically, what parts of the Mass were improved?

Having looked at the prayers and ritual for both "forms" extensively, I'm still at a loss on that last question. Maybe somebody smarter than me or with a broader vision can open my eyes...?

I assume Mr. Day acts in good faith, but here's the thing. Only a few adherents to the traditional form of the Mass have insisted on the Missal of 1970 being extirpated. So the question he poses is manipulative: it assumes something is afoot that cannot be demonstrated by actual evidence. This is a nice trick and often works. Again, it may be that Mr. Day believes there is more of a push to wipe away the 1970 Missal than there is. Produce evidence.

That said, I will take it a step further. Even if there were a movement to wipe away the 1970 Missal, that is not the same thing as the elimination of the traditional Mass. The comparison is laughable.

For one, those who make the 1970 Missal their north star can't seem to agree on a narrative. Is the 1970 Missal a radical departure from what went before, or is it a modest development of the Mass of the ages?

When Pope Francis and others term the old Mass a different rite, that asserts the former, and it agrees with the more vociferous critics of the 1970 Missal. Those of us who have tried to be sensibly moderate are left without a leg to stand on.

Back in the 70s and 80s, it was very common to describe Vatican II as resulting in a "new" Church, both by those gleeful to consign the "old" Church to the history books, and also those who denounced Vatican II for this very reason. My answer -- when I got to the seminary in the late 90s and encountered this account of things in an instructor, was to say that either there is ONE Church or there is NO Church; there cannot be "two," i.e., before and after. It's one or none. And that was Benedict's reason for pushing back against the "hermeneutic of rupture."

Well, now we're back to the "hermeneutic of rupture," and the "progressives" who push it are playing a dangerous game. They risk not only discrediting the 1970 Missal, but even Vatican II. Remember: insofar as Vatican II did not change any doctrine, then it remains infallible; but the charism of infallibility does not protect from making prudential mistakes. So for the pope, so for the college of bishops, right? Is this not true when a council meets? Or do we have a new doctrine that when an ecumenical council meets, it is not only infallible but inerrant?

Second point about the 1970 Missal. Even with the more generous and irenic view that it is an organic expression, the facts are indisputable that it was the result of a frenetic (as the church measures time) bit of cut-and-paste by a tiny group of well connected people. This is far from how the Mass has developed and changed over the centuries, and no, Pius V's supression of newer variations on the Mass, post-Trent, does not contradict this.

Truthfully, the most you can really assert without fear of contradiction about the 1970 Missal is that it is valid, it is licit, and it does reflect at least some of what Vatican II called for: there is simplification -- if not something well beyond that, tending toward mutilation -- of the prior form. There is the allowance of the vernacular as opposed to the effective mandate of it, to the extirpation of Latin. There is greater use of Scripture: again, perhaps well beyond what is prudent. Less than what we got would have satisfied the "more" that VII called for.

The hard truth is that no one can state, definitively, that the Missal of 1970 "got it right." As Mr. Day concedes, it is not irreformable. Evidence mounts that it may have rather badly gotten it wrong, although correlation is not causation: that the Church has suffered grievous wounds in the years since Vatican II and the new Mass does not demostrate that's why the Church suffers so badly. It is certainly possible the Church would be even worse off had there never been Vatican II or the new Mass, as hard as that is for many to imagine.

All one can firmly say is that lots of people (bishops, priests, and well-wired-in laypeople) did a lot of destructive things after Vatican II, in the name of Vatican II and it's misbegotten "Spirit," and this went on for quite a while as normal until it became unbearable, and now the pretense is, "we don't know what you're talking about. There were never any significant abuses in the Mass. There was never an abandonment of catechesis and devotions. Oceania has always been at war with East Asia."

Obviously there are people who would ask for what Mr. Day fears, and as it happens, the very actions of the "party" to which he seems to attach himself -- the PrayTell gang as an example -- actually makes that fear more likely. Many of us tried to advance a "reform of the reform." Explicitly this was NOT anti-1970 Missal, it was PRO; it was aimed at acheiving what seemed to be the best expression of Vatican II.

Guess who has been the most antagonistic toward the "Reform of the Reform"? An odd-couple marriage of TLM-only advocates and so-called "progressives," such as Father Anthony, and Ms. Ferrone, who to this day validate the most extreme attacks on Vatican II. They agree with them that Vatican II certainly did intend all that came after, and the Missal of 1970 is not flawed at all, and they claim the amorphous "Spirit of Vatican II" as authentic, and inspired by that spirit, prophesy that far more ought to follow; the revolution in the Church has only just begun!

Anyway, that's enough from me.

What Jonathan Day does not express is how the 1962 Roman Missal and the other sacraments’ liturgical books were dumped almost overnight after Vatican II beginnng in 1964-65. And this was done by the pope in the most triumphalistic, pre-Vatican II, top down, authoritarian way possible. There were no listening sessions about how to reform the Mass or if rank and file Catholics even wanted it in 1965. And when Catholics complained about the reforms going wild in the late 60’s and 70’s the clericalism in the hierarchy and lowerarchy dismissed them and marginalized them.

That’s an untold history and no one has written it and what the immediate changes after Vatican II opened which led to both progressives and traditionalists become alienated and quite quickly with ramifications for generations of Catholics to come being more and more disengaged from a Church that abandoned its tradition and imposed new and improved upon them in the most academic clericalist way.

I attended Holy Mass at a neighboring parish this morning. Arriving early, I spent some time in the out-of-the-way closet where the Blessed Sacrament is now permanently reserved.  The honky tonk pianist was greeting new arrivals with the mellifluous strains of ''In the Sweet By 'n By''.  I prayed aloud -- ''i hate to break it to you like this, dear Jesus, but this ain't your church no more.''


The question I have is whether the Church is in worse shape now than at any time before Vatican II? It seems to me that from a liturgical standpoint the question is unequivocally no. But, from an administrative corruption standpoint or a dogmatic standpoint there were likely worse periods? Maybe Francis is leading us to a dogmatic crisis that might settle things in a tragically explosive divisive manner. The good news is that nature does show us that a forest fire does serve a purpose.

It would be wonderful to have a rebirth in the Church that starts with reverential liturgy that then leads to a broader cultural revival so that the devil captures fewer souls. I think this is our ultimate desire and dream. There are many who want this but regrettably I think the number is too small in order to make it happen. Sin has yet to cause the maximum amount of misery; we still haven’t had enough.

Many people were impatient with the John Paul II papacy because corrective action didn’t happen fast enough. But as a friend of mine explained to me that John Paul’s papacy was a dogmatic one not a liturgical one. After 8 and 1/2 years of Francis, we might be right back to having to put a stake through the heart of doctrinal falsification before we can hope to rehabilitate liturgy. Hopefully a multifront war can be conducted and people are ready for faster action after the smoke settles from whatever else Francis has up his sleeve.

Father McDonald, you should wear the ostracization from Pray Tell as a badge of honor. Rarely do you run across a group of ne’er-do-wells with higher opinions of themselves than at that Land for Misfit Toys.

I meant an unequivocal YES.

I got banned from PrayTell ages ago.