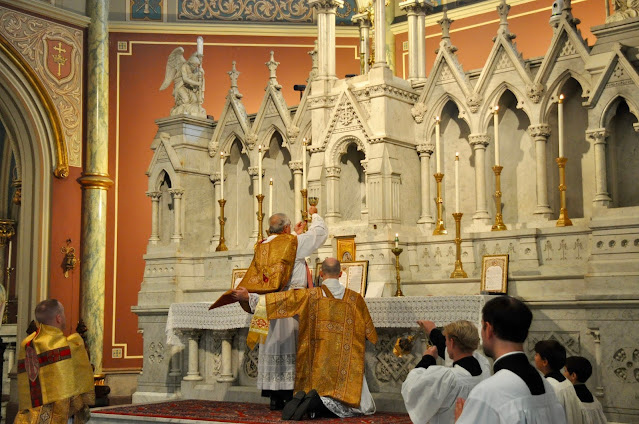 I was having a discussion recently about the Pope's confused document that seems to want to suppress the older form of the Mass. But recently, the Holy Father and his delegate to the USA, the papal nuncio are indicating that bishops should take more responsibility in guiding the use of the older form and the faithful who attend--that's a healthy development and wise that so many bishops, but not all, have been slow in making decisions about the future of this Mass in their dioceses.

The premise of our discussion, though, was based more upon the suppression of the EF Mass and what to do in that case. My suggestion was to celebrate the newer form of the Order of the Mass ad orientem, with all the proper chants and to make it appear as close as possible to the older form.

The person with whom I was having the discussion said, no way. The older form of the Mass is more reverent in terms of what is required for the priest rubricly. He was speaking about all the bows and genuflections, the manner in which the priest holds his hands and especially after the consecration.

He has a point.

But there is the little issue of "ecclesiology" which of course we don't worship at Mass nor do we worship Vatican II and the synodal church and all the rest of the distractions foisted on Catholics since 1965 to the point that the majority of Catholics no longer participate in any form of the Mass because they don't go!

But with that said, can't we just revised how the Liturgy of the Word is celebrated in the EF (apart from the Solemn Sung Mass with deacon and subdeacon)?

Why not make it like the OF's Liturgy of the word--at the ambo, with the priest sitting while the Epistle and Gradual/Tract is either read or sung by an installed lector according to the new norms Pope Francis has established. And the Gospel is read from the same ambo.

And let's allow installed acolytes to assist in serving the altar and helping with the distribution of Holy Communion (at the altar railing you only need the priest and one other priest or a deacon or if he is absent an acolyte).

No other changes, except maybe allowing a deacon to function at the normal low and high Mass.

I apologize for being dense: why?

The older rite(s) cannot be suppressed (the experience of the last half-century and the clear teaching of recent popes have confirmed this) so 'improving' the way the Novus Ordo is celebrated should not wait on something which won't happen.

The current norm for Solemn (OF) Mass at the Oxford Oratory is achieved without changing anything in the text and rubrics of MR3. Regarding gestures and posture, GIRM 42 states 'attention should be paid to what is determined by this General Instruction and the traditional practice of the Roman Rite'. Falling back on 'traditional practice' is not exercising 'private inclination and arbitrary choice' which is disapproved of; indeed it militates against those tendencies.

The church was built in the 19th century for the Jesuits (Gerard Manley Hopkins was curate for a time) but has been in the hands of the Oratorians for thirty years, in which time they have increased attendance five-fold. The altar was previously detached from the reredos but celebration is now facing liturgical east (geographical west). There is no ambo (the original pulpit in the nave is used for preaching) but there are two simple lecterns (one on each side) for the Scripture readings to be proclaimed facing the people. The first reading is done by the MC, the epistle by the subdeacon, and the gospel by the deacon (sung on major feasts). Apart from the three readings, everything is in Latin. Less solemn celebrations are of course in English, apart from the Low EF Mass on Sundays and Holy Days.

The Mass is preceded by the old Asperges rite. All the Propers are sung according to the Graduale (the Offertory usually in a polyphonic setting) and there is usually a polyphonic Ordinary (but with Credo I or III). No 'bidding prayers' or offertory procession. Roman Canon invariably. A simple plainchant Agnus Dei, the polyphonic Agnus sung during the people's Communion. No congregational 'sign of peace'. Communion kneeling at the rail, in one kind, with the option of receiving in the hand. A hymn after the Ite Missa Est.

Incensation of the altar is right-left-right, genuflecting when passing in front of the tabernacle. Bows at the traditional places. Celebrant conjoins thumb and forefinger after the Consecration.

There is a professional mixed choir, enough clergy to fill the roles in the sanctuary, and no EMHC and female servers. But, mutatis mutandis, such a celebration is not beyond most parishes. Most importantly, it is done according to the book with no unauthorized changes.

I'm not sure from your post whether you're talking about improving the OF or seeking permission to tinker with the EF as was done in 1965 and proved to be the thin end of an extremely disruptive wedge.