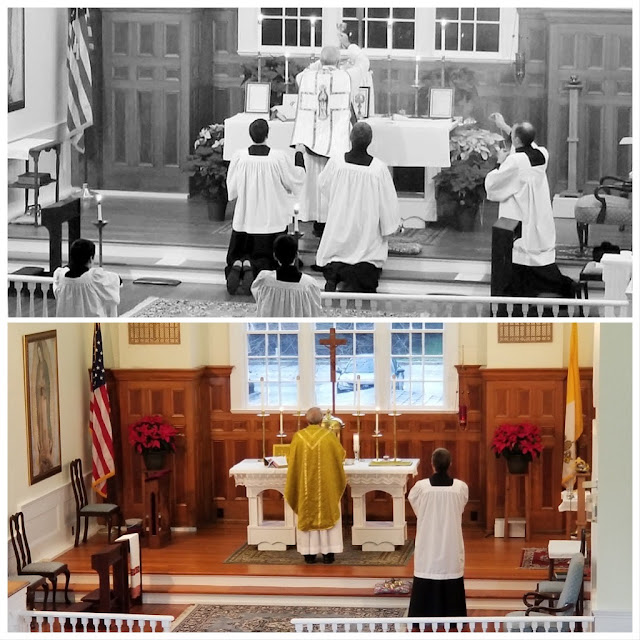 We've discussed this before but now there is a greater urgency to do what Joseph Johnson suggests in a comment on another post.

Here is what he said and my response:

Ad orientem is possible. Kneeling for Holy Communion  is allowed. Chanting the Propers in Latin as it would be in the EF Mass can be done. At least in the OF you could celebrate a primarily Latin Mass for all the fixed parts and the changing parts chanted in the vernacular. The Roman Canon could be the exclusive canon if one so desired.

I'll leave it to others to decide the licitity of these customary acts, but when I was in the seminary, there were priests who refused genuflections, others perfectly capable of a good genuflection choosing to bow instead and one who would not genuflect until after the Great Amen.

And of course we all know that so many ad lib during the Mass and change the vernacular words to suit their own narcissism.

Don't forget the use of the Communion paten by the altar servers at Communion along with the more careful TLM practices in handling the Blessed Sacrament.

Also, there is no reason why a priest who has older style vestments (which are suitable for the TLM) cannot use them in the NO (OK, maybe he shouldn't cross his stole or wear the maniple). When I served the NO Mass as boy in the 1970's, we always used Communion patens, the chalice veil and burse and the ciborium had a matching veil for the lid. We also veiled the tabernacle (or the tabernacle door). I also see no reason why a priest could not use the biretta just as he would use it in the TLM. As far as I know, these are all legitimate options for the NO.

Of course, I say all this still desiring that the TLM continue to be available and that, hopefully, there will be no reduction in the already established locations or frequency of the TLM in our diocese.

That is what was reported, but I can tell you that reasons for anyone being sent off for psychology therapy in a residential program are highly confidential. Thus I would not be going out on a limb to say there more to this than is reported by ideologues.

This is a must read on how a truly liberal and charitable bishop is implementing TC: