JUST HOW CAN THE LITURGY OF THE AGES, YES THE ORDINARY FORM, BE IMPROVED? 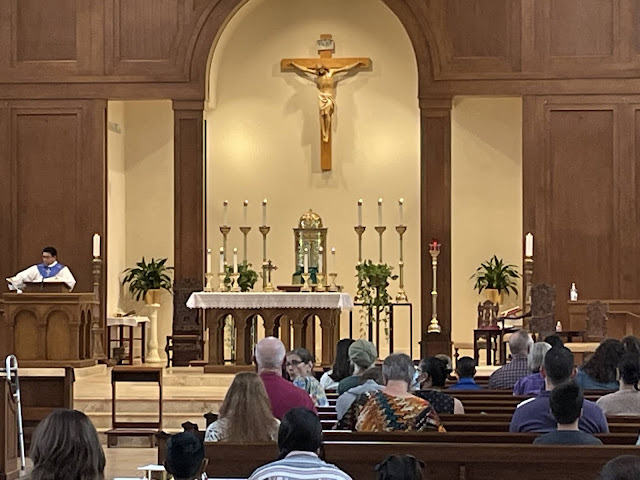 I once heard someone say to his bishop and the bishop listened, that he preferred the EF Mass over an OF Mass celebrated with an EF ethos. By that he meant all the bows and genuflections and kisses of the altar, the antiquity of the EF Mass, its lectionary and predictability when chanted or simply spoken.

Maybe that was a bit of hyperbole on his part, but he did describe to the bishop and the bishop listened that he attends two Masses each Sunday, an ordinary form one with his mom and an EF one at his local cathedral.

He described the kitschy music at his mom’s Mass, with guitar and things I had not heard since the 1980’s.  What he described was truly horrible, like a Rocky Horror Movie Show.

Then he described the Chants from the young schola at his local cathedral.

I thought he was a bit over the top, but he had his points. The OF Mass is like a box of chocolates, you never know what you are going to get and usually you taste it and put it back in the box discovering what you bit into was just plain yucky.

But all of these things need to be instituted, mandated and required. Why aren’t these for the Ordinary Form? Is sloppy, casual and a lack of attention to detail built into the Ordinary Form where no one cares?

There is absolutely nothing wrong with what you propose.The problem is that it is but one of the many options in the O.F. A Form so porous it can be said almost exactly like a Protestant Communion service,or an E.F. High Mass.THAT is the issue.

A nice fairy tale. But we all know that bishops don't listen to parishioners unless the comment is accompanied by a big check (emphasis on "big") or threat of a lawsuit.

Yes indeed the porous nature of the EF is the issue. What I am suggesting for the future pope is to tighten the rubrics and General Instruction and make it more rigid. I know, I know, rigidity is the only mortal sin this pope judges and marginalizes to the peripheries those he judges as guilty including that nasty pre Vatican II rigid liturgy which produces orthodox, I mean, rigid Catholics.

Porous nature of the OF, not EF…

...ad orientem...the proper chants for the Mass in terms of the Introit, Offertory and Communion Antiphon...tasteful but beautiful, nobly simple vestments and altar linen that aren’t minimalistic, but are clean, starched and altar servers in nice, clean cassocks and surplices?

But none of these things are mandated for the EF Mass either. You can actually celebrate the EF versus populum (as was done in the Roman basilica's prior tot he Council). You can set the text of the propers to tunes by Marty Haugen or David-he-who-must-not-be-named-Haas. You can wear a 1970s vintage lime green polyester chasuble. You can have servers in rumpled, dirty vestments. You don't have these things because because they are mandated, but because the EF is in the hands of liturgy aficionados who are fleeing such things.

I guarantee you that if you could wave magic wand and require everyone to use the EF, there would still be sloppy, ugly, trite, banal, etc. liturgy.

Yes indeed and that began to happen almost immediately in the 1965 Liturgy. Elvis Presley’s movie, “A Change of Habit” shows that Mass with him singing at it and it appears to be an actual 1965 Missal Mass of that period when the movie was filmed. It also captures the sentiments of two older women in the congregation puzzled by what as happening.

So, most people attending EF Masses do so to avoid the faithless, secular catholic crowd at the OF happenings? If so, the EF Mass must be the Remnant?

I see you are a professor at a Jesuit institution. Thanks for repeating the company line.

I think the idea that it doesn't matter if you reform the OF because you'll still have liturgical abuse misses the point. Father McDonald asked how to improve things, not how do we impose perfection. We want more good and less bad and that's not aiming too high.

I trust priests like Father McDonald and Father Fox to reform the Mass and I think their product would be a huge step forward in making Mass a reverential prayer. Too bad I can't get my wish and we are stuck with the existing process that is in the wrong hands.

The word is reverence not rigidity. You need the first and then you do the second to get compliance. It's interesting how the Catholic traditionalists are supposedly the mean guys but all of the canceled priests in the past ten years are victims of the leftists. After reform is complete you take a page from the leftist playbook and you'll less rogue practitioners out there.

I'm to the point that the only workable improvement is to trash the abomination and start over.
Direct translation of the EF and then simplify some of it, readings in english maybe even the new calendar three year rotation, the return of holy days to their rightful places and turning to god at the altar. Oh and communion on the tongue while kneeling.
And someone get Francis to shut up
https://newsfinale.com/news/pope-francis-compares-george-floyd-to-biblical-good-samaritan-praises-blm-rioters-for-being-social-poets/
and he is such an expert on environment and economics. He needs to talk about God Christ and the saving of souls instead of acting like the CEO of a NGO.
And he had to love him some pelosi, she should have left in tears
Rant over

Egyptian, that seems like a workable solution except for the translation part. There is a story that P JPII, a polyglot, saw several vernaculars on display and was affronted by the various inaccuracies. My pedantic grandfather would go on at length explaining the meanings such that I concluded an acceptable vernacular would be too long and still not quite right. Translation and interpretation are good topics for homilies; and that keeps politics to a minimum.

well then at least settle on ONE translation and only one, no list of options, just leads to improvisation, Say the black and do the red, NO ad lib