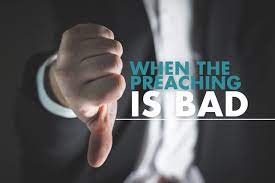 And now history is repeating itself as we revisit the 1960’s and 70’s with its self-referential way of doing things. But Vatican II is replaced with a word that doesn’t exist, synodality.

And synodality is idolatry too when that is the focus rather than Jesus Christ. I link a homily given this past Sunday at St. John Abby in Minnesota. The young priest talks for way to long on the fact that synodality is a word that does not capture the Catholic imagination and doesn’t exist.

I read the homily and it is crap. It is so secular, self-referential, which is another word for horizontal, that it made me sick to read it. Jesus was mentioned once I think and in the context of the disciples on the road to Emmaus  and then get this, which was synodal. Really? Wow is all I can say.

I refuse to preach on synodality and will try to refocus my attention on Jesus Christ. I am sick of this idolatry on synodality, ecclesiology, and discernment. Christianity isn’t a sociology course, a biology course and Jesus and His Church don’t need to be dissected and analyzed. Press the title for the homily. The only good thing about it appears to me that it is short.

This is the homily delivered in Saint John’s Abbey Church on Sunday, October 18 by Fr. Lew Grobe, OSB. At the direction of Bishop Donald Kettler, the Mass was for the Synod on Synodality, with special readings including the Emmaus story.

Surprisingly, I think you are being a bit harsh on this poor young priest, Father. He's probably just a new "company man" trying to say what his superiors want to hear from him.

That said, all the buzzwords, "encounter" (sounds like something from the Esalen Institute) "collaborative" (Who did Jesus collaborate with when He instructed His disciples?) and all this "dialogue" (yes, Jesus listened to the concerns of the two men on the road to Emmaus, THEN HE SET THEM STRAIGHT)--all of these buzzwords ARE just regurgitated 60's & 70's post-Vatican II claptrap. For all this "collaboration" I can't help but think that Bergoglio and his insider group already have a predetermined outcome scripted and ready to go. The entire "listening sessions" show is just inclusive theater.

Picture this: A Church that gradually turns away from its mission for about 60 years and stops catechizing its faithful to the point where the majority of them reject some of the Church's foundational teachings and generally stop practicing their faith. Now that same Church is going to consult with the undereducated, misinformed and fallen away AND ASK THEM FOR ADVICE. Heck, why do I bother with "picture this"?--IT'S RIGHT THERE IN FRONT OF US, waiting to shovel more "renewal" down our nauseated throats!

Your recollection is the same as mine. It got to be pretty ridiculous particularly when Vatican II was invoked for things it did not say, like Mass ad orientem, but ignored for things it did say like the Latin Mass was to be preserved. The buzzword of that era which is now ignored is "collegiality" because the current Pope is anything but collegial, he is a dictator.

I’ve listened to a few bishops trying to put a happy face on all of this “synodality” and it all shows that every bishop I’ve heard and others willing to talk about it, is they are clueless about what all this is about and where it will lead and why we are doing this. Cardinal Dolan gave a somewhat good homily on it Sunday. But he basically said he is clueless about most of it but he put a positive spin on it.

I pride myself in believing that I have listened to and heard many people over the years, from highly committed and informed Catholics to the tepid, angry, disengaged and non-practicing one. I’ve heard what people want and it coincides not with Scripture and Tradition but secular trends and fads. Women priests, same sex marriage and sexual license. I think most Catholics good, bad and indifferent want the Church, the pope and the clergy to stay out of their sex lives and stop heaping guilt trips on them.

They want to ask for forgiveness from God directly and not in Confession and not want to be made to feel guilty in not going to Confession. They want obligation abrogated and if they want to go to Church they will and if they don’t they won’t and don’t wan to be made to fee guilty about not going or sending their kids to Catholic schools or CCD programs and when they go to Mass they want to receive Holy Communion and not told they can’t until they go to Confession which they don’t want.

Jews are offended at our pretense that Jesus is ours and their Messiah. They are offended by the Gospel of John that is anti-Semitic and even the Pope is that way when he derides the Pharisees and doctors of the law and inadequacy of the first five books of the Hebrew Scriptures the Law.

A lot of Muslims want to behead us. And the world just ignores us.

Thus the synodal process in a nutshell. What do we do to please each human being in the world?

You summed it up about as good as can be done. I noticed a real hatred for Catholicism that unites the far right fundamentalists and the extreme left hedonists. The attacks on Catholics and the Church are really full of venom. I remember people making jokes about the priests that got beaten and killed in Phoenix 3 or 4 years ago. The young priest who was killed was an FSSP. I don't know if you've used this text as a homily, but you should. God Bless You!

Sophia here: Way to go Father McDonald! Thank you and may God continue to bless and protect you!

With the USCCB Fall meeting rapidly approaching-November 15-18- and with the issue of Eucharistic Coherence, arguably the most important on their agenda, I bring this to your attention.

'The text of the Canon 915 in the 1983 Code of Canon Law is as follows: “915. Those upon whom the penalty of excommunication or interdict has been imposed or declared, and others who obstinately persist in manifest grave sin, are not to be admitted to Holy Communion.”'

See also this discussion of the letter, "Worthiness to Receive Holy Communion-
General Principles" which was sent by Cardinal Ratzinger, then Prefect of the Congregation for the Doctrine of the Faith, to Cardinal McCarrick and Bishop Gregory, the president of the USCCB:

Please pray that faithful Shepherds will again prevail as they did in their Fall Meeting in 2019 when the 2/3 of Bishops who voted that abortion was the preeminent issue for the 2020 elections triumphed over the fierce opposition of the other 1/3!

You're really losing it, Fr. ALLAN McDonald. More and more often you fly into theses 100% self-referential rants, bizarre, baseless accusations against Protestants and/or Muslims or your bete noir of the moment, theologically barren assertions, way beyond the pale judgments of popes, cardinals, bishops, and priests.

And your adoring public, all 5 of them on a good day, shout, "AMEN!"

Your last sentence characterizes the idiocy of your entire comment. My page views for October thus far:

You're way over the edge, Fr. ALLAN McDonald.

LOL - you are a true narcissist and the epitome of “non serviam!”

Father, you have nothing to prove.

Those empty criticisms (which you could have just as well deleted) aren't worth your time and only reflect upon their source and his complete lack of self-awareness.

Next time, don't bother taking the bait. The rest of us here understand. All five of us!

Let us see your count. Prove it!

John, Anyone (ahem) can make up numbers...

Yes, you certainly have done so; thank God the platform "blogger" doesn't.

So you have the VII/Synodality blather vs. the Fr. Altman types who might, in principle, be right, but when they articulate extremes it becomes irresponsible. Who to listen to then, or, just keep your filter working overtime?

Today's Gospel is apropos for this conversation. Christ warns those who are entrusted with much that they will be "beaten" if they don't guide their flocks according to the Master's rules. Father McDonald's instructions and his honest evaluation of what leads people in the wrong direction are an example of faithfully following today's Gospel. Dissenters get ready for a good old fashion #9.