I AM UNCOMFORTABLE WITH ELIZABETH'S SCALIA'S RECOMMENDATION 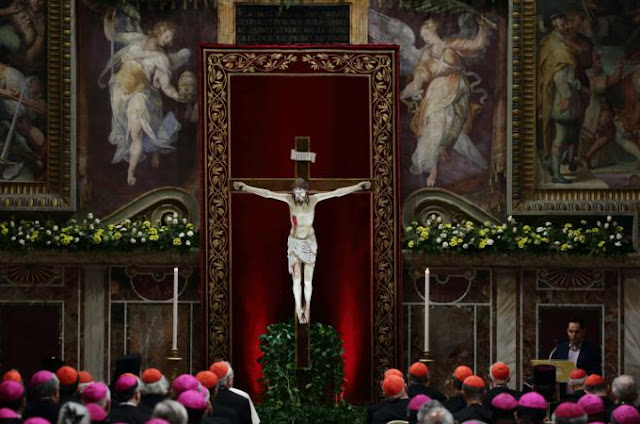 In a nutshell, Elizabeth Scalia asks that the Vatican have every bishop of the world fill St. Peter's Square, lay prostrate on the cobblestone and everyone ad orientem along with the pope and repent publicly of their complicity in enabling the sex abuse of countless victims over the centuries.

The Vatican did have something similar on a smaller scale a couple of years ago. I remember when the now disgraced Archbishop Rembert Weakland was exposed as an unchaste homosexual and channeling (embezzling) huge amounts of diocesan funds to his lover, that he had a penitential service repenting. He should have been arrested for embezzlement and disciplined a bit more by the Church for breach of his vow of chastity and the criminal act of embezzlement.

It all strikes me as theater, though, and I just don't know about it.

Wouldn't it be better for the pope to reinstitute the more rigorous pre-Vatican II ascetical practices for both the clergy and laity as a penance for all of this? I am talking about fast and abstinence as it was prior to Vatican II, especially the Eucharistic Fast--maybe not from midnight but at least 3 hours before Mass in imitation of Christ's three hours of agony. I am speaking of the rigors of the pre-Vatican II fast for Lent. I'm speaking about ember days (Wednesdays) days of fast and abstinence.

And, moving forward, remove popes and bishops who have enabled and are enabling "winks and nods" against the moral law of God in all areas of Church teaching. That has returned with Pope Francis and with a vengeance under the guise of mercy and the Church as a field hospital.

Field hospitals often have to perform amputations to save the life of an injured person.

Elizabeth Scalia on sex abuse: ‘There needs to be a penitential liturgy’

The direction of the preternatural debates at PrayTell and other similar forums has the purpose of making faith in Jesus Christ and men's relation to the Creator a small matter in the big scheme of things. It is a chance for the devil and his sypathizers to gloat over their fleeting success to mislead countless souls.

You're uncomfortable with it because it's utter nonsense, or as you aptly put it. "theater". With a populace as media-savvy as today's I don't know how someone could think such a palpably transparent gesture could have any possible effect. Pure B.S..

Public repentance should have taken place a long time ago and the majority of bishops should have been fired. Ms. Scalia's prescription will bring about as much change as kneeling during the national anthem or wearing a pink ribbon and believing it will end breast cancer.

Then again, never underestimate how stupid our leaders and oligarchs truly think we are.

The other prob, besides the whole Kabuki theater aspect of it all, is the anonymity. Over a thousand bishops face down removes the reality of any particular bishop, alone, by himself, prostate and very much, face down.

We would do far better by ordering every single cardinal and bishop, priest and religious, to undergo a real lie detector test, not a polygraph, rather a brain scan, which is incapable of being misled or deceived. When someone lies, entire areas of their brain light up like a Christmas tree. We begin from the head down, - so we begin with Bergoglio himself, then the Cardinals, the Archbishops, etc. For those in superior positions, the results are publicized. If someone isn't willing to submit, - then can always resign their position and become laicized.

That's what needs to be done, and for those that fail, - a swift purging.

But afterwards, the priests remaining won't have to go out in public shamefaced because of the perversity of so many of their collegues and superiors.

Unknown, if you wish to continue to post on my blog, you must create a handle. This is what blogger says about your "unknown" status:

Additionally, for those who weren't complicit, is it really fair to expect them to participate in a spectacle of this sort? What about aged/infirm, will they be subjected to unjust criticism should they be unable to participate?

I agree the big pity party at St. Peter’s is not the way to go. For every miscreant bishop there are likely dozens who have done nothing wrong. Sin or guilt is personal, not collective