God only knows what Bishops’ Conferences will develop but surely no where in this decree are priests, deacons or laity to make it up as they go and take upon themselves the authority they don’t have to change the liturgical text’s translation. That’s pretty clear to me, no? 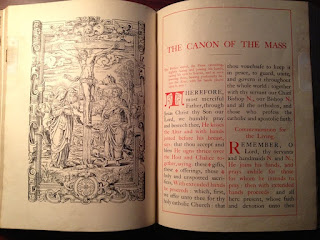 Your Excellency, this implementing Decree sheds light on what was established in 2017 by the Pope’s Motu proprio Magnum principium (3 September 2017). Before going into the details of the Decree, may we recall in brief what the Motu proprio established?

In summary, we can say that the Motu Proprio Magnum principium changed the formulation of some norms of the Code of Canon Law that have to do with the publication of liturgical books in vernacular languages. For this reason, a series of modifications have been made to the text of canon 838, specifically to paragraphs 2 and 3. The Motu Proprio itself recalls and sets out the basic principles for the translation of liturgical texts which, as the prayer of the Church, are regulated by the competent ecclesiastical authority.

Fundamentally the aim is to make collaboration between the Holy See and the Bishops’ Conferences easier and more fruitful. The great task of translation, especially translating into their own languages what we find in the liturgical books of the Roman Rite, falls to the Bishops. This task is a great responsibility because, thanks to these translations, the revealed word can be proclaimed and the prayer of the Church can be expressed in a language which the people of God can understand.

What are the relevant and substantive points of the implementing decree?

This implementing Decree, which is called Postquam Summus Pontifex and is dated 22 October, the memorial of Pope Saint John Paul II, presents the norms derived from the modifications contained in Magnum principium. It should be especially underlined how it clarifies and defines these norms with regard to the publication, recognitio, and confirmatio of the liturgical books, which is a common task of the Episcopal Conferences and the Apostolic See.

This Decree consists of an Introduction and two parts; the first part presents the norms and procedures to be taken into account when publishing liturgical books, both for their translation and for the introduction of “more radical” adaptations, as envisaged in number 40 of Sacrosanctum Concilium.

In the light of this reform — and of the clarifications that Pope Francis wrote in his letter of October 2017 — how is the relationship between the Congregation for Divine Worship and the individual Bishops’ Conferences developing on the subject of translations of liturgical texts into vernacular languages?

On the other hand, our Dicastery is responsible for reviewing (recognitio) the adaptations approved by the Episcopal Conferences and confirming (confirmatio) the translations made. This is always to take place in a climate of collaboration and dialogue that favours the liturgical life of the Latin Church, as Pope Francis himself pointed out in Magnum Principium.

In the four years since the publication of the Motu proprio, how can its application be assessed?

My experience in these years as Archbishop Secretary and, since a few months ago, as Prefect, has been very positive and also very enriching. In our daily work we see the universality of the Church and, at the same time, the uniqueness of each church.

The Bishops, as moderators, promoters, and custodians of liturgical life in their particular church, have a great sensitivity, due to their theological and cultural formation, which enables them to translate the texts of Revelation and the Liturgy into a language that responds to the nature of the People of God entrusted to them.

Taking into account what the Motu Proprio indicates and in the light of this implementing Decree, our Dicastery wishes to be, as the Holy Father desires, an instrument at the service of the universal Church. All this can be summed up by saying that at the heart of this change is the desire to bring God’s people closer to the liturgy and the liturgy closer to them.

When the vernacular was first introduced in 1964 Bishops' Conferences issued their own approved translations. Those approved for England and Wales were not the same as those approved for Scotland, and Ireland was different again. The USA used a version approved by the USCCB.

ICEL was formed to standardize texts across the English-speaking world; not an easy task considering the large number of Episcopal Conferences involved. To what extent do English-speakers actually speak the same language? Most of the criticism of the current translation came from the US. Although ICEL's secretariat is based in Washington DC, Monsignors Wadsworth and Harbert, the most prominent members of the directorate, happened to be Englishmen.