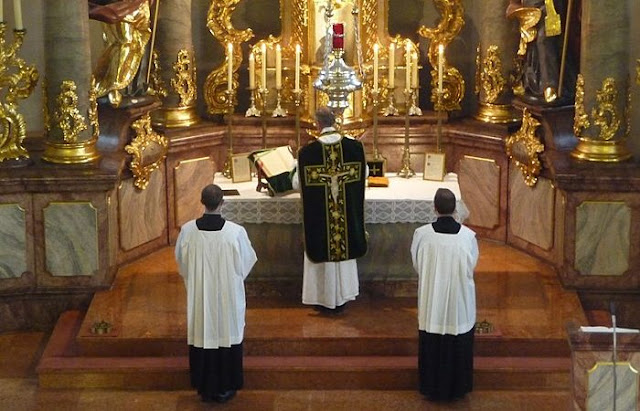 Jonathan Day of Praytell asked a good question about UTC’s (Unreformed Traditional Catholics, a wonderful term I use in the most positive, reformed and redeemed way) and if they would not allow the Modern Order of the Ancient Mass (MOOTAM) if a pope abrogated it? What he meant was a similar arrangement that Popes John Paul II and Benedict XVI allowed for the Ancient Order of the Ancient Mass (AOOTAM) that a future pope would allow for the MOOTAM if the AOOTAM became the normal Mass of the Church once again.

However, I think a third way is possible and most desirable and what Pope Benedict envisioned for the future. It won’t happen under this Uber progressive 1970’s pope we have now, but it could in the future if common sense prevails in the papacy and the Church, which I think the Holy Spirit of surprises will provide, not that I am a gnostic or anything like that.

And this new Missal that could supplant both the 1962 and 1970’s versions of the Roman Missal is staring us right in the eye and it is the Roman Missal called the Ordinariate’s Divine Worship, the Missal.

I am not say that that Missal should supplant the two missals I mention. But the sensitivities  this Roman Missal, which is the reformed Mass of Vatican II, has toward tradition, especially that of the Anglican Communion’s High Church “Mass.”

It is basically a Tridentine Mass in the vernacular with archaic English that becomes a sort of “sacral” liturgical language.

I am not saying the new Missal should have a “sacral” vernacular language, our tradition is Latin that takes on this role.

I am suggesting that there be a new Roman Missal that allows more options explicitly mandated in the new Reformed Roman Missal:

The Traditional Ancient Order of the Mass which includes:

The Prayers at the Foot of the Altar

The rubrics for the approach to the altar afterward with the greeting “The Lord be with you” prior to the Collect.

The normal liturgy of the word with the modern Missal (and by way of exception the 1962 missal’s lectionary) with a Calendar more like the Ordinariate’s which is more like the Tridentine calendar.

The offertory prayers either in the traditional format with its rubrics or the modern version.

Following the Preface Dialogue, the order of Mass is exactly as the 1970’s Missal, except the reenchantment of the rubrics for the Eucharistic Prayer, which are only two, the Roman Canon for use on Sundays and the option of the Eucharistic Prayer II for weekdays (which is the Ordinariate’s compromise).

The option of a soft spoken or out loud Eucharistic Prayer.

The option of the Last Gospel.

The options in the Requiem Mass mandated for funeral Masses, meaning shorter prayers at the foot of the altar, no Glory be… and the Lamb of God with the changed endings for funerals.

Would any of this be so difficult?

Finally clear options for ad orientem and Holy Communion kneeling and at the altar railing.

Father please let go of this madness that has helped to destroy our Lord’s church. You can’t reform madness. It has to be pulled up roots and all and burned.

Catholic martyrs during the French Revolution. You are spot on.

When we had the EF the US Church was at its zenith, with the OF the Church is at its nadir and no amount of happy talk from the clueless doubleknit dinosaurs in the hierarchy can change that.

"Would any of this be so difficult?"

Would any of this be so necessary? And to what end?

I think you would need catechesis before attempting to reenchant the liturgy as well as the aesthetic in this way. In part, the aesthetic is a style preference. Despite this and despite it largely being my style preference, among others, it will not be the preference of some and if we're being fair, it likely does not need to be either absent "legislative" change.

If the aforementioned isn't accompanied by a recommitment to the true presence, spirituality, adherence to doctrine and giving people a sense of hope, top down, I'm not sure that just changing the liturgy and the aesthetic will make much of a difference. The way liturgy is celebrated and the aesthetic is part of the overall path towards salvation; but, it is not the entire path. Perhaps this is an extension of Fr. MJK's thought.

It is pretty clear Father K is not in this camp. It apparently does not bother him, nor a ton of bishops and priests, that only about 30 percent of OF attendees believe in the Real Presence

ByzRus - When we talk about "believing" I understand that it is far more complex than answering a question from a poll-taker. Anyone can say, "I believe in the Real Presence," that's the easy part. Taking "believing" from answering a question or making a statement to a day-to-day way of life is another matter. “Not everyone who says to Me, ‘Lord, Lord,’ will enter the kingdom of heaven, but the one who does the will of My Father who is in heaven will enter." It is the person who does the will of the Father who is the believer. And maybe even if he/she does not acknowledge that directly.

This is why the "I have accepted Jesus as my personal Lord and Savior" thing is inadequate. First, it is far more important that Jesus has accepted me, a sinner, as a sheep of His flock than me accepting Him. Second, being a Christian is, as I said above, not simply making a statement, but living a life that, as the opening prayer for today's mass said, makes us the leaven in society to renew it and to transform it into the family of God." (Collect from the Mass for Holy Church 1B)

No, I do not share the view that reverting to the EF will bring about a significant change in peoples' faith. The catechesis needed is that which leads Christians to be more self-sacrificing, per roday's first reading, Romans Romans 9:1-5, more generous in sharing material gifts, and more forgiving or those who have harmed us. This is the leaven that is needed by society, not Latin or chant, not damask or watered silk, not eucharistic prayers spoken inaudibly.

Thank you for your thoughts. We're aligned. I'm not suggesting a return to the EF btw. I think such a reversal would be difficult given how Catholics have changed and are influenced by society at-large. I think that's just reality. I'm certain there will be those who disagree and disagree promptly on this blog but, realistically, you aren't going to switch things back and just expect a multitude of people to instantly materialize. I honestly think the opposite would occur - it would make people leave regardless of the wrongness of their reasons for so doing. That said, I do think we can do better with the reformed liturgy. Beauty attracts. The message and the sacraments nourish. Bringing some of the best of our tradition to the reformed books seemed to be what Pope Benedict desired and modeled. It seemed like a reasonable desire and approach, at least to me. Anyhow, perhaps too much of my focus is on the aesthetic, the points conveyed in your first and second paragraphs should be given pride of place.

ByzRus - I think it is very difficult to overstate the importance and the place of aesthetics. But I think it is also necessary to recognize that aesthetic sensibilities evolve and change. What was thought to be beautiful, what connected with folks in the past may not be appropriate today.

Agree. Aesthetic sensibilities do indeed evolve and change. I don't think that's wrong or bad, it's just reality. Organic change can be healthy. Iconography has evolved over the centuries. Vestments have evolved (conical looks profoundly uncomfortable and bulky), the tabernacle has evolved, iconscreens have evolved from being more like a fence to a screen thats 30+ feet tall in some instances. Architectural styles have changed (some attempts at change have had more success than others), and, thank goodness, some building materials as well.

While I appreciate the aesthetic, the arts and sacred music, it is good to be reminded that "it is far more important that Jesus has accepted me, a sinner, as a sheep of His flock than me accepting Him".