My memory about when the congregation began to approach the altar railing is right!!!!! As soon as the priest said his "Dominus non sum dignus" and began to recieve Holy Commuion, communicants immediately began to approach the altar railing and kneel at it. The choir came downstairs and in hopes of getting to the railing first but normally they were still in the aisle and then the priest after receiving his Holy Communion would turn to the congregation with the congregation's host over the ciborium and declare "Ecce Agnus Dei" at which point anyone standing in the aisle would fall to their knees on the hard floor.

Unfortunately at today's EF Masses that I celebrate, I have to wait for people to approach the altar railing after I distribute Holy Communion to the altar boys/men in front of me. That is so wrong and against pre-Vatican II custom in this country!

Here is proof of what I experienced and recall correctly in this pre-Vatican II photo where the priest has just turned to the congregation for the "Ecce Agnus Dei". Please note the communicants already at the railing and kneeling: 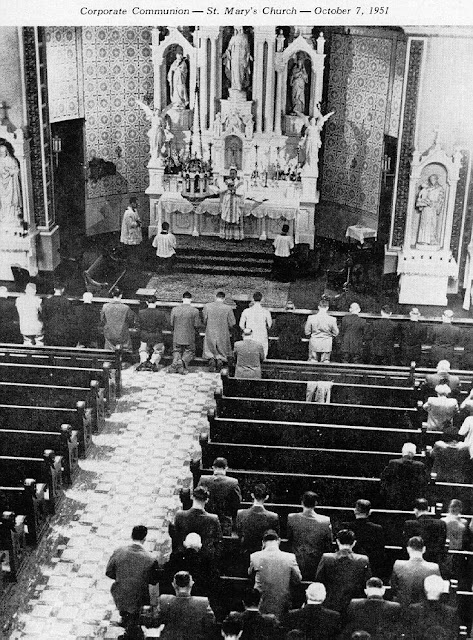 I am struck also by all the men at this Mass for what is called a "corporate" Communion. Does anyone recall what that was, corporate Communion. But it is clear that more men were involved in men's organizations in the Church prior to Vatican II and loved the regimentation and demanded reverence of kneeling for Holy Communion and wearing their Sunday best to Mass!

I think the pre-Vatican II customs at Mass appealed to men and kept them engaged in the Mass and leaders in their Catholic families. Today, not so much! More men are disengaged and leave the religious upbringing of their children to their mothers.
Posted by Fr. Allan J. McDonald at Monday, November 25, 2019

There are multiple articles on the internet that will attest to the fact that the Novus Ordo Mass offends the masculine sensibilities of normal, healthy men in a number of ways and has been a key factor in driving men out of the Church. The prayers alone read like a castrated version of the Mass when compared to the EF. The regimented ritual has been replaced by casualness. The rich musical tradition has been replaced by childish "hymns", many of them penned by known homosexuals ("Here I Am Lord, etc.) and, ultimately, too many of the clergy have become effeminate themselves, modeling a type of emasculated ministry that any normal boy would find repulsive (no, not you Father). As I have said before--as awful as this sounds, it's true: Many Catholic men don't attend Mass because they are suffering from "fag fatigue"--a general disgust and revulstion by the wimpy, silly soft "men" who we see celebrating Mass today. And it doesn't help that the public now sees the priesthood as a largely homosexualized "profession". And, as usual, we have no one but ourselves to blame. We let it happen. If you speak up now, you'll be targeted, marginalized or God knows what else by the "tolerant" "loving" leadership that staffs most parishes and chanceries. It's going to take and act of God to clean up the filth...and, as we have all figured out by now... it goes all the way to the top. This is a very difficult time to be a Catholic.

Our choir usually come down right after the Agnus Dei, as the priest is communing. So they're in the aisle kneeling and ready for communion as the Confiteor is said and then the "Ecce Agnus Dei."

We have the Franciscan sisters at our Sunday mass, so they receive communion first. Then the choir. Then everyone else.

"...ultimately, too many of the clergy have become effeminate themselves, modeling a type of emasculated ministry that any normal boy would find repulsive (no, not you Father)."

Hmmm... when did this feminization begin I wonder.....

(It's a rhetorical question, of course. There is no "feminization" of the Church.)

You have to WAIT for people to approach the communion rail! I am SHOCKED, I tell you, SHOCKED!

Oh dear! Oh dear! Where are my smelling salts? I think I shall faint!

Holy Mother Church has been served by men for centuries. It was founded by a man. You take the men out the equation, and you have a losing proposition.

Yes the bride of Christ....Christ is the Bridegroom. Pope Benedict said this is why the Church sees homosexuality as incompatible with the priesthood, even for those who live a chaste life yet we see liberals in the Church supporting homosexuals in the priesthood and also ordination of women. So yes that is a type of feminization.

Is it just me, or do the comments of 'Anonymous' sound very effeminate?

Of course Pitty Pat is an alter ego of our 'Anonymous.'

Can you please provide citations/links to some of the “multiple articles on the internet” to which you refer? I do not doubt that there are such articles but I would like to read some for myself. Perhaps they will succeed in dissuading me from my suspicion that men whose “masculine sensibilities” are offended by the Novus Ordo Mass are not “normal” or “healthy” but, rather, at some level, perhaps even an unconscious one, somewhat insecure in their masculinity. But I will certainly try to keep an open mind on the matter and look forward to reading the aforementioned articles.

I suspect it’s just you.

Interestingly, an attempt was made a while back at St. John Cantius to revert to the practice you remember Fr. McD. We were instructed to begin approaching the Communion Rail at the beginning of the priest's communion, just as he said his last "Dominus non sum dignus."

It caused much confusion. Some people went forward, but as they were walking toward the front the priest would turn, showing the Body of Christ and say "Ecce Agnus Dei" and many just didn't know what to do...stop? kneel where they were? keep walking?

After a couple of weeks it was announced for us to just stay in the pews until after the Ecce Agnus Dei.

It is one aspect of the Novus Ordo I think is very good, that is, for people to remain in the pew until after the Ecce Agnus Dei and then proceed forward. I do love that moment of adoration just before receiving Our Lord. It is a profound moment and deserves reverence. And I don't notice much delay in distribution of communion, because usually the people from the front pews are already kneeling at the communion rail by the time the priest gets there.

The bell is rung thrice at the celebrant's 'Domine non sum dignus' but this is not not a signal for the faithful to approach the rail. As soon as the celebrant has received from the chalice the server recites the Confiteor and the celebrant prays the Misereatur and Indulgentiam (turning towards the server). Only after that does he turn to the congregation for the Ecce Agnus Dei.

In 1960 the Confiteor at this point was supposedly dropped, although it still persists in many quarters. Be that as it may, no-one in his right mind would have been caught standing in the queue at the Ecce Agnus Dei. It is so easily avoided. In fact, approaching the rail with the intention of falling to one's knees before getting there is an exhibition of ostentatious piety which is deplorable. The men in your photograph are already kneeling at the rail and there is no queue behind them.

'Feminization' affects not only the churches, but politics, the professions, the police, even the armed forces. As it's ideologically driven, it is assumed that its effects must be beneficial. One could make a case that, on the contrary, its effects can be deleterious, even corrosive. But any man (or woman) brave enough to argue this in the public domain would encounter a furious backlash which could put their livelihoods at risk.

The pontifical Mass recencelebrated in Washington's Basilical, the confiteor was recited as you mention John, just prior to the Ecce Agnes Dei.

A2, nah, not me. I wouldnt criticize Fr McDonald...

Of course the confiteor was recited before communion. That's how it's always done. I believe the master of ceremonies was a canon with the Institute of Christ the King.

The Remnant item contains a major assertion that has been proven to be false.

It concerns to quote attributed to Bugnini: "We must strip from our Catholic prayers and from the Catholic liturgy everything which can be the shadow of a stumbling block for our separated brethren that is for the Protestants.”

He never said this. Never.

Here's what he said: "And yet it is the love of souls and the desire to help in any way the road to union of the separated brethren, by removing every stone that could even remotely constitute an obstacle or difficulty, that has driven the Church to make even these painful sacrifices."

This is, unfortunately, the type of false claim, unsupported assertion, or mere expression of opinion that some use to underpin their traditionalist claims.

It's not a substantive argument, let aloine a convincing one.

Yeah, if you read every one of those articles, I'm sure you can find at least one inaccuracy in each of them, probably more, or else discredit the author or the publication. That's fine, because with rare exception, that describes the accuracy of most published stories, articles and blog posts.

However, the absence of men in the pews and the fall in vocations speaks for itself. It is also interesting to note the dioceses that have most generously applied the indult granted by JPII and, later, Summorum Pontificum, are usually the leaders in vocations.

I'm sure you'll want to shoot me down, Anonymous, so I'll grant you the last word.

Cletus, the error in the Remnant article is not "one inaccuracy." The false quote is the central item in the piece. If it falls, the whole argument is lost. Bugnini isn't the devil, his motives were not to destroy the Church, he wasn't the leader of a cabal of Masoncially inspired attempt to dismantle the dogma of the Church from within.

Error does not describe accuracy in the items you posted, unless you believe that error doesn't matter. "All published stories have errors in them" isn't true.

"Bugnini isn't the devil, his motives were not to destroy the Church, he wasn't the leader of a cabal of Masoncially inspired attempt to dismantle the dogma of the Church from within."

I'm not so sure about that. What proof do we have that said quote was false? Even if the quote IS false, can we hang our absolution of Bugnini on clearing up one single quote?

Wait a minute! I thought we were discussing the alleged failures of the New Mass. How did this turn into a debate on the record of Bugnini?

Proof: March 19, 1965 edition of L'Osservatore Romano. This has Bugnini's actual words, not the false version so often attributed to him.

Gee, we all know how accurate and reliable THAT paper is!

Bugnini was the monkey to Paul VI's organ-grinder. Those who, out of misplaced respect for that 'sainted' pontiff, heap all the blame onto Annibale would do well to read Paul's actual words on the subject of liturgical reform (see the NLM post of 25 November).

Bugnini may have been arrogant and deceitful, but so was his master.