DON'T BLAME CATHOLICS, ACTIVE OR NOT, OR EVEN NON CATHOLICS FOR NOT BELIEVING WHAT THE CHURCH BELIEVES ABOUT THE MOST HOLY EUCHARIST, BLAME VATICAN II'S NEEDLESS CHANGES TO CATHOLIC PRACTICES OF DEVOTION AND WHAT CONSTITUTES REVERENCE, AWE AND WONDER NOT TO MENTION MYSTICISM ESPECIALLY IN THE RECEPTION OF HOLY COMMUNION 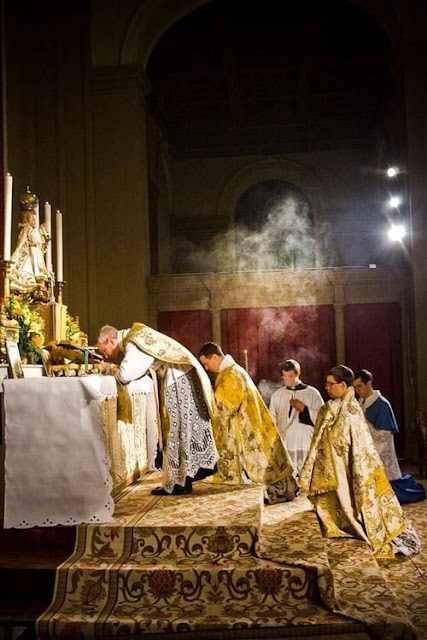 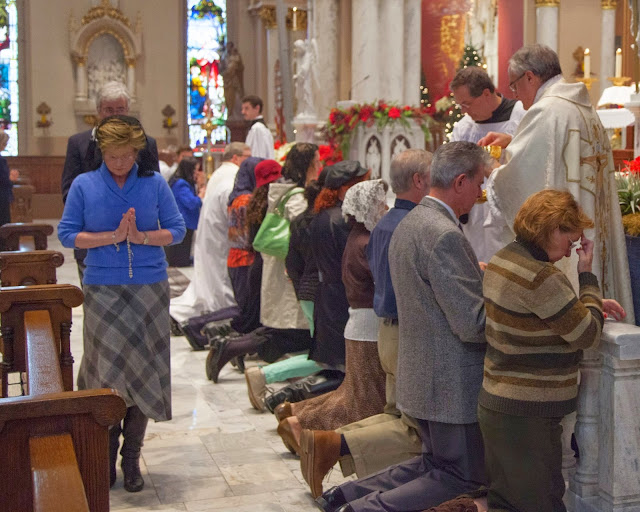 Do Catholics believe in transubstantiation (aka, Real Presence) or not? A recent survey says very few do. But was there a problem with the survey? Yes and no.

We should expect that Catholics who seldom if ever attend Mass would have a very shallow understanding of what the Church believes about the Mass in general and the reception of Holy Communion in particular.

As for believing Catholics who attend Mass regularly, maybe every Sunday, there would be a variety of answers to what the Mass is and Holy Communion is. Most, I would suspect, believe in the Real Presence, but maybe would not articulate well what transubstantiation means. The more popular term is "Real Presence" because it is less philosophical and more practical.  I don't think we should condemn Catholics who lack a good articulation of transubtantiation because they believe in the Real Presence and take seriously what it means to recieve Holy Communion worthily and understand genuflecting before the tabernacle, if they can find it, and being horrified at the desecration of the Sacred Host stolen or used in a sacrilegious way.

What would help practicing Catholics, lapsed Catholics and non Catholics know and understand what the Church believes about the Mass in general and Holy Communion in particular.

Before I repeat my list which I have bloviated about before, let me say this. Catholic of my generation and older who are "cusp" Catholics were instilled with a since of reverence and awe in the Sacred Actions of what is now called the EF Mass. Even non Catholics who attended Catholic Mass prior to Vatican II had a sense of the awe and reverence of the Mass and Holy Communion in particular.

After Vatican II, faithful Pre-Vatican II formed Catholics still held orthodox beliefs even though the sloppiness, irreverence and silliness they experienced in the reformed and deformed rites were and are quite common in the post-Vatican II reformed Mass.

Catholics only formed in a deformed experience of the OF Mass are clueless about awe and wonder, mysticism and mystery as well as what actually constitutes reverence for the Mass itself and Holy Communion specifically.

These are the things that can help restore orthodox belief or understanding not only to practical CAtholics who are unfortunately a minority in the church but more importantly to the majority of lapsed Catholics who attended once or twice a year. Also for non Catholics attending sometimes would experience the profound awe and reverence of the Mass and evangelize them:

1. The Benedictine Atlar arrangement and ad orientem for the Liturgy of the Eucharist.
2. KNEELING for Holy Communion which should be #1 and receiving on the tongue
3. The use of Extraordinary Ministers of Holy Communion only in case of need
4. Insisting on the formality of the Mass through proper choreography, dress of those in any liturgical role, i.e. Alb or cassock/surplice and proper maintenance of altar linens and other accoutrements.

If these things are present, even an atheist would have to admit after attending a Catholic Mass that the Church takes seriously the reverence due the Mass and Holy Communion.

This is a good article to read:

This is a bit off topic but apparently PF has not reinvigorated the Church in Argentina:

Will the National Catholic Distorter Report this?

I'd be interested to see data on how many Novus Ordo presbyters believe in transubstantiation.

Good point. Depending on when the priest went to the seminary (or where), he probably thinks of the Holy Sacrifice of the Mass as a "Happy Meal."

This article says it all.
On the 30th we celebrate 50 years of the anti-church mass

If Christ can raise the dead, heal the sick, walk on water, and get up and walk out of a tomb I would imagine that He can be present wherever He chooses. He told us He would be present in the Holy Eucharist, so this is a non-issue for believers.