IS IT POSSIBLE THAT AN AGING POPE MAY BE HAVING A PAPACY OF SENIOR MOMENTS? 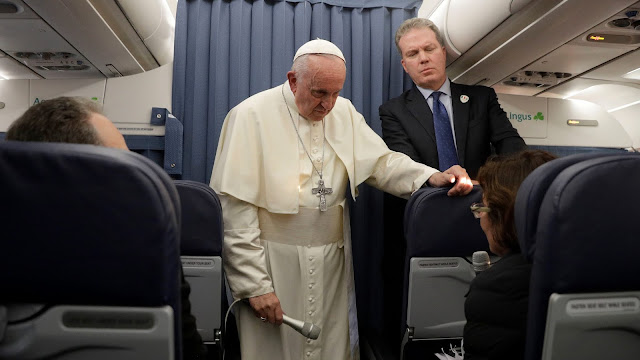 In an article in Crux, John Allen, slightly left of center, writes this about Pope Francis:

ROME - Papacies are complicated things, and it’s always a mistake to reduce them to a single idea, source of inspiration or soundbite. That’s especially true when it comes to Pope Francis, whose tenure at times seems almost a jumble of different, and even occasionally contradictory, impulses and agenda items.

And then the Uber progressive Praytell blog has a contributor writes this:

As PrayTell already reported the recently concluded Amazonian Synod called for the establishment of an “Amazonian Rite” in its final document.  However Pope Francis in his off the cuff remarks at the end of the Synod seems to have cast some doubt on the proposal.  The final document had proposed that “the new organization of the Church in the Amazon must form a competent commission for studying and dialoguing, according to uses and customs of ancestral peoples, on the development of an Amazonian rite which expresses the Amazonian liturgical, theological, disciplinary, and spiritual patrimony, with special reference to what the Lumen Gentium affirms for Oriental churches” (Final Document 119).
His remarks are not in perfect prose but I think that in his comments Pope Francis seems to  be in favour of giving the task of composing a new Amazonian Rite to the Congregation for Divine Worship in Rome and not simply leaving it to the local Church.

Adds to the confusion already in abundance and caused by Pope Francis.

My question: With all the double speak, incoherence, confused, muddled thinking and eccentricity, passive aggressive,  some perhaps caused by mental illness, is it possible this pope is experiencing Alzheimer’s or age related dementia?

Pray for Pope Francis and pray for the Church.
Posted by Fr. Allan J. McDonald at Saturday, November 02, 2019

I don't believe him to be naive for one second.

Well this article may push Pope Merciful over the edge:

That man isn’t aging fast enough for me. He seems like he is getting stronger. He feeds off of the confusion and error he is sowing. Honestly, he can’t be dead and gone fast enough. I know the next pope will be worse but just to know that Francis is facing his savior and has to give an account of what he has done is a silver lining.

Only if hatred of Catholics and belittling every Catholic that actually believes and getting a thrill whenever one can undermine Our Lord, is a symptom of a 'senior moment.'

Correct me if I'm wrong but I always thought the different Rites of the Catholic Church had Apostolic origins and that the Church cannot simply concoct or fabricate a new Rite (though we all know that a new Order of Mass was concocted or developed in the 1960's by the Concilium for the already existing Roman Rite). Please enlighten me if I am misinformed . .

Joseph....Traditionally yes, what you're saying is right. (I don't believe the novus ordon't is invalid)...But it is a complete arrogance to manufacture an entirely different liturgical praxis that barely resembles the TLM. The Liturgy is perhaps the biggest point of contention when it comes to union with the other churches (read Orthodox Caledonian and non-Chalcedonian) ....One could well make the argument that the Pope does not have the authority to create anew.

The Pope enjoys the awesome power to "recognize and establish any practice touching the worship of God, according to Pope Venerable Pius XII.

Via his 1956 A.D. closing address to the Assisi Liturgical Congress, Pope Venerable Pius XII reiterated the above:

"We have recalled the role which the Magisterium, the depository of the truth of Christ, carries out through the liturgy;

"the influence of the authority of government on it is also evident, since it belongs to the Popes to examine current forms of worship, to introduce new ones and to regulate the arranging of worship..."

Is he correct? If so, are we to assume Pope Francis, among many others, has "strayed from the straight path"?

62. But it is neither wise nor laudable to reduce everything to antiquity by every possible device. Thus, to cite some instances, one would be straying from the straight path were he to wish the altar restored to its primitive tableform; were he to want black excluded as a color for the liturgical vestments; were he to forbid the use of sacred images and statues in Churches; were he to order the crucifix so designed that the divine Redeemer's body shows no trace of His cruel sufferings; and lastly were he to disdain and reject polyphonic music or singing in parts, even where it conforms to regulations issued by the Holy See.