Pope Francis wearing festive, almost Marti Gras-like vestments, celebrates the Requiem of All Souls, in one of Rome’s catacombs. Matching miter and cope below as well! 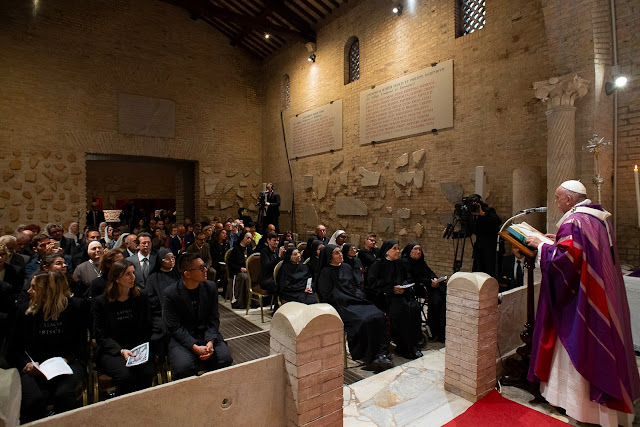 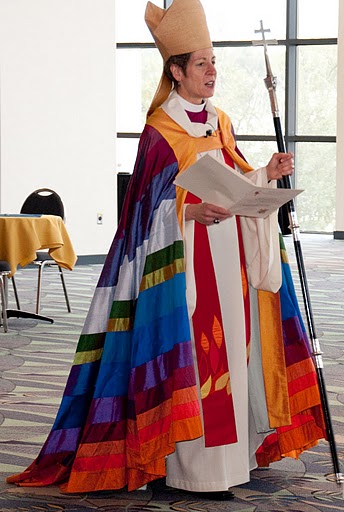 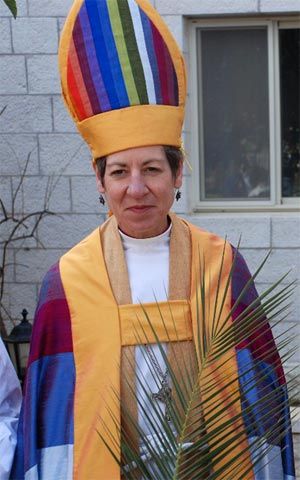 I celebrated mass at that altar in 1987! Fr. Placid Solari, OSB, now abbot at Belmont Abbey in North Carolina and one of my teachers there, was working on his doctorate in Rome at the time we visited. He set aside his work and became our tour guide for about 8 days. When we said we wanted to see catacombs, he recommended this location, noting that the Benedictine sisters needed the support. He also said that you could go to one of the "big" catacombs on the Appian Way, but that once you had seen two or three underground passages with niches along the walls, you had pretty much seen all that you would see in a catacomb.

The temperature was a constant 56 degrees, and the nun who gave our tour wore a heavy down coat. Along the way she asked "What languages?" We responded Italian, English, German, French, and, from one couple Dutch. She said, "No Dutch!" and off we went.

I can’t help thinking why does Msgr. Guido Marino continue to serve as Francis’ MC. There is no way I could continue standing by that man’s side after all he has done. The pagan demon worship service in the Vatican gardens was the last straw. I use to have respect for Msgr. Marini, not so much any more. I would have to pack my bags and just go knock on the door of the nearest SSPX residence and ask for entrance.

This article is off topic but you will enjoy it. The author refers to Cardinal Dolan as a tower of jello!

My personal belief (not based on Canon law) is that these bishops have excommunicated themselves!

PF mumbles a Mass (in Italian). At the same time, down the road from where I live, the Fathers of the Oxford Oratory celebrate a Solemn Mass in the classic Roman Rite, followed by absolutions at the catafalque.

Forget what happens in Rome. Guido Marini notwithstanding, papal liturgies are bad and getting worse. I no longer bother to watch them.

Note from beneath the floor, (catacombs, perhaps). Three Masses, black vestments; our parish roster is up 11% in one year, this month.

Well I was thinking the same thing about Marini because we all know how he pulled out all of the very stunning and traditional vestments for Pope Benedict the XVI I guess you call it job security even if he might detest the vestment Francis wears as we all do. Btw she looks ridiculous dressed up as an Episcopalian bishop, I laugh every time I see her.

She was the Presiding Bishop of the Protestant Episcopal Church USA, a part of the worldwide Anglican Communion, or Church of England if you prefer!

The good news is that young Catholic and clergy are pretty much ignoring what goes on in Rome these days.

Bishop Katherine Jefferts Schori. She married Richard Schori, an Oregon State professor of topology, in 1979. Their daughter Katharine is a captain and pilot in the United States Air Force.

Bishop Katherine Jefferts Schori was raised in the Catholic Church but left when she was eight with her parents when they joined the Episcopal Church.

brings back memories of a blog long defunct, but still online just for the nostalgia
enjoy
http://badvestments.blogspot.com/
pity the author stopped post years ago, it was a hoot and a half, go back several pages it will make your eyes water

Well, at least at the All Saints Sunday requiem Eucharist at Atlanta's Cathedral of St. Philip, the dean wore a traditional chasuble and one of his fellow priests wore a damlatic (he acted as the deacon, reading the Gospel). And parts of the Eucharist were sung in Latin! More Latin than you would often find in a Catholic parish.

The Episcopal Church has been electing liberal presiding bishops since the 1980s, and the losses keep mounting---the more liberal it gets, the more people depart from its pews, even in the more conservative South. Ms. Schoris, a woman pictured in those ugly vestments, was elected with scant experience, just 5 years as the bishop of Nevada, of all places. And the current presiding bishop, Michael Curry, despite his fiery sermons which may sound evangelistic in that sense, still is just another liberal---endorsing of course same-sex "marriages." Makes you wonder if that Church will even exist by the end of this century?

But give Ms. Schori some credit for at least wearing a miter and a cope, however ugly the vestments! There are still some Episcopal bishops (the Low Church type) who don;t wear either when presiding at the Eucharist or Confirmation, or even wear a chasuble. Atlanta's Episcopal bishop is a grad of the traditionally low-church Virginia Seminary in Northern Virginia, and about the only time he wears a miter and cope or chasuble is at his cathedral (St. Philip, which is more on the "high" side). Otherwise he wears "choir dress", rochet and chimere, and an ugly stole which looks "multicultural." I don't think the Episcopal Church has anything in its canons about required clergy dress.

Schori does not even believe in God...maybe as some philosophical First Mover or First Cause...but, certainly, not the God we know. She is the worst example of the academic expression of faith, or the lack thereof. This reminds me of Niebuhr's summation of liberal theology: "It leads men without sin into a Kingdom without judgement through a Christ without a Cross."