I REMEMBER FRIDAY, NOVEMBER 22, 1963 AS THOUGH IT WAS YESTERDAY 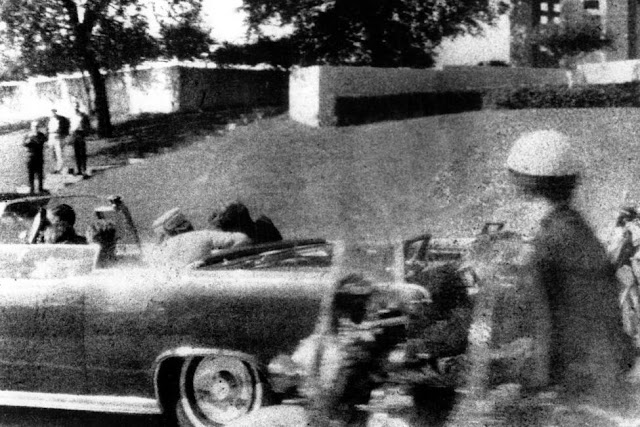 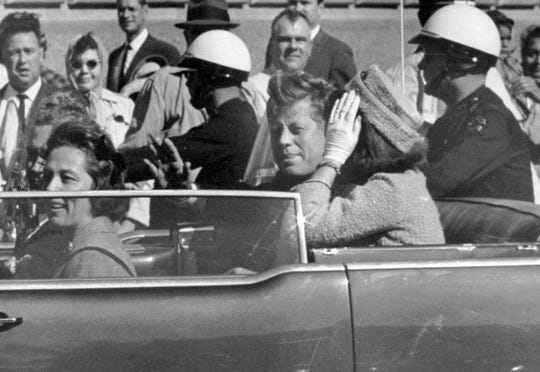 This day, November 22, 1963, is seared in my memory and feels as though it was yesterday. I was one month shy of 10 years old. I was in the 5th grade at Wheeless Road Elementary Public School. It was a Friday. Another teacher burst into our room declaring the President had been shot. Eventually CBS radio was played over the intercom because the faculty knew this was history in the making.

Once we heard the President was dead, we were let out of school early. I saw my Catholic teacher crying with Rosary in hand, Betty Casey still living in Augusta. It was a warm day but a very eerie atmosphere as I walked home. That day I learned two new vocabulary words and definitions, assassination and assassin.

I loved President Kennedy and his family. He had children close to my age. They appeared to be a good Catholic family and their Catholicism was a source of pride for us Catholics, particular us Catholics in the south who were a small minority amongst Protestants. It was the Bible Belt!

As with the Church, the mortal sins of Catholics and others, especially their sexual peccadilloes were not investigated or a major news story. It was a private matter between them, their God and family. This was before gossip and obsession with people’s sex lives was considered news.

I think it was two days later, a Sunday, when I saw on live TV the President’s assassin, assasinated himself. At the time I can remember everyone in my family overjoyed at what happened to him not realizing that the primary “person of interest” was also the one who could tell the world of any conspiracies that he was a part of. To be honest with you, I thought as a 9 year old that Vice President Johnson was responsible for it! I still wonder about that to this day. Was it a coup?

On Monday, a National Day of Mourning, we watched President Kennedy’s Low Requiem Mass on live TV from Saint Matthew’s Cathedral in Washington, DC and then the state funeral that followed with the Catholic Rite of Committal at the gravesite. It was all very impressive and terribly sad.
Posted by Fr. Allan J. McDonald at Friday, November 22, 2019

Some say that is really when the 1960s "began", in terms of the social upheaval especially as pertained to the unpopular Vietnam War. The first roughly 4 years of the 1960s were fairly tranquil, though still with their perils, like the 1961 Berlin wall crisis and the 1962 Cuban Missle Crisis. And the civil rights movement was getting stronger. But the college campuses were fairly quiet and we did not have the riots that plagued us especially between 1966 and 1968.

The assassination certainly changed security protocals---for the worse in terms of presidential accessibility. No one can imagine today any president, Trump or not, rolling into town in an open limousiene, with the route announced in advance. Or landing at the airport and shaking hands with the crowd, as Kennedy did at Love Field in Dallas about 45 minutes before the assassination. An unfortunate by-product of the times.

There was some book out a year or so ago---I think written by Roger Stone---that Johnson helped organize the assassination. Like, he helped plan the motorcade route that lead Kennedy particularly exposed. And Johnson hated being vice president and knew he would not live much past 60, so his time for ever becoming president was slipping away. But there have been countless books claiming it was others---the CIA, defense establishment, Castro, oil tycoons---feel free to add to the list!

There were lots of warnings about Kennedy going to Dallas---Stevenson has been assaulted there the month before and there was a lot of anti-Semitism in that city. Of course it has changed a lot since then--Dallas (the city) is now strongly Democratic. Always a lot of "what ifs"---what if the motorcade had gone directly to the Trade Mart (where the luncheon was to be held) from Love Field instead of through downtown Dallas? What if the Texas trip had been held in late August of 1963 (as originally discussed) when Oswald was not employed at the School Book Depository? What if it had been raining that fateful afternoon (there had been rain the night before).

Re: Presidential Security. When Jimmy Carter was coming to Savannah for St. Patrick's Day and to ride in the parade which winds through the two lane streets of our downtown, the Secret Service said, "No." If he was to be in the parade, the route would have to be changed to Abercorn Street south of DeRenne Avenue. No turns, very few buildings over two stories, four lanes, etc.

The Parade Committee said, "No. We don't change the route, even for a President!" If the only way for the President to be in the parade is to alter the route, the invitation is withdrawn." So, he didn't ride in the parade, but did address the Hibernian Society that evening.

Last St. Patrick's Day Vice President Pence came and walked in the parade for about 6 or 8 blocks. Security for a 12 square block area was tight - metal detectors and such, and there were not a few who were "bumped" from their traditional viewing spots.

No one has quite figured out why Pence came to Savannah.

When were you born? Dallas was overwhelming DEMOCRATIC in 1963,as was almost the whole of Texas, so what's the point you are trying to make? Oswald, a communist, would fit in nicely with the modern day Democratic Party

Why wouldn't Pence come to Savannah? He is vice president of the entire United States. Would you prefer an abortion - drooling Democrat, like Pelosi?

So TJM asks the point I (anomymous from 30327) is trying to make. OK, heres go...
(1) Dallas was overwhelmingly Democratic in 1963, as was almost the whole of Texas.
Really, TJM? Well, in 1952 and 1956, the state voted for Ike for president---he was a Republican, wasn't he? In 1960, JFK won Texas by only 2 points---even with LBJ on the ticket. Doesn't sound too overwhelmingly Democratic to me. TJM, care to guess how Dallas voted in the 1960 election? And in 1961, when LBJ became vice president, his Senate seat was won by a Republican, John Tower. The whole point of Kennedy going to Texas was to heal wounds in an idelogically divided party. Incidentally too, TJM, "overwhelmingly" Democratic Dallas did not vote for Jimmy Carter in either 1976 or 1980.
(2) Dallas had a reputation for intolerance---anti-Semitism, a far-right Dallas Morning News, and the Dallas First Baptist Church, led by the late W.A. Criswell, didn't always look too kindly on Catholics. LBJ and his wife got a nasty reception---maybe even spat upon---at some hotel there in 1960. Adlai Stevenson got a nasty reception there a month before the assasination. Senator Fulbright of Arkansas warned Kennedy not to go---there was concern something bad would happen if he did. Unfortunately, that proved to be the case.
(3) I was born 8 months before the assassination.
(4) JFK might not have "really" won Texas in 1960---I mean, LBJ wasn't too ethically concerned about voter fraud in his state, you know, like the dead voting. Read about his 1948 Senate "election" in which he almost certainly won via fraud. But he got bailed out by the U.S. Supreme Court.

Mister Jim Leavelle was one of the two Dallas Police detectives handcuffed to Lee Oswald when Jack Ruby shot Oswald.

Mister Leavelle was dressed in a white suit and Stetson hat. At that time, Dallas homicide detectives sported Stetsons.

Mister Leavelle died this past August. He was 99.

Anonymous said..."In 1960, JFK won Texas by only 2 points---even with LBJ on the ticket. Doesn't sound too overwhelmingly Democratic to me."

It would not be surprising that JFK won Texas with such a slim margin. His Catholicism played a major role in the viewpoints of people at the time, resulting in a very famous speech by Kennedy to Protestant ministers.

When Al Smith, also a Catholic Democrat, ran for president in 1928, he did not win Texas. Except for the election where Smith ran, Texans voted for a Democrat for president for nearly a century before Eisenhower.

Like Father, I remember well the day Kennedy died.


From Reconstruction up until the latter part of the 20th Century, politics in Texas, just as in the states of the Deep South, was dominated by the Democrat party. John Tower was an outlier at the time he was elected.
Such important American political figures as President Lyndon B. Johnson, Vice-President John Nance Garner, Speaker of the House Sam Rayburn, and Senator Ralph Yarborough were Texas Democrats. Phil Gramm? He was originally a Democrat and elected as one before switching his allegiance to the Republican party at a much later time in Texas politics.
Presidential elections are not always telling when it comes to what political party dominates in a particular state. Heavily Democrat Tennessee voted twice for Eisenhower and then for Nixon in 1960.
Georgia and the Carolinas, where it was more telling, went for Kennedy.

We are talking 1963. You like most fake Catholics can’t handle the truth. LBJ and the Governor of Texas were Democrats. Democrats founded the KKK and today support Planned Abortionhood. Talk about ignorance! I am not the typical moron who thinks CNN is “news.”

But you are typical of many who, when their errors are pointed out and corrected with facts, immediately try to divert attention to other things like KKK, Planned Parenthood, and abortion, none of which has anything whatsoever to do with the factual error you were called on.

Catholics over here (British and Irish) were proud that one of their co-religionists was the leader of the free world, and Kennedy was admired for standing up to Khrushchev over Berlin and Cuba.

The news broke in the early evening and both TV channels pulled their schedules and played solemn music until closedown (then around 11 pm).

The bad things about the Kennedy clan did not get much publicity at the time. Chappaquiddick was the turning point in the demolition of the Kennedy myth.

It was also remarked over here how shambolic the JFK funeral was compared with that of Churchill 14 months later. The comparison is a bit unfair - firstly the Brits are much better at state ceremonial, and secondly there was ample time to prepare for Churchill's, which was not available in JFK's case.

You will have to answer to God for your loyalty to the baby killer party. You are the heir to the Germans of the 1930s

The Labour Party here in Britain is in the grip of doctrinaire socialists and led by a man (Jeremy Corbyn) whose support for left-wing dictatorships and terrorist organizations is notorious. Its lunatic economic policies would turn the UK into something resembling Venezuela in three years. For decades it has seen abortion as an issue of ideology (at least the Conservatives see it as a conscience issue, and most Tory MPs opposed same-sex marriage).

In just over two weeks' time there is a General Election. The Prime Minister, Boris Johnson, is seeking a majority. He is seen by the liberal elite as a sort of educated Donald Trump and despised accordingly. However, despite his Eton and Oxford background and well-publicized marital infidelities he has strong support among white working-class male voters.

Should Corbyn become PM our only hope is that he can be ousted in a coup (and I'm not joking - I hope the CIA are up to speed with this).

However, millions of people will still vote Labour on 12 December. I certainly don't regard them as inherently wicked, nor do I assume that all Catholics are morally obliged to vote Conservative.