HOLY FATHER ALL WE NEED TO BEGIN TO RECOVER OUR OWN CATHOLIC PATRIMONY FOR THE MASS IS A SUPPLEMENT TO OUR CURRENT ORDINARY FORM MASS THAT WILL ALIGN IT MORE CLOSELY TO WHAT HAS ALREADY BEEN GRANTED TO THE ORDINARIATE'S DIVINE WORSHIP, THE MISSAL 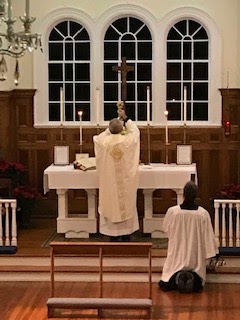 Our bishop allowed an Ordinariate priest to celebrate their Roman Missal's version of the Mass at our Pastoral Center's Chapel in Savannah.

I own a large altar missal and I love how it is set up and it is very similar to the EF's Missal. While I am happy for former Anglicans who now have a liturgy that has some of the Anglican patrimony in it, I am not asking for those additional prayers or for the use of some Elizabethan English.

What I am asking for is simply a supplement to the current Ordinary Form Missal (until it can be revised to incorporate these things into an appendix at the back of our current missal) are the following:

1. The optional use of the Prayers at the Foot of the Altar said quietly as the official Introit is chanted either in English or Latin using the Extraordinary Form of the Introit. Also the mandatory chanting of the Offertory and Communion Antiphons in addition to any anthems at this time.

2. The reordering the the Introductory Rite when the PATFOTA are used according to the Order of the EF Mass and allowing clearly ad orientem as in the EF Mass

3.  The Gradual and/or tract/sequence replacing the Responsorial psalm and clearly stating this is a legitimate option to do so

4. The offertory prayers/lavabo as in the EF and in fact using the EF Cards in Latin on the altar for these prayers which are silently prayed anyway

5. The revised rubrics for the Eucharistic Prayers to include the double genuflections at the consecrations as well as after the Per Ipsum and Great Amen.

6. The trice said "Lord I am not worthy" and kneeling for Holy Communion.

7. The reordering of the dismissal rite according to the EF Mass, with the congregation kneeling for the final blessing as the priest prays the Plaeat.

My final comment: One of the reasons people choose the Ordinary Form over the Extraordinary Form, even though they prefer the reverence and predictability of the EF Mass, is that they don't like the Latin for every part of the Mass. They prefer to be able to say or sing their parts in the vernacular. We need to accommodate this desire for the external actual participation in the Mass which Sacrosanctum Concilium desired and why the vernacular took off in the way it did in the 1960's.
Posted by Fr. Allan J. McDonald at Monday, November 04, 2019

The battle cry of the pagan Liturgical Movement was "active participation before all else" which was incorporated into the liturgical document of Vatican II.

In view of this, Fr McD's points challenge the very nature of the liturgical reforms, an accusation Bugnini made against the musicians during the fabrication of the Novus Ordo:

The Liturgical Movement was pagan, by the way, because it treated the liturgy as an idol, and idols are not just Pachamama statues.

There is nothing wrong with the EF and there is no amount tinkering that will redeem the Novus Ordo. The latter is structurally and historically inherently unstable. All the options and the various other options you recommend further add to the inherent instability.

You seem to be motivated by the conviction that the NO is here to stay. It is here to stay in our lifetime yes. But it will be abandoned by the faithful in 100-200 years time I believe. Already, the descendents of your generation or older leave the Church after confirmation rites. Only a minority of their children will remain in the faith. And cycle repeats until none is left.

The only realistic scenario is the one that recognizes that the Catholic Church "subsists" in tradition alone. That is not in the NO as is or as anyway amended.

The answer is NOT the Ordinariate Mass. It is too wordy, it doesn't flow. The answer is the Traditional Mass. Its the only way.

I was at that Ordinariate Mass at the Diocese of Savannah Pastoral Center. It was very well attended. There was a significant number of young adults there with small children. A baby girl was baptized at that Mass.

The priest did not use the PATFOTA, however, he did celebrate ad orientem and, for the first time in a very long time, I got to hear the Roman Canon in English. Overall, I thought it was a big improvement over the typical Novus Ordo Roman Mass. A very senior priest of our diocese (who used to celebrate the Latin EF Mass at the Cathedral in recent years) attended and, while I drove him back to his rectory, commented very favorably. He even questioned why the Church didn't simply do vernacular translations of the Tridentine Mass rather than coming up with the NO (something I have also wondered many times). He agreed with the ad orientem posture and made the observation that many priests "made an a-- of themselves in the (versus populum) Novus Ordo." That drew a good chuckle from me and from my dentist friend (who served the Mass)!

All this work to reinvent the wheel,..when all they really needed to do was allow the tlM in the local languages....here are some examples in English: (Westen Rite Orthodoxy)

The crucifix has recently been replaced with an icon of the crucifixion.

"HOLY FATHER ALL WE NEED TO BEGIN TO RECOVER OUR OWN CATHOLIC PATRIMONY FOR THE MASS IS A SUPPLEMENT TO OUR CURRENT ORDINARY FORM MASS THAT WILL ALIGN IT MORE CLOSELY TO WHAT HAS ALREADY BEEN GRANTED TO THE ORDINARIATE'S DIVINE WORSHIP, THE MISSAL"

Your request is reasonable, therefore you WILL include Pachamamas in the near future.

Hey Ecumenists, here are some new "hymns" you can use at your gatherings. I am sure, "Father" Martin, SJ LGBT will love them:

TJM, ‘Wind Beneath My Wings’ and ‘Lord of the Dance’ are pretty odd. Maybe they will make the cut.

The reason that people are attracted to the old Rite is because it is in Latin, not in spite of it. I have a lot to do with the so-called EF and have yet to meet a single person who wants it vernacularized; indeed, they would shun it, as would I.

If people want to say or sing their parts in English they are well catered for in the Novus Ordo.

Fr McDonald falls into the trap of confusing those parts of the liturgy which are essential with those which are incidental. The Tridentine PATFOTA fall into the latter category; other Uses, for example the Dominican, do not have them. Offertory prayers and the celebrant's prayers at the Communion vary considerably from Use to Use; hardly surprising since they were the priest's private prayers and only entered the Missal in the second millennium. Genuflexions? There aren't any in the Sarum Use, yet it's the Roman Rite.

Yet the main identifiers of the Roman Rite are a) the Roman Canon, the oldest anaphora which has been handed down to us; b) the traditional lectionary; and c) the Gregorian Propers, most of which were composed before the end of the eighth century.

The 1960s 'reformers' claimed that they were restoring ancient practices, yet the conflating of the priest's Confiteor with that of the congregation, and the conflated Communion rite (introduced in 1967 in advance of the Novus Ordo) were stark innovations.