CARDINAL MULLER, IT WON'T ONLY BE IN THE AMAZON THAT PROSYLETIZING PROTESTANT FUNDAMENTALISTS WILL CAPITALIZE ON THE IDIOTIC APOSTACY OF WORSIPPING AN ACTUAL IDOL AT THE VATICAN BUT IN THE BIBLE BELT OF THE SOUTH TOO 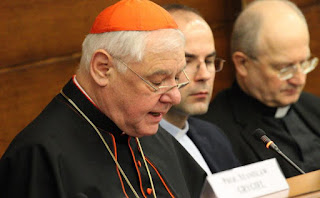 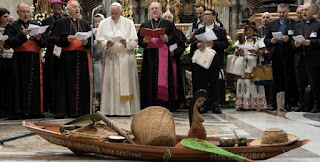 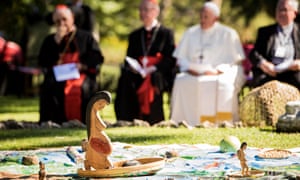 In the south, most Protestants, not all fundamentalists, believe Catholics are idol worshippers without pachamama added to the mix. They think we worship Mary and the saints in addition to Jesus and they think our statues, icons and other artwork are idols for us too.

Well, they can forget all that. Now proselytizing Protestants can show that the pope and Catholics beginning at the Vatican do worship idols, pachamama! This is stunningly sad and the pope and others responsible for this reprehensible turn of of events have made the Church a source of mockery for other Christians not in full communion with the Church and will push full communion Cathoics right out of full communion:

November 25, 2019 (LifeSiteNews) ― The Vatican’s former head of doctrine has warned that “hundreds of thousands” of Catholics from the Amazon region will leave the Church as a result of being scandalized by seeing videos of the pagan idol “Pachamama” being worshiped in ceremonies during the recently-concluded Amazon Synod in Rome.
Cardinal Gerhard Müller, 71, told Die Tagespost, a German Catholic newspaper, that photographs of the “Pachamama” carvings used during celebrations at the recent Synod on the Pan-Amazonian have exacerbated anti-Catholic feelings in the region and will spark a mass exodus.
“This whole sad story will give support to many aggressive, anti-Catholic sects in South America and elsewhere who in their polemics maintain that Catholics are idol worshipers and that the Pope who they obey is the Antichrist,” Müller said.
“Hundreds of thousands of Catholics in the Amazon area and wherever the videos of this Roman spectacle have been seen will leave the Church in protest,” he continued.
“Did anyone think about these consequences or did they just assume this was collateral damage?”
READ THE REST THERE!
Posted by Fr. Allan J. McDonald at Tuesday, November 26, 2019

Here's another story on the "fruits" of the PF Papacy. Read it and weep:

If I lived through Paul VI you can live through PF. Please remain. If you have an EF parish nearby, that might be your salvation

I think the greater threat in the USA because of the pachamama scandal is going to be our Hispanic and Latino Catholics. In the south they are already being proselytized and rather effectively by fundamentalist and non-denominational Christians. It seems South and Central Americans are more influenced by fundamentalist Protestants than American Catholics, but I could be wrong.

I guess those Mariachi Masses aren't doing the trick! Pandering to people is not the way to go

I do not know the “truth” to this whole Pachamama business. Nor, I suggest, does anyone here. But everyone here should be committed to wanting the “truth” of the matter to be discovered, if at all possible, whatever it may turn out to be. We should certainly not allow ourselves to be manipulated by those, whether within the Catholic Church or outside it, pushing this, that, or the other agenda and propagating this, that, or the other “narrative” in furtherance of such agenda. Goodness knows, we have enough of that diabolical nonsense in politics; we certainly do not need it in the Church. And we certainly should not allow it to drive us from the Church!

The Cardinal Muller and Lifesite news narrative is not the only one available. Here is another installment of a “counter-narrative”:

My own confirmation bias inclines me towards this counter-narrative. But I am okay with that because I am a Catholic and, as such, the Holy Father gets the benefit of the doubt until the contrary is clearly proven which, I submit, it has not been and, I venture to hope, will never be.

Now, if their own confirmation bias inclines others towards the anti-Francis pagan idol narrative propagated by the likes of Cardinal Muller and Lifesite News, well, that is on them. There is strong evidence supporting the alternative counter-narrative. Now make your choice.

Put another way, as we lawyers would, the Holy Father benefits from a presumption of orthodoxy. To be sure it is a rebuttable, not irrebuttable, presumption. But the burden is on those charging unorthodoxy to prove the charge, and to do so by a high standard—let’s say, “clear and convincing” (that is, a standard between a “more likely than not” or “preponderance of the evidence” standard, on the one hand, and a “beyond a reasonable doubt” standard, on the other). I submit that, so far, the evidence supporting the charge of unorthodoxy and pagan idol worship at the Vatican falls well short of “clear and convincing.”

Were I on a Scottish jury I would favour a verdict of 'not proven'. However, these days it is the perception of events rather than the events themselves which resonates the most. The Pope must have known what message he was sending, yet he seems to delight in providing ammunition for his critics.

Cardinal Müller is warning that it is easy for anti-Catholic elements to put a negative spin on these events. He is not creating a narrative which requires a counter-narrative, nor does he question PF's orthodoxy.

Anon 2, It is, at the very least, abominably poor judgement on the part of a Pope already skating on very thin theological ice...

This is off topic a bit but this is the latest from "Father" Martin, SJ LGBT:

I am gratified that you would favor a verdict of “not proven.” And I understand why, based on the portion of the Lifesite News article reproduced in the main post you interpret Cardinal Müller’s remarks as you do. But if you read the entire article I think it is pretty clear where he stands. And how about the recent article from Archbishop Vigano in Lifesite News (November 21), which contains this delicious piece of red meat?:

“The Synod on the Amazon is also part of a much larger and hidden design. It is nothing but an element, albeit a disruptive one, of a vast project, developed under the aegis of the United Nations and supported by the great financial and Masonic powers. How can we explain that the Pachamama idol is already present, through a UN initiative, in texts designed for the ideological indoctrination of children?”

Well, at least he didn’t mention black helicopters or George Soros (by name at least) (although perhaps it is only a matter of time):

Perhaps, although it is sad commentary on the debased intellectual and conversational powers characteristic of our times if good judgment now means that we have to navigate between the Scylla represented by PC excesses on the “Left” and the Charybdis represented by irrational conspiracy theories on the “Right.”

PF operates oftentimes as if George Soros is calling the shots. Their globalist tendencies (scams) are very similar

Well A2, how does one explain the Pachamama children's book put out by the UN several years ago? Especially considering Francis recently pushing the idea that we should all obey the UN.

I wondered about that and still need to research that book to see whether or not it is fairly characterized by Archbishop Vigano. I suspect not but we will see.

I am still researching the U.N. Pachamama book. It is not easy to make a determination because Pachamama can be used in several different ways. I probably need to see an actual copy. In the meantime, for perspective here is a thought-provoking Patheos article on the general topic of Christian environmentalism (spoiler alert: the author does not think it is an oxymoron), entitled “Mother Earth and Christian Environmentalism”:

I don't give much credence to conspiracy theories and the idea that the UN (which has spectacularly failed in its primary role as world peacekeeper) can organize anything, let alone 'world government', is quite frankly ludicrous.

Economic interdependence is one thing, but the tendency over recent decades is for 'superstates' to disintegrate. The Soviet Union, Yugoslavia and Czechoslovakia come to mind; Spain has its Catalan problem, and even in the UK the Scots are squirling and hooting about independence, and not a few English would say 'good riddance'. The grand EU federal project has hit the buffers. Even the iron grip of the Communist Party cannot guarantee that China will not fall apart before the end of the century.

As far as the Amazon synod is concerned, I shall reserve judgement until the release of the Apostolic Exhortation (which has probably been written some time ago, but we don't know by whom).

Confucius he say: 'Man who sits on fence too long gets splinters in arse.'