SAINT JOSEPH'S IMMACULATE CONCEPTION EXTRAORDINARY FORM MASS, YES VIRGINIA, "FULL, ACTIVE AND CONSCIOUS PARTICIPATION" CAN BE AND IS BEING PROMOTED IN THE CELEBRATION OF THE 1962 MISSAL AS VATICAN II ENVISIONED FOR ANY FORM OF THE MASS IN ANY RITE 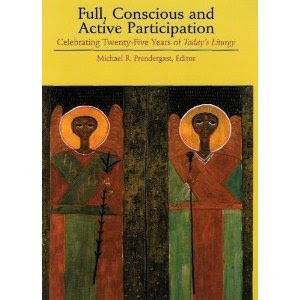 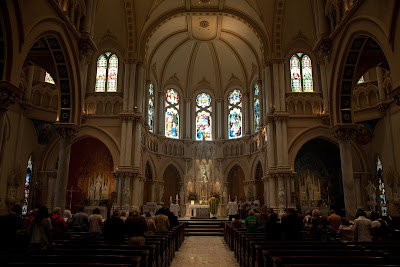 Below the following quotes, I have posted the video of our Solemnity of the Immaculate Conception Extraordinary Form Sung Mass digitized for us by Mr. Lovel Miguel in Houston, Texas. Many thanks to him! Please note the "full, active and conscious participation" of all who are present, clergy and laity alike, including children. Never, never, ever, let anyone tell you that in the Latin Mass of the Extraordinary Form there can't be the noble simplicity of full, conscious, active participation of all present. If you are told that, either in the present expression of this Mass or its expression in pre-Vatican II times, please know that it is a bald face lie! The article below I happened upon when trying to find Vatican II quotes on "Full, Active and Conscious Participation."

One of the phrases heard often when speaking of the post conciliar liturgy is the call to “full, active and conscious participation”. The council fathers in the document on the liturgy put it in these words,

Mother Church earnestly desires that all the faithful should be led to that fully conscious, and active participation in liturgical celebrations which is demanded by the very nature of the liturgy. Such participation by the Christian people as “a chosen race, a royal priesthood, a holy nation, a redeemed people (1 Pet. 2:9; cf. 2:4-5), is their right and duty by reason of their baptism.

In the restoration and promotion of the sacred liturgy, this full and active participation by all the people is the aim to be considered before all else; for it is the primary and indispensable source from which the faithful are to derive the true Christian spirit; and therefore pastors of souls must zealously strive to achieve it, by means of the necessary instruction, in all their pastoral work.

Recently at St. Thomas [Church] I embarked upon a series of homilies meant to remind our parish of what this full, active and conscious participation might look like.

First, I challenged the parish that full participation means that one must be present for the entire liturgy, meaning that one arrives early enough to prepare for mass and stays through the singing of the closing hymn. Growing up it seems to me that too much emphasis was put on what was the minimum amount of time one could be at mass for it to “count”. This seems overly legalistic to me and tends to promote the idea that we are somehow earning points with God by coming to mass rather than our worship expressing our thanks for the salvation he has freely given to us.

Second, I encouraged them to actively participate by engaging in all parts of the liturgy while looking for the message God was sending to each one of us every time we step into the church for mass. This outward participation is not only for ourselves, but by doing all we can to participate we share the work of the liturgy and help each other to actively pray.

Third, I suggested that not only is it the outward signs of our participation that are important, but that we are conscious of what it is we are doing when we gather to pray. It is not enough to simply say the words of the prayers, to participate in the singing, to make the sign of the cross, etc. if there is not something deeper happening within each one of us. This process of transformation must be ever deepening each week when we attend the liturgy together.

My hope is that by beginning with these three simple practices we can begin to deepen our prayer together and participate fully, actively and consciously each time we gather for the celebration of the Eucharist.

Thanks for posting the video. I would have employed the deacon as MC and you would still have two acolytes and a thurifer. Would it be possible to use the front kneelers as a temporary altar rail?

I'm all for FCAP as long as it doesn't become a shibboleth. In the Eastern Churches the faithful are not required to be present for the whole liturgy, and the same applied to the long medieval Cathedral liturgies in the West. The Fourth Lateran Council (1215) ruled that to fulfill the obligation the faithful need to be present for the Offertory, Consecration and Priest's Communion, and this still applies.

We are in the process of acquiring a vintage marble altar railing from a church being closed, (the railing much nicer and more complimentary to the one that was removed in 2006). In fact I have the railing already donated by a few donors. We need to extend the first step leading to the altar to accommodate the railing, so that there is room for one to kneel in front of it and the priest to walk behind it comfortably. Unfortunately, we will lose on set of pews across the front of the Church which amounts to about 30 seats, so that the aisle in front of the altar railing is wide enough for traffic during Communion time. This will entail construction and an added expense. Hopefully work will begin during Lent and completed before Holy Week!

I pray that this altar railing thing is a liturgical sign of hope in the Diocese of Savannah (not just limited to St. Joseph in Macon!). May it be the first of many altar rails to be installed (whether in historic churches or in newer ones) throughout the Diocese!

Thank you for this Fr. McDonald. While I am nowhere near your parish, know that you have my support, fully.

This truly is blessed and wonderful news!!!

Our altar/communion rail is still intact at Most Holy Trinity in Augusta. (Thanks be to God and Mr. John Holleran from 1990-1991.) Unfortunately, the last time it was used was at our first TLM since 1965 said on November 22, 2009. Please pray for the restoration of a monthly traditional Latin Mass at Most Holy Trinity.

Our altar/communion railing is still intact at Most Holy Trinity in Augusta. (Thanks be to God and Mr. John Holleran from 1990-1991.) Unfortunately, it hasn't been used for the distribution of Holy Communion since the first and last TLM said at MHT since 1965 happened on November 22, 2009. Please pray for at least a monthly Sunday traditional Latin Mass.

Joseph, I assure you, this hopeful sign is DEFINITELY limited to St Joseph. Nothing that is happening at St Joseph is being mirrored at other Savannah Diocesan Parishes. It will in time, but the crusty old Pastors will not let it yet. The crop of Parochial Vicars in this Diocese are VERY Orthodox, and when they ascend to being Pastor's themselves, then change will come. But for the moment, only Father MacDonald stands for Tradition in this Diocese.

Templar, unfortunately I have to pretty much agree with your realistic assessment of the present situation in our Savannah Diocese. Still, I have to cheer on such efforts as this altar rail installation in Macon.

I grew up in the Cold War era and I remember references to the Communists "exporting their revolution" (a very bad thing indeed--we were right to try and contain it and prevent its "export"). Now, in another context in a later time, I am a staunch advocate of "exporting the revolution" of spreading the Extraordinary Form (TLM) and restoring positive pre-Conciliar practices to the Ordinary Form (such as Communion rails) in the Diocese of Savannah. To advocate these things means, first of all, praying for them, supporting and encouraging priests to be bold and implement them, and helping to educate and inform others (especially children and younger people) about these things. God is in command and he has delegated the clergy to govern us but our part is to do what we can to support what we know is right and just.

About one Sunday in four I have been making the 40 minute drive across the county to a little church in Chesham Bois which offers an EF Mass at a convenient time (every Sunday at 10 am). The Parish Priest, Fr Bernard Davenport, died on 11 December, aged 85. He was a priest for 60 years, and had been PP at Our Lady's since 1982. He was in poor health but soldiered on, saying he wouldn't leave until he was carried out. His Latin was wonderfully fluent, and his Mass was the only Latin Mass in the whole of Buckinghamshire.

At present the 10 am TLM is being covered by visiting priests, but the future is uncertain. Our Lady's is the oldest church in the Chesham area, built more than a century ago when the Catholic population was quite small, but the two neighbouring parishes, erected in the 1960s, are larger, and it is my guess that the Bishop will want to close it. The diocese have rushed out a questionnaire to find out how many people attend, and how far they have travelled.

Please pray for the repose of the soul of a remarkable and heroic pastor.

What happens if a priest requests leave from his bishop, then, instead of returning to his duties, starts dating and eventually enters an invalid marriage. Isn't that scandalous? Is there any penalty from the Church? Or from God? It seem to me one who turns his back on his vows turns his back on Christ since those vows were made to Christ. Wouldn't you agree? What could account for such a lack of conscience considering all of the spiritual and financial support he's received from the Catholic people to help him become a priest? It seems so sinful on many levels. It reminds me of Judas stealing from the common purse. I can only imagine that the Holy Eucharist means nothing to a man like that, even less than his own integrity or self respect. How unworthy!