DISCIPLES OF THE SCHOOL OF THEOLOGY OF RATZINGER WILL DELIGHT IN THIS! 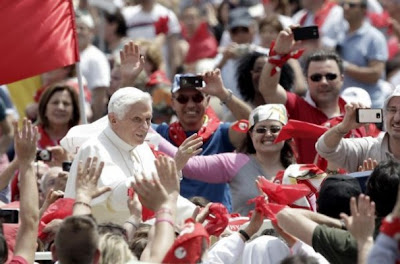 The Holy Father telling it like it is, so refreshing to the common senses of the faith!

From Catholic World News, December 7, 2012, Vigil of Our Lady of the Immaculate Conception:

Pope Benedict XVI provided direct answers to critics of Catholic teaching, both inside and outside the Church, in a December 7 address to members of the International Theological Commission.

After praising the group for its efforts to “present, so to speak, the genetic code of Catholic theology,” the Pope tackled two popular errors: the belief that the “sense of the faithful” can be used in defense of theological dissent; and the belief that organized religion is a source of international conflicts.

Regarding the sensus fidelium, which is frequently invoked to justify calls for change in controversial Church teachings, the Pope reminded his audience that the term refers to “a kind of supernatural instinct” among the faithful. He underlined the importance of this sense, quoting the Vatican II document Lumen Gentium: “The entire body of the faithful, anointed as they are by the Holy One, cannot err in matters of belief.”

However, the Pope said, the sensus fidelium presumes a deep attachment to the faith, and cannot be reduced to a matter of prevailing public opinion. He continued:

And it is unthinkable to mention it in order to challenge the teachings of the magisterium, this because the sensus fidei can not grow authentically in the believer except to the extent in which he or she fully participates in the life of the Church, and this requires a responsible adherence to her magisterium.

Pope Benedict then addressed the charge that “religions, especially the monotheistic religions, would inherently be bearers of violence, mainly because of the claim that they advance the existence of a universal truth.” By that logic, he observed, peace can be assured only by shutting off discussion of absolute truth. But in fact, he argued, such a move itself leads to open conflict and violence:

When you deny the opportunity for people to refer to an objective truth, dialogue is rendered impossible and violence, whether declared or hidden, becomes the rule of law of human relationships. Without openness to the transcendent, which allows us to find answers to questions on the meaning of life and how to live a moral life, mankind becomes unable to act in accordance with justice and work for peace.
Posted by Fr. Allan J. McDonald at Saturday, December 08, 2012

Pope Benedict is certainly thought-provoking. In the same address he writes:

“[T]he form that the final revelation of the mystery of God takes in the life and death of Jesus Christ, who goes towards the Cross as ‘a lamb led to the slaughter’ (Is 53:7), needs to be underlined. The Lord attests to a radical rejection of all forms of hatred and violence in favor of the absolute primacy of agape. If, therefore, in history there have been or are forms of violence carried out in the name of God, these are not to be attributed to monotheism, but historical causes, mainly the result of human errors.”

And in the article linked by Father McDonald in the previous post the Holy Father writes, in opposing a “relativistic” ecumenism that overlooks the fact of tragic rupture:

“The vision of the Council is quite different: the fact that in the Catholic Church is present the subsistit of the one subject the Church, is not at all the merit of Catholics, but is solely God’s work, which he makes endure despite the continuous unworthiness of the human subjects. They cannot boast of anything, but can only admire the fidelity of God, with shame for their sins and at the same time great thanks. But the effect of their own sins can be seen: the whole world sees the spectacle of the divided and opposing Christian communities, reciprocally making their own claims to truth and thus clearly frustrating the prayer of Christ on the eve of his Passion. Whereas division as a historical reality can be perceived by each person, the subsistence of the one Church in the concrete form of the Catholic Church can be seen as such only through faith.

“Since the Second Vatican Council was conscious of this paradox, it proclaimed the duty of ecumenism as a search for true unity, and entrusted it to the Church of the future.”

One can also put the two thoughts together and note the practice of violence not just between religions (Christianity and Islam during the era of the Crusades, for example) but also within them (Catholics versus Protestants in the Wars of Religion and Sunnis versus Shi’a in the counterpart conflicts within Islam, for example).