LITURGICAL ABUSE IS RAMPANT IN 2012! IT HAS NOT GONE THE WAY OF THE CLOWNS AT ALL 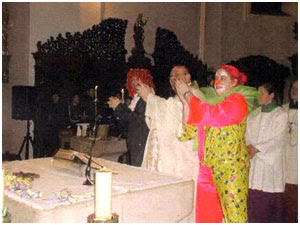 Those who are opposed to the common sense reform of the reform in continuity that our Holy Father is promoting and will in fact be his legacy, often chastise those of us who care about the "re-enchantment" of the liturgy for dwelling on the liturgical abuses of the 1970's especially clown Masses. They think we still live in the past and that the present has no such abuse any more. Think again.

The following I copy from the National Catholic Register's Blog by Dan Burke which you can read at the Register with comments that follow it, by pressing this sentence.

What are your liturgical abuse nightmares of recent times?

Tidings of discomfort and liturgical abuse

This Christmas, I was delighted to have the opportunity to travel across at least three states to celebrate the joy of this season with my family. This was the good news. The bad news? I was pelted to a spiritual pulp by liturgical abuse after abuse. Because the Mass in my home parish is faithful, I have not had to endure this level of concentrated torture for some time — and, frankly, the shock was a bit much to take.

So I share with you here a list of the dastardly deeds of the ignorant, sloppy, slothful, unfaithful and the well intended. Each of these listed below is prohibited by the liturgical norms or other instructions from the Holy See or is an omission contrary to expressed guidance provided by the Church:

• Changing of the prayers by the priest (absolutely forbidden).

• Standing when the rubrics instruct us to kneel (diocese-wide disobedience to the Holy See).

• Tropes repeated at the singing of the “Lamb of God” (recently clarified by the Holy See as inappropriate and forbidden).

• Priests, deacons and laypeople scrambling around the altar before Mass with no indication — other than a few rapid half bird-pecks toward the tabernacle — that they believe that Christ is actually present in the tabernacle.

• The use of an extraordinary minister of Communion when there were less then 10 people in a daily Mass that was presided over by an able deacon and an able priest.

• Priests and people running around the sanctuary to offer the sign of peace.

• No observation of silence before Mass, except at a midnight Mass at a faithful monastery.

• Applause and praise to individuals at Mass during the Mass (directed at my own family, which was even more embarrassing). Here’s a quote from Pope Benedict on this practice (with my emphasis): “Wherever applause breaks out in the liturgy because of some human achievement, it is a sure sign that the essence of liturgy has totally disappeared and been replaced by a kind of religious entertainment. Such attraction fades quickly — it cannot compete in the market of leisure pursuits, incorporating as it increasingly does various forms of religious titillation.” I was chastised by a parishioner for bristling at this and was told that the applause was to God. However, we were the only ones asked to stand and if the applause was directed to God, me and my family should be added to the ranks of the Blessed Trinity. I really do appreciate the sentiment — it was honoring and sincere — but if it is necessary or appropriate, please, please, please do this after Mass or some other time. The Mass is to bring us to worship Christ, not us.)

• Hand-holding during the Our Father — with one extraordinarily silly, though I am sure well-intentioned, contortionist even reaching backward while facing forward in order to connect the two rows of pews. (This is forbidden on the basis that we are not allowed to add or change the Mass.)

• Only one Mass of many offered “primacy of place” to sacred polyphony or chant. This Mass was at a monastery and was beautiful and liturgically faithful and Christ centered end to end. It was the highpoint and salvation of my vacation time.

• A Sunday Mass that did not include a single Advent hymn (not an abuse, but the band leaders should be retired to a local piano lounge).

• A priest who declared that Zachariah (the father of John the Baptist) was struck blind, not dumb. (No, this is not liturgical abuse, but the priest should be ashamed. It was clear that he had much to say but little concern for the central message of Advent and had not prepared for his homily.)

I became Catholic because I recognized that the Church has properly claimed that it is the Church of Christ. The Church teaches, admonishes and instructs by the authority of Christ and 2,000 years of wisdom and guidance by the Holy Spirit. I obey the Church because I obey Christ. I am not a protestant who is free to make up whatever I feel is best without any concern for Tradition. I am a Catholic. I am unashamedly submitted to Christ and his Church. If you are not, you are not Catholic. Let’s stop pretending.

Care to fuel the fire of my outrage — or, hopefully, calm my nerves? What did you experience?

MY FINAL COMMENT: And still there are priests who think a Volkswagen of a Mass that has all of the above does not account for the fact that nearly 80% of Catholics do not come to this rubbish any more and find God in other ways. Priests who think that way should be sued for malpractice!
Posted by Fr. Allan J. McDonald at Saturday, December 29, 2012

I count at least two of these abuses are common occurrences at St. Joseph's.

I agree that couple of items mentioned may well be common practice at St. Joseph, Macon. Still, I am so spoiled by the Masses I attend there that while visiting two other local churches during the break in Prep for the holidays, I find myself becoming frustrated with the disparity in reverence. The Mass at St Joseph may lack total perfection, but when I ask myself where else can I go for the truth and reverence to which I have become accustomed - I find no answer. Some polishing may still be needed, but still it holds a bright gleam for me.

"Priests who think that way should be sued for malpractice!

Until the Holy Father enforces liturgical law, this will continue to happen.

There must be consequences.

He MUST move out of the hypothetical/theoretical and start defending his writings and views. He is a temporal leader as well as a spiritual leader.

ytc, what exactly are the meaningful differences as far as you're concerned? Moreover, is it negative to compare the current pope with one who is well on the path to canonization (having recently had his "heroic virtue" extolled)?

The author says: “Only one Mass of many offered ‘primacy of place’ to sacred polyphony or chant. This Mass was at a monastery and was beautiful and liturgically faithful and Christ centered end to end. It was the highpoint and salvation of my vacation time.”

In my experience, and to my taste, there is very little that can surpass the other-worldly meditative quality, pace, and serenity of a monastic Mass or monastic communal prayers characterized by sacred chant.