HOW MANY PARISHES THROUGHOUT THE WORLD DEPRIVED THEIR PARISHIONERS OF SACRED SCRIPTURE FOR THE INTROIT OF GAUDETE SUNDAY? AND HOW MANY PRIESTS AND DEACONS ACTUALLY WORE ROSE?

First for a bit of humor on this Gaudete Sunday, before I get into the serious stuff:

With all the preoccupation concerning the sexuality of priests these days, this is a group photo of Fr. Dawid Kwiatkowski, our parochial vicar, our deacons, Don Coates and Tom Eden and me. I seldom if ever wear an amice, but last night the amice served a very good purpose. We wanted to remain anonymous during the celebration of our Gaudete Sunday Vigil Mass last night as we donned our fancy pink. I suspect we should take this route too when we wear lavender. Do real priests wear pink? Are amices good for anything? 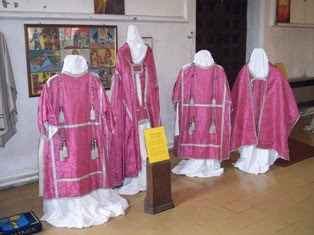 Please note how the Introit for Gaudete Sunday when chanted offers both sides of the reality of life, the need to rejoice even in the face of tragedy and exile. The melody is somewhat sad and yearning for something more, the words are the reality of what we expect, future salvation! However, our congregations which have now become accustomed to happy-clappy (my spell check is trying to tell me to change "clappy" to "crappy" maybe he knows something?) music of pop culture set to sacred words, an artificial spirituality of our own manufacturing and an artificial light that fails to illuminate the soul, will they like how the following Introits sound? Will they get it?

Or in modern English chant:

Rejoice in the Lord always : again I say: Rejoice. Let your modesty be known to all men: for the Lord is nigh. Be nothing solicitous; but in every thing, by prayer let your petitions be made known unto God. Ps. 84:2: Thou hast blessed thy land, O Lord : thou hast turned away the captivity of Jacob. Glory be to the Father...

Did you or will you hear the actual entrance chant of the Mass for the Third Sunday of Advent also known as Gaudete Sunday? Did your priest and deacon wear rose?

This Gaudete Sunday there are many who are questioning what this Introit Scripture is teaching us and by which we use it to worship God. Innocence has been taken from children and once again from our country. How can we rejoice in the face of such devastation visited on our brothers and sisters, our children in NewTown, Connecticut?

Even the young seem to sense that a manufactured faith of artificial light is a useless faith and that meaning and purpose can be found elsewhere, like bars and opium dens.

But there are still others who find true meaning in life when life seems so meaningless and tragic. They are the young who yearn for something more than plastic, manufactured faith, they yearn for orthodoxy, tradition and a sense of rootedness in the kingdom of God, not the kingdom of mammon.

Yesterday I met with an 18 year old senior from a public high school who lives in a small Georgia town 30 minutes south of Macon. Ever since he watched Pope John Paul II's funeral on television almost eight years ago, when he was 10, he has been fascinated with the Catholic faith and her traditions, her orthodoxy.

He started coming to Mass about a couple of months ago, driving to Macon for it. He's been here four times for Mass and this past Sunday God struck him in a way he hadn't been struck before. He attended our 12:10 PM Mass, with our 29 year old Parochial, orthodox vicar preaching the Mass celebrated ad orientem for the Liturgy of the Eucharist, completely sung, with incense and bells and the option to kneel and receiving Holy Communion by way of intinction on the tongue.

He also has been reading my blog. I told him there were other Catholic Churches closer to his town and asked him why he was driving to Macon and St. Joseph. He said he loves the traditional architecture of St. Joseph and our ORTHODOXY! His word, not mine! This from an 18 year old man, who is a senior in a southern public high school.

He will be joining our Inquiry phase of our RCIA starting in January and God willing will be baptized, confirmed and receive Holy Communion at the Easter Vigil of 2014! Pray for him.

Jeffrey Tucker at the Chant Cafe tells of a tail of two churches:

[The first church] "the brand of Christianity they are selling is what one might call fashionable in an academic sense. Every effort is made to avoid what might be called Christian orthodoxy. Homilies are community conversations in which every expression of any idea is considered right. People who suggest the truth of basic points of the Nicene Creed are looked upon with suspicion. The social activities revolve around political issues like the environment, racial justice, and LGBT concerns. If you believe something approximating what Christians have always believed, you have to prepared to be schooled in the ways of the modern world.

The other (church) provide(s) what you might expect from religious institutions: actual belief. People pray. There is teaching. There is liturgical form. There are Bible studies and people seek truth in the Scriptures. Christians are not looked upon as the bad guys of all human history. Reverence and seriousness dominates the services. Social activities presume a faith commitment. They celebrate the joyfulness of Christian life rather than sit around grousing about social and political problems like racism, inequality, and environmental decay. To be sure, these active Churches all have different doctrines and traditions, but whatever they are, each is proclaimed and practiced with conviction.

Trends in the Catholic Church today seem to be on the right side of history. The new English Missal takes the faith seriously. We are slowly backing away from the trends of the past decades to ignore the liturgical music tradition and replace it with fashionable pop songs. Parishes are realizing that Catholicism itself has a certain cultural cache because it, nearly alone, has stuck by truth and stood up to the powers that be, even in the face of relentless persecution. There is a certain heroism about professing the Catholic faith today.

And even within the Catholic framework, differences are emerging between the flimsy faith of the contemporary past and the new traditionalism. Among the traditional orders, we are seeing expansion but among those who bought into the temporary mushheadedness, we see faltering and decay. Publishers like Ignatius Press are booming while others are not. The programs of the Church Music Association of America are packed to capacity but not so with others.

A Christianity that doesn’t believe in itself lives for a while on momentum of the past but doesn’t have much of a future. A Christianity that is authentic renews itself regardless of the changing times precisely because it makes its foundation the eternal truths that transcend the passage of time."

Ahh...you are in good humor on this Gaudete Sunday morning, Father!!

Jeffrey is so very right. I am glad to hear that another young man is converting to the Faith. It is very lonely for young people who take it seriously. It is rather depressing.

In this culture of rampant homosexuality within the priesthood, I have a real problem with the term "pink" when speaking about rose vestments on Gaudete and Laetare Sundays.

I know that it is an attempt at humor, but this is not a situation where we should be talking about pinks or "fancy" pinks, we should be speaking of what the liturgical color truly is.

Look at the GIRM. What does the GIRM say about vestment colors? Pink is not one of them. So, if a priest is wearing pink, he is wearing a color that is illicit as blue.

I have many peccadilloes when it comes to liturgical accuracy, but in this age of rampant homosexuality be combated in the clergy, I think that it be best to avoid any unnecessary scrutiny.

Surely, everyone here can agree with that, no?

The statement by Jeffrey Tucker is good. I think that the backing away will lead eventually to the abandonment of the vernacular all together, as it really has no historical place in the liturgy, with the very frail exception of a couple of indults (namely, the Slavs and the Iriquois; the Chinese (oft cited) actually failed and Latin was re-instated).

I would like you, Fr McDonald and the others who comment on this site, to consider the following. St Aloysius church in Oxford has since 1993 been served by the Fathers of the Oratory (making it the third English Oratory after Birmingham and London). Until 1981 it was (as its name suggests) the Jesuit church. It was built in 1875 (architect J Hansom) in the French Gothic style with a polychrome interior. Newman preached here and Gerard Manley Hopkins was curate (parochial vicar)for a time.

In 1954 the Js decided to repaint the entire interior in a uniform 'battleship grey'. After Vatican II things got worse. Most of the statues were torn out. The church had a large number of relics, which were burnt, and their containers disposed of. The vestments, which included mitres which had belonged to Pio Nono, were sold off to theatrical companies. Do not presume to tell me that those who did this were well-meaning - it was positively Satanic.

Thankfully the parish is now thriving, the church restored to its former glory (although the restoration is ongoing) and the Holy Sacrifice of the Mass is offered in both forms with the utmost reverence. The Sunday Solemn OF Latin Mass is standing room only, and is offered ad orientem.

Rosaceus or roseus is pink in Latin (cf French 'rose') and although I have seen Gothic sets which appear to be a deep brick-red, Roman-style vestments are, well, pink. In any case 'pinko' to my generation signfied a closet communist, not a sodomite.

We're not supposed to use Latin, just English. LOL!!!!! Point taken, however, I think that in the current climate of homosexuality which is being combated in the ranks of the clergy, prudence still reigns.